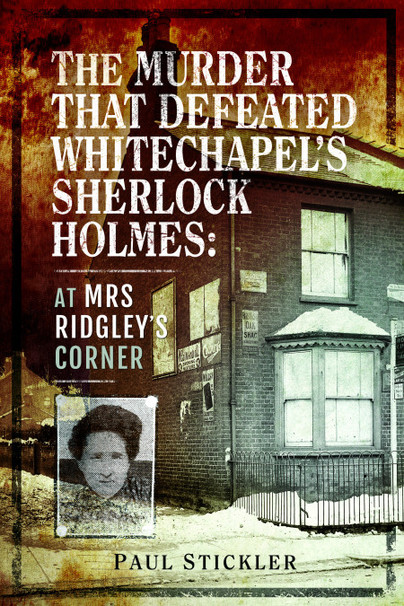 An article written by the author for Dan Snow's History Hit: 'The Murder that Defeated Whitechapel's Sherlock Holmes'

Get The Murder that Defeated Whitechapel's Sherlock Holmes (Kindle) for FREE when you purchase 2 other eBooks.
Need a currency converter? Check XE.com for live rates

In 1919, when a shopkeeper and her dog were found dead in Hitchin, Hertfordshire with brutal head injuries, there followed an extraordinary catalogue of events and a local police investigation which concluded that both had died as a result of a tragic accident. A second investigation by Scotland Yard led to the arrest of an Irish war veteran, but the outcome was far from conclusive.

Written from the perspective of the main characters involved and drawing on original and newly-discovered material, this book exposes the frailties of county policing just after the First World War and how it led to fundamental changes in methods of murder investigations.

Offering a unique balance of story-telling and analysis, the book raises a number of unanswered questions. These are dealt with in the final chapter by the author’s commentary drawing upon his expertise.

2 page author article as featured by

The author takes the reader through the investigation in great detail using records from the time period and trial transcripts as much as possible. This crime took place 100 years ago but boy how things have changed since them. This book would be a great pick for true crime lovers or anyone interested in police work.

The writer has done a great deal of research and his skill as a writer is evidenced in the way he seamlessly creates an involving narrative that never calls undue attention to it.

This is a quick read, being a mere 187 pages, and it will keep you guessing, and questioning. The photos add to the mystery. Paul Stickler has done an intense job of research into Mrs. Ridgley's murder/accidental fall. Who knows..and the mystery continues!

Paul Stickler describes the events of February to July 1919 from the point of view of the participants and then provides a chapter of commentary on the investigation, the trial and questions that weren’t answered. The storytelling is very effective and the commentary thoughtful, bringing up important questions and setting the crime in the context of Britain in 1919. A useful insight into the time and place, as well as policing in the counties in the early twentieth century.

'Stickler’s professional experience results in a book where you feel he has really attempted to get under the skin of the investigating police – to see what they saw, to analyse the evidence, and to point the reader in the right direction.'

★★★★★ ...this is a well-written and well-researched book. There were a number of well-publicised murder investigations in the early 20th Century and although this was not one of them, many of those cases were undertaken by the Yard’s foremost detective, Fred Wensley, as he did on this occasion.

In 1919, a woman who owned a shop in Hertfordshire was found battered to death, as was her dog. The initial investigation was horrendous; the local uniform superintendent wrote this off as an accident, which prompted the county’s chief constable to ask for Scotland Yard’s assistance and Wensley was sent, some 10 days later. It’s not a spoiler to say that Wensley was unsuccessful – that’s contained in the book’s title – but this book explains why and whilst much of Paul Stickler’s information has come from the depositions used in the case, it doesn’t read as though he’s quoting directly from the statements. He has written a very clever narrative which draws the reader into the investigation and which makes this a very readable book, indeed.

Paul Stickler joined Hampshire Constabulary in 1978 and spent the majority of his time in CID. He spent many years involved in murder investigations and was seconded to the FBI Academy in Quantico, Virginia to study international perspectives of crime investigation. Since his retirement in 2008 he has combined his professional knowledge with his passion for history, researching murders in the first half of the twentieth century. He spends his days delivering lectures to a wide range of audiences. More can be found out about him on his website: www.historicalmurders.com

The body of shopkeeper Mrs Ridgley is discovered

Mrs Ridgley, a shopkeeper, and her dog were found dead in Hitchin, Hertfordshire with brutal head injuries on 25 January 1919. In The Murder that Defeated Whitechapel's Sherlock Holmes, author Paul Stickler concludes with his own investigation of who did the crime, but the killer is still unknown to this day.