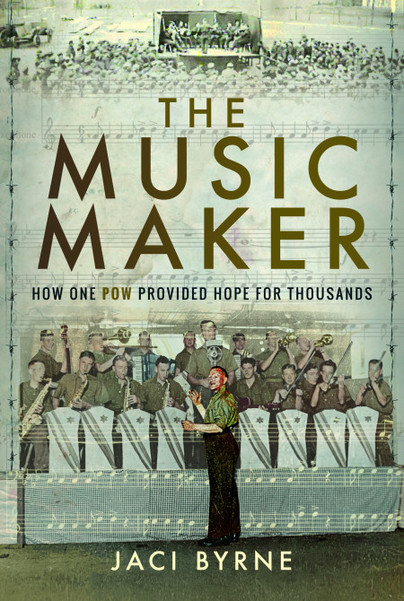 How one POW Provided Hope for Thousands

As seen in the Daily Mail, June 2019: 'The Music Maker of Auschwitz: British POW locked in a death camp and forced to play for his Nazi jailers detailed the horrors he faced in a secret war diary'

You'll be £4.99 closer to your next £10.00 credit when you purchase The Music Maker. What's this?
Need a currency converter? Check XE.com for live rates

On 8 May 1945, 46-year-old Drum Major Jackson staggered towards his American liberators. Emaciated, dressed in rags, his decayed boots held together with string, he’d been force-marched for twenty days over the Austrian Alps after five heinous years as a POW in Nazi labour camps. He collapsed into his liberators’ arms, clinging to his only meaningful possession—his war diary.

Having already experienced the horrific nature of battle in the First World War, Jackson continued as a drum major in the Territorial Army, as well as leading a dance band throughout the 1920s. Following Britain's declaration of war against Germany in 1939, he went off to war once again and was captured during the Allied retreat to Dunkirk in 1940.

When the Germans learned of his musical abilities, he was put in charge of forming a band. They called him the 'Kapellmeister', literally, 'the man in charge of making music', and over the next five years, Jackson and his fellow bandmates would entertain the Germans with concerts and shows in various labour camps throughout occupied Poland.

In this captivating testament to human endurance, Jackson’s granddaughter has used his personal diary and photographs to tell the unforgettable and gripping true story about the life and times of a humble man who, through his passion for music, overcame extreme adversity.

The Music Maker of Auschwitz: British POW locked in a death camp and forced to play for his Nazi jailers detailed the horrors he faced in a secret war diary

What a story and what a moving book! Having just finished it, I am still in a bit of a state of shock... This is an outstanding book. One to add to your Christmas list!

The book, published by Pen & Sword, is a story of a strong and simple man who found himself in two world wars, with two great passions, the one for music that helped him survive and the one for his wife who, perhaps, helped him to to live.

Article: 'The PoW who gave hope to thousands of others' as featured by

A superb biopic about one man whose passion for music gained the respect of his captors as he took over the entertainent of fellow prisoners of war, and after the war made a career for himself in the music industry. A larger than life man, an extraordinary story.

From the moment I picked up this book I was immersed in “Drummie’s” world and the immense courage he showed. It made me appreciate the world my own grandfather faced, locked up in a POW camp in Korea before liberation.
I could not put this book down and I agree that it is a must read!

My congratulations go to the author Jaci Byrne on what is the most wonderful read. An inspirational tale of survival in a POW camp during WW2, and the fact that Harry was able to keep a diary for all that time to document what would have been an incredible ordeal in itself is amazing. I laughed and I cried. Well done.

I found it The Music Maker the most harrowing and emotional book I have ever read. To read something like this from the diary of a man taken prisoner by the Germans and spending almost six years at WWII and five as a POW, is heart-wrenching. The courage, strength, determination, and downright guts it took for these men (and women) to survive is incredible. Personally, I think this story should be compulsory reading in high schools both here and overseas. For students to read a story like this, one actually from the mouth of a POW, I am sure would keep in their minds just the sacrifices these men and women made for their freedom. From the POWs who withstood capture, torture, starvation and more, to the women back home who kept our countries running, and those who sacrificed their lives for their freedom, I feel this beautifully written book is a must-read for everyone.

I am in my eighties and my daughter bought me The Music Maker for Father’s Day this year. I am not a big reader, but I started the book one morning soon after receiving it and I did not look up until the following afternoon! I could not put it down, so much so that my wife kept checking on me! I loved the fact that it was easy to read and so engaging. I’m an Australian and most of the literature on WWII I have read has been pertaining to the Pacific theatre, so it was fascinating to read about the war in Europe from this amazing man’s perspective. Absolutely 5 stars from me!

Well I’ve just finished The Music Maker…. what a wretched, emotional journey I’ve been on with Harry Jackson and his fellow prisoners. To display such stout-heartedness and resilience in the face of such adversity shows the backbone of men of their day, the love of music and performance transcending both sides of the war and allowing Jackson to keep his sanity intact (although performing for the enemy was to be endured not enjoyed). Drum Major Henry Barnes Jackson went to hell and back, the love of his wife and family sustaining him through all. Thank you for the privilege of allowing me to swim into the depths of your family’s fortitude, Jaci Byrne.

I have just finished The Music Maker by Jaci Byrne, and what a read! A true account of life as a prisoner of war in WWII, this gripping, heart-wrenching story is so beautifully written. I couldn’t put it down & now feel sad it is finished. Such a privilege to read about this wonderful man.

The Music Maker is an incredible story, an inspiring book based on Drum Major Jackson’s treasured WWII POW diaries. Written for all audiences, Jaci Byrne has written this story with truth & sensitivity which will resonate to everyone who reads it. Good on you Jaci Byrne.

Jaci Byrne is the granddaughter of The Music Maker, the late Drum Major Henry Barnes Jackson. A full-time writer, Byrne has published four novels and a series of children’s books. This is her first work of non-fiction. She lives in Avalon Beach, Sydney.