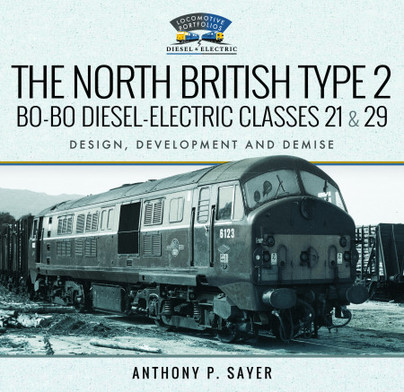 Add to Basket
Add to Wishlist
You'll be £28.00 closer to your next £10.00 credit when you purchase The North British Type 2 Bo-Bo Diesel-Electric Classes 21 & 29. What's this?
+£4.50 UK Delivery or free UK delivery if order is over £35
(click here for international delivery rates)

This book provides an in-depth history of the North British diesel-electric Type 2 locomotives which were constructed by the North British Locomotive Company in Glasgow during the late-1950s / early-1960s for use on the Eastern and Scottish Regions of British Railways.

"Despite efforts to improve their poor performance in traffic, by both engine refurbishment or complete replacement, these locomotives were all withdrawn from service by the end of 1971.

"They are all well produced and feature a blend of textual information about the locomotives, diagrammatic drawings, a lavish collection of photographs and tabulated data... As for a recommendation, if the classes covered are of interest to you then these are quality books filling a niche market and worth buying."

For the diesel historian and modeller, this is an extremely useful and informative study of a class that was sadly lost before the diesel preservation movement became established. Highly recommended.

It is a mine of information for those interested in these much maligned locos that spent the vast majority of their short lives in Scotland.

This weighty tome is a very detailed study of the technical aspects of these little-known engines, and takes a thorough look at their workings, careers (one by one) and subsequent withdrawal. Backed up by a wealth of photographs in both black & white and colour this book will clearly be respected as being the authoritative account of these locomotives, and completes the story of a type that on reflection should probably have never been built.

A detailed study to the millimeter on Classes 21 and 29.

Like the other books in the Locomotive Portfolio series, the book is a real encyclopedia of information about the Class 21s and 29s as none of this type of locomotive remains today in preservation.

The rather sorry story is well-told throughout, though, at times, it makes somewhat depressing reading. That said, it will be of great use to modellers and historians alike. Recommended.

A very interesting book about these short-lived locomotives. It has 170 photographs and a wealth of information about them, both class 21 and class 29 (which is a reconstruction of Class 21). All this gives it great value as an encyclopedia of these passenger locomotives and goods from which unfortunately none has survived.

Ordered by the British Transport Commission as part of the 1955 B.R. ‘Modernisation Plan’ from N.B.L in Glasgow, these diesel-electric, MAN engined, Type 2 locomotives proved far from successful. However, with twenty of the class being re-engined with Paxman units theirs is an interesting story and told eloquently in this excellent book. Photos of each of the fifty eight members of the class are coupled with detailed descriptions and, where applicable, additional photos showing their change of appearance as a class 29. This book comprehensively covers all aspects of this short lived class, including livery details, re-build information and detail differences, making this book a must for the railway modeller, or those, like me, interested in the early ‘pre-tops’ B.R. diesel era and, because of the class 29 association with the area, anyone interested in the West Highland Line. 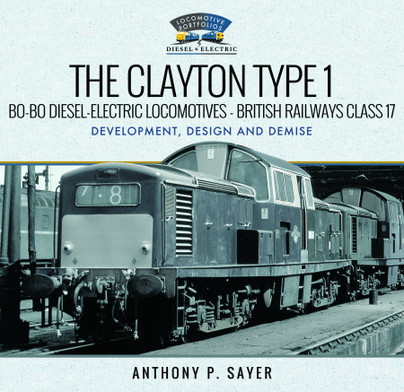 The ‘Claytons’ were originally conceived as the British Railways “standard” Type 1 diesel-electric locomotive, superseding other Type 1 classes delivered as part of the ‘Pilot Scheme’ fleet. The early classes suffered from poor driver visibility, and the plan from 1962 was for subsequent trip-freight and local yard shunting locomotives to be centre-cab machines with low bonnets to dramatically improve visibility. To this extent the Claytons were highly successful and popular with operating crews. However, the largely untested high-speed, flat Paxman engines proved to be highly problematical,…