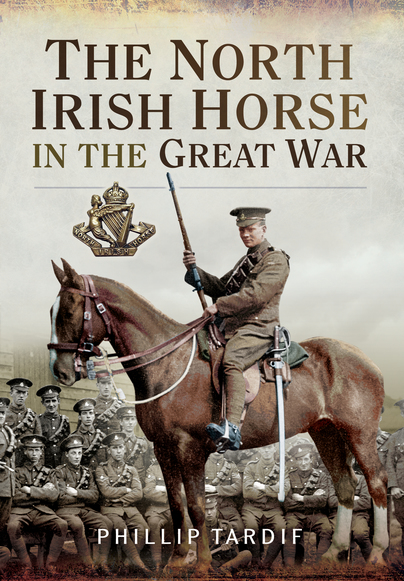 The North Irish Horse in the Great War (Hardback)

Add to Basket
Add to Wishlist
You'll be £20.00 closer to your next £10.00 credit when you purchase The North Irish Horse in the Great War. What's this?
+£4.50 UK Delivery or free UK delivery if order is over £35
(click here for international delivery rates)

I find this book an excellent read, clear, packed with detail, but always human and, when the mounts are horses rather than the later bicycles, full of horse care. In an account of troop movements we meet a man on a train pulling in to a French village, who is gladdened by the sight of cavalry washing their horses in the stream.

We meet the recruits, the volunteers, officers and their backgrounds. To begin with the men were farmers and farmers' sons, many bringing their own good Irish farm horses to the regimental depot in Antrim, and as they were reasonably prosperous their lives and education are well documented, such as a law career interrupted by the war. Consider one of the many to lie about his age, a stout lad of thirteen; and a pre-war enlistee Farrier Quartermaster Sergeant, who had gained his first medal in the Zulu War, fought before he'd been born according to his age claim. In 1915, a lad of seventeen claimed to be nineteen; six months later he applied for a commission and increased his age to twenty-two, and got it.

Consider the horses. The amount of horses depended upon for moving troops, moving supplies, moving artillery, moving civilians, you name it. Australian remounts which needed breaking. And consider the amount of times I was reading 'shot from under him' or 'the first time he saw explosions throw men and horses into the air' or 'gave chase to a fleeing Prussian officer and shot his mount dead, which had the effect of injuring the officer, whose papers detailing troop positions proved valuable'. In April 1915 a squadron sailed to France with 158 riding and draught horses. The 150 saddles were all numbered. Some time later, the horses were fat, it must be said, and the officers were playing polo.

We see what the men saw, such as the Royal Flying Corps, the pigsty shelters overnight, the peasants proving fruit and gratitude, the trail of destruction left after a retreating army. We get their opinions on the Prussians, Khulans, Canadians, other Irish, the Scottish Highland troops. By 1918, of course, the North Irish Horse Cyclists are seeing quite a different life, and the talk is of barbed wire, tanks and Lewis guns. But old conceits died hard: in December 1917 an officer commanding Whippet tanks chose to ride a horse; 'he had two horses shot under him that day'. Spanish Flu took some men. We finally see what happened to the men at the end of the war, including those who were disabled, those who re-enlisted; and how hard it was to know where people had been buried.

The riding, pack and draught horses were all given to other divisions as remounts, transport etc. when the regiment converted in February 1918, because 'cyclists didn't need one man to hold the horses when the others dismounted', and men with equine skills such as smiths and saddlers were transferred to where those were needed. We're not told if any of those horses were brought back home. If, indeed, any Irish horses survived.

The author notes that if a man had to be disciplined, he often does not identify that man, as it serves no purpose, and the man's family has to be considered. That aside, this is the most detailed and readable account of this area of the war which I have read.

Citations are presented as footnotes and placed at the end of each chapter for easy reference. Some basic maps are provided. Some illustrations, such as a photo from Belfast Evening Telegraph. A timeline at the end, and a list of all the casualties. References for your further reading.

Prefect book for any horse enthusiasts out there! The writing was engaging and interesting as was the subject matter.

The book is a history of an Irish regiment in action during a war now 100 years in the past. The author has done an incredible amount of research to bring the participants to life during a period of tremendous stress. The regiment was formed as a cavalry unit early in the 20th century and met as do reserve units do today. Meetings once or twice a month and an active duty session once every year or so. The activities were taken as a lark by the participants as attested to by their own words gathered from their descendants by the author. More drinking and fun and games interspersed with a bit of military training were the order of the day.
When war broke out between England and Germany the Irish Horse was activated and sent to France to be incorporated with the BEF (British Expeditionary Force). In spite of a background of conflict between England and Ireland regarding the question of Irish Home Rule the Regiment answered the call. Using the words of the participants the author follows the moods and feelings of the men in action. For example, at the opening of the fighting some of the soldiers came upon a wounded German soldier. In their own words they bandaged his wounds and since they had no way to transport him to their lines just left him to make his way back to his own lines. Later after years of fighting the soldiers take a group of German soldiers prisoners. Again, in their own words they couldn't get them to the rear, got bored with the situation and killed them.
The NIH fought in many of the major battles of the great war. They began with the retreat from Mons, went on to fight at the Somme, Ypres (several times) Passchendaele and the major actions in the last months of the war which defeated the enemy army. The book's strong point is definitely the presentation of the regiment's soldiers as real men tossed into a situation of horror facing death and crippling wounds and doing what must be done. There is an afterward which follows as many of the veterans as possible into their lives after the war including some of their participation in World War II.
I must admit to an interest in history as presented with the vehicle of the presence of those participating in it, and the current book does take that a step further with the addition of their actual words and reactions.