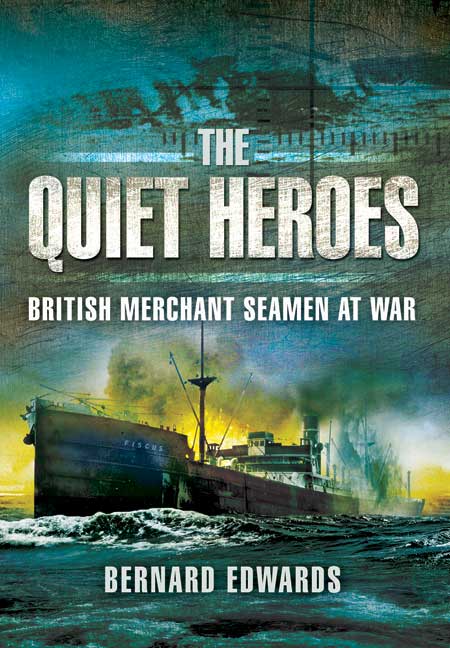 Click here for help on how to download our eBooks
Add to Basket
Add to Wishlist
You'll be £4.99 closer to your next £10.00 credit when you purchase The Quiet Heroes. What's this?
Need a currency converter? Check XE.com for live rates

The men of Britain's Merchant Navy, although unarmed civilians going about their lawful business were the first to be involved with the enemy in the Second World War. Less than nine hours after the declaration of war on 3 September 1939, the Donaldson liner Athenia was sunk without warning by a German U-boat off the west coast of Ireland. From that moment onwards, British merchant seamen were constantly in the front line in all quarters of the globe. For almost six years they faced, without flinching, their own private hell of torpedoes, bombs, shells and mines, all the while fending off their old arch-enemy, the sea. Sorely pressed, and often tired near to death, they kept open Britain's tenuous lifelines, bringing millions of tons of raw materials, food, oil, arms and ammunition, without which the country could not have survived. As always, their spirit was indomitable, their professionalism unchallenged. The price they paid for their bravery and dedication was horrendous: 2,246 ships lost, 29,180 men killed, and countless hundreds maimed and wounded. This book tells the story of just a few of these quiet heroes.

Captain Bernard Edwards spent 37 years at sea with the Merchant Navy commanding ships trading worldwide. On retirement he settled in South West Wales to pursue his second career as a Naval historian. His knowledge of the sea and ships has enabled him to write a series of internationally recognised works, the majority of which are in print with Pen & Sword.

This book is a collection of incidents which occurred during the Second World War. Bernard Edwards is the author of very many books about the war at sea and as usual he has written a very readable book. Merchant Seamen suffered very badly during the conflict and afterwards were forgoten by most people. At least the War memorial at Tower Hill records their names, I just wonder how many of the present population even know it's there.

Men who manned merchant ships, hose ho dies, and those who lived to see the peac, were all quiert heroes, dedicated and uncomplaining, This book is an excellent tribute to these unsung heroes, well written ad is highly recommended

Most people would think that the critically decisive moments of the Second Wold War were either the Battle of Britain, El Alamein or the Normandy Landings. In fact, as Churchill himself recognized, it was the U-Boat menace in the Atlantic that brought Britain closest to her knees.

One of the most disastrous wars of the man kind had quite few critical moments that could be easily enumerated, for example Battle of England, El Alamein, battle of Kursk and many others. However, the mariner and naval historian, Bernard Edwards, in his book 'The Quiet Heroes' pays tribute to those sailors and mariners who left defenceless in the face of an attack risked their lives to provide food and supplies to the fighting England. Edwards sheds light on this less known constant battle that took place on the waters surrounding the British Isles, between the new German invention, submarines U-Boats and merchant ships. In his gripping account the author stresses great courage of the merchant seamen sailing on the vessels full of supplies powerless and open to an attack of the merciless German U-Boats. The fear of death either in the fire of an explosion or in the freezing waters of the Atlantic would not stop those men from filling in their duty to the countrymen and their homeland. The book truly catches the spirit of glory and courage in the face of unavoidable death.

Living in constant fear of being torpedoed, struck by mines, strafed and bombed, during the Second World War the men of the Merchant Navy endured tortuous months at sea in order to keep Britain's vital supply lines to the outside world open. Stalked by tenacious U-boats, hounded by prowling aircraft, and forever battling the hostile ocean, it was the dedication and sacrifice of these men that allowed Britain to hang on in the dark days of 1940, and it was through their efforts that the materiel necessary for the final defeat of Germany in the West was stockpiled. Bernard Edwards' book captures brilliantly the brutal nature of this over-looked struggle, revealing the human side of what is often seen as a war of statistics. Presented in 23 chapters, Edwards examines various aspects of the conflict through the stories of the men and the ships in which they served. He reveals not only the evolution of the life or death struggle in the Atlantic, but also provides an insight into some of the less well-known theaters in which British merchant seaman risked their lives to ensure that their vital cargos got through. These individual and expertly rendered stories highlight these unsung heroes, the incredible struggles they endured and the lonely sacrifices they made, without which final victory would not have been possible.

From the author of numerous other naval history publications, and merchant mariner himself, comes The Quiet Heroes; a worthwhile tribute to the men whose contribution ultimately made victory in the Battle of the Atlantic. Living with the constant threat of being obliterated without warning by torpedo; knowing that the likelihood of surviving a plunge into the freezing Atlantic was minimal at best - if they were not killed by explosion or fire, that is - these men remained dedicated and courageous throughout this difficult and prolonged period of uncertainty and vulnerability. Granted, the success of the battle was the result of many fundamental contributors such as the mightiness of industrial America, the development of anti-submarine warfare, and the Ultra code-breaking; but nevertheless, none of this would have been achievable was in not for the extraordinary bravery and strength of the merchant mariners who manned their defenseless vessels. The courage and unwavering spirit of these men remains at the forefront of the book's redress - a moving depiction for any reader.

The Quiet Heroes is a beautifully apt title for a book which attempts to the highlight the valiant efforts of the British Merchant Seamen during World War II. It is an area often overlooked in favour of more famous events such as the Battle of Britain or the Normandy Landings, which were both seen as key to Allied victory. But Churchill himself recognized the very real threat of German U-Boats in the Atlantic, and in this print Bernard Edwards continues that recognition with what can easily be called 'a tribute' to men who he clearly feels never received the true credit they deserved for showing such dedication and bravery in the face of constant danger. Edwards makes no apologies even if his attempts to redress the balance could be considered over-empathized or romanticized as he reminisces on the conditions the seamen must have faced, enduring months on the cold, stormy seas whilst facing constant threat of attack or torpedoes without warning. As a merchant mariner himself it is perhaps understandable that there is even a hint of anger in the author's piece, anger at the way these unassuming civilian men were dropped into such a situation with nigh on no training, firepower or defence against the enemy's ammunition and sheer numbers. But it would be facetious to suggest that Edwards' own feelings deflect from the events at hand - we are directed analytically and factually through some of the ships' operations as they did indeed fight bravely to keep open Britain's vital trade lifelines despite being under constant fire, and whilst this is definitely a book for those of an 'Our Boys' persuasion, it is difficult not to empathize with the author by the conclusion and find yourself moved by the courage of the merchant seamen against all odds.