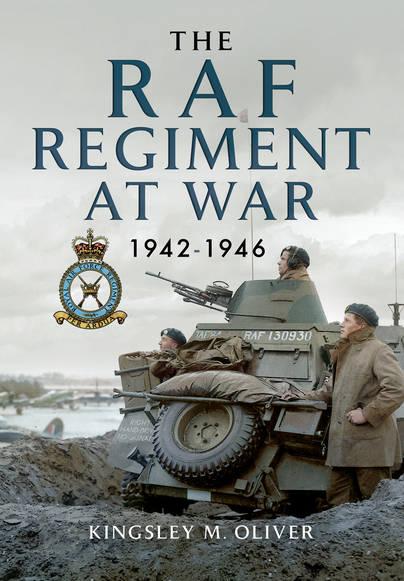 Click here for help on how to download our eBooks
Add to Basket
Add to Wishlist
You'll be £4.99 closer to your next £10.00 credit when you purchase The RAF Regiment at War 1942-1946. What's this?
Need a currency converter? Check XE.com for live rates

In 1940, the Germans' blitzkrieg tactics and the airborne threat changed the face of warfare. In particular the Royal Air Force quickly realised that, without secure bases and airfields, operational effectiveness was in jeopardy. It also became apparent that the Army was unlikely to be in a position to deploy troops in support of the RAF and, even if it could, serious doubts existed that the forces provided would be suitable.

To meet the clear requirement for a dedicated ground and low level air defence force, the Royal Air Force Regiment was formed on 1st of February 1942 as a Corps within the RAF.
From such uncertain beginnings in the midst of a world war, the RAF Regiment grew to become a highly professional fighting force of 50,000 officers and airmen in 240 antiaircraft, infantry and armoured car squadrons which served wherever the RAF operated and fought with distinction in every theatre of war.

Published to mark the 60th Anniversary of the Regiment's formation, The RAF Regiment At War 1942-946 records these achievements during the crucial early years. Fittingly it is dedicated to the memory of all those who served during this period and, in doing so, set the standard for their successors from then until the present day.