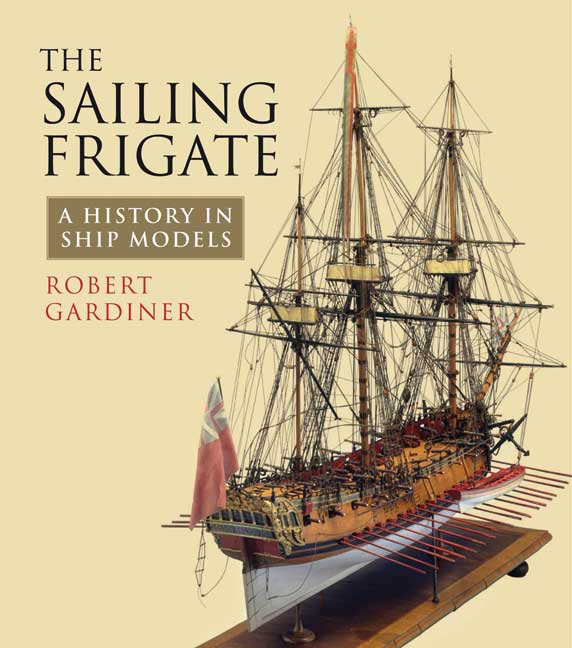 Click here for help on how to download our eBooks
Add to Basket
Add to Wishlist
You'll be £6.80 closer to your next £10.00 credit when you purchase The Sailing Frigate. What's this?
Need a currency converter? Check XE.com for live rates

This book was the first of a series which takes selections of the best models to tell the story of specific ship types – in this case, the evolution of the cruising ship under sail. Each volume reproduces a large number of model photos, all in full colour, and including many close-up and detail views. These are captioned in depth, but many are also annotated to focus attention on interesting or unusual features. Although pictorial in emphasis, the book weaves the pictures into an authoritative text, producing an unusual and attractive form of technical history.

While the book is of particular interest to ship modellers, all those with an interest in ship design and development will attracted to the in-depth analysis of this beautifully presented book, now in an affordable paperback format.

This is a very impressive book, and a very useful history of the development of the frigate, one of the most important warships of the age of sail.

In The Sailing Frigate, Robert draws extensively on the fabulous collections of the National Maritime Museum and everypage, except for just five, has one or more model photos, all in full colour with which to illustrate the evolution of the frigate from 1600 to 1855. There are many detailed photos, often of close-up sections of the models, all captioned with informative text.

As well as outlining the development of the basic hull design, Robert also look at the provision of ship's boats, sweeps and carronades, as well as the changing shape of both the stern galleries and the head.

To add further interest to the book, the historical and political situation which determined the direction of ship development is also dealt with in an authoritative manner.

This will make an important addition to your bookshelf. It is packed with informative text and photos which will help you to model all the fine details of your next project.

Robert Gardiner is justly renowned as the author of three classic books, 'The First Frigates: 9 & 12 pdr Frigates: 1748-1815' (1992); 'The Heavy Frigate: 18 pdr Frigates: 1778-1800' (1994), and 'Frigates of the Napoleonic Wars' (2000). Now he has taken advantage of developments in modern printing and publishing to produce a sumptuous guide to Frigate evolution as illustrated by surviving ship models in the National Maritime Museum collections (including several not on display today). All of the many photographs are in colour, which would have made this book prohibitively expensive not so long ago, and it is this mass of clear colour illustrations that really make this book such a joy to read. His older books are still excellent for reference, but there is no comparison between the impact and quality of the colour photos in this book and those old black and white photos. Moreover he has taken the opportunity to expand his coverage to include the post-war 'final generation' of sailing frigates, notably the work of Sepping and Symonds. Truly excellent.
5 Stars!

In this new edition of the book, published for the first time in softback, Robert Gardiner, utilises photographs of many of the best examples of ship models to tell the story of the evolution of the Sailing Frigate. The superb full colour photographs, including many close-up and detailed views which are captioned in depth to focus attention on the construction, armament, deck fittings and appearance, together with any interesting or unusual features of the actual shops they portray. Although pictorial in emphasis, the book weaves the pictures into an authoritative text, producing an attractive and unique form of technical history.

While the book is of particular interest to ship modellers, all those with an interest in ship design and development in the 17th to 19th Centuries will be attracted to the in-depth analysis of this beautifully presented book.

... In full colour throughout, excellently written as one would expect from this well-known author and illustrated by superb large photos from the NMM's and the USNA museum's fabulous collections as it is, this is visually a beautiful book as well as one offering a gold mine of information to modellers, to naval historians and to anyone interested in the cruising ships of the sailing navy of the 17th-19th Centuries.

THE Military Revolution is a cliché for the changes in military and naval technology that took place between the sixteenth and the eighteenth centuries. The phrase suggests sudden and rapid changes, in which new technologies swept older technologies aside. The reality, as Robert Gardiner shows in this beautifully illustrated book, was a process of gradual and incremental improvements to existing technologies.

Using the UK National Maritime Museum’s collection of ship models, Gardiner shows how the fast sailing galley of the seventeenth-century Dunkirk privateers became the sleek sailing vessel that enforced the blockade of the French coasts through the revolutionary and the Napoleonic wars. Changes to a ship’s design might be minor, placing gangways between the forecastle and the quarterdeck, for instance, or as radical as placing copper plates onto the hull below the waterline. Both, however, gave English frigates to stay at sea for longer and so enabled the Royal Navy to maintain a continuous blockade of the continental coasts such as had not previously been seen.

Gardiner clearly explains such changes in simple language and uses the ship models to illustrate how the changes were put into effect. Anyone wishing to see how naval architecture changed during the age of sail and how those changes impacted on naval tactics could not do better than to start with this guide to the design of ships through that era.

A comprehensive description of the frigate's development made all the more lucid by the well-chosen illustrations.

Robert Gardiner's book , 'The Sailing Frigate: A History in Ship Models', illustrates why he is so highly-regarded.
Using contemporary models proves an excellent method of illustrating changes in ship design and construction. Differences between the Sheerness model of 1660 and the Warrior of 1860 are obvious. The strength of Gardiner's book is that it demonstrates the evolutionary process yielding those differences, and the effects of technological change on ship appearance over the two centuries.
For those interested in warships of the sailing era, [this] is a book worth acquiring. It offers and outstanding introduction to the history of that era's most storied sailing warship.

Although the book is a general history, the author manages the mean feat of packing an astonishing amount of detailed information into it... He also makes extensive use of detail photographs with very precise captions to reveal even more information, a technique that educates the reader's eye. It is an important contribution that will be valuable both to specialists and general readers alike.

An extensively researched book full of insight and a wealth of detail. It will appeal to anyone with an interest in the era of sail.

Another fine work from one of the world's leading experts on such matters. Gardiner offers an exquisite book, which tells the history of the sailing frigate from private yacht to its final form, through over 100 colour photographs - some in closeup - with notes, captions and an authoritative text.

This is the first in a series of books to use the models at the National Maritime Museum to chart the complex and sometimes wayward search for the most effective frigate. This edition focuses on the evolution of the cruising ship under sail. It would be a valuable reference source for any modeller undertaking the construction of a sailing frigate, as it contains a vast wealth of general and close up pictures of models at the museum. These pictures build to give an almost 3-D view of the craft. The author also explains many of the unusual terms, like pink stern, applied to these frigates. There is also a wealth of detail on planking both hulls and decks together with some information on armaments and rigging.

A history in Ship Models. Illustrated from the Collections of the National Maritime Museum" by Robert Gardiner. A beautiful book, an excellent history.

Very informative and comprehensively illustrated sections on various aspects of frigate design and development are also found here…
In full colour throughout, excellently written as one would expect and illustrated by superb large photos of models from the NMM’s fabulous collection as it is, this is visually a beautiful book as well as one offering a goldmine of information to modelers, to naval historians and to anyone interested in the cruising ships of the sailing navy of the 17th-19th Centuries. It is the first volume of a series planned by Robert Gardiner’s own Seaforth Publishing which has the aim of telling the story of a number of specific sailing warship types through the unexcelled contemporary model collection of the NMM, so we can look forward with eager anticipation to future publications in the series.

Full colour photographs of the selected models provides an enormous amount of visual detail for the historian, the model maker and all those interested in the design and development of sailing ships.
The author has taken the sailing frigate as the subject for this first book and the illustration is outstanding. The frigate was a vital type of warship in the Georgian Royal Navy. It provided reconnaissance, it supported the line of battle, and it was used for a diverse range of duties around the world, often a single frigate operation without support or direction on the other side of the world. Sailing on the eve of war, or on the dawn of a new truce, only to arrive in its operating area as a new war had started, or and older war ended.
The selected models depict the range and evolution of the frigate in Royal Navy service. Extended captions and introductory text is well-written and highlights features of each model. The beautiful illustration can be appreciated as art and the highest production standards have been achieved. This book should become very popular with all those who have an interest in ships, in design, and in technology.