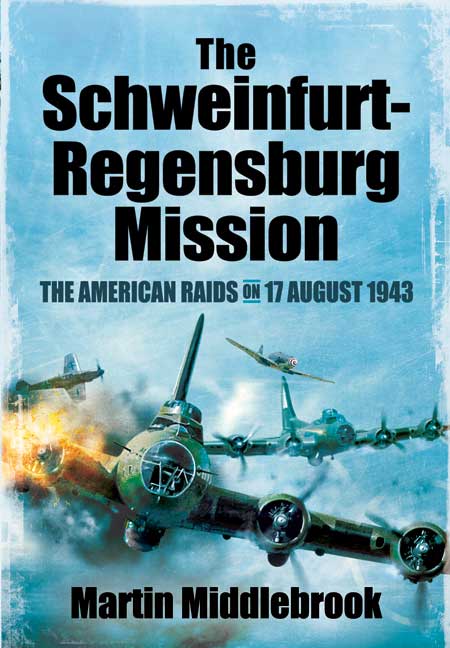 Click here for help on how to download our eBooks
Add to Basket
Add to Wishlist
You'll be £4.99 closer to your next £10.00 credit when you purchase The Schweinfurt-Regensburg Mission. What's this?
Need a currency converter? Check XE.com for live rates

On 17 August 1943, the entire strength of the American heavy bomber forces in England set out to raid two major industrial complexes deep in southern Germany, the vast Messerschmitt aircraft factory and the vital KGF ballbearing plant. For American commanders it was the culmination of years of planning and hope, the day when their self-defending formations of the famous Flying Fortress could at last perform their true role and reach out by daylight to strike at targets in the deepest corners of industrial Germany. The day ended in disaster for the Americans. Thanks to the courage of the aircrews the bombers won through to the targets and caused heavy damage, but sixty were shot down and the hopes of the American commanders were shattered. Historically, it was probably the most important day for the American air forces during the Second World War.

While researching this catastrophic raid the Author interviewed hundreds of the airmen involved, German defenders, ‘slave workers’ and eye witnesses. This took him twice to both the USA and Germany.

The result is a mass of fresh, previously unused material with which the author finally provides the full story of this famous day’s operations. Not only is the American side described in far greater depth than before but the previously vague German side of the story – both the Luftwaffe action and the civilian experiences in Schweinfurt and Regensburg, are now presented clearly and in detail for the first time. The important question of why the RAF did not support the American effort and follow up the raid on Schweinfurt as planned is also fully covered.

The author has produced a well reasoned and comprehensively research analysis if this classic USAAF raid and the challenged involved in co-ordinating the RAF and USAAF bombing campaign in its early stages. The text is supported by illustrations and a black and white plate section. By combining research and interviews with US and German veterans, the author has introduced some valuable new material and a fresh perspective. He has also addressed the important question of why the RAD did not support and follow up the raid as originally planned. A very readable analysis that holds the reader’s attention.