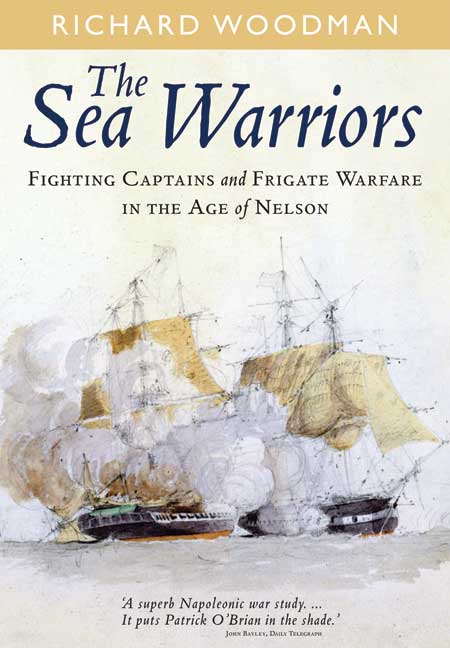 Fighting Captains and Frigate Warfare in the Age of Nelson

Add to Basket
Add to Wishlist
You'll be £16.99 closer to your next £10.00 credit when you purchase The Sea Warriors. What's this?
+£4.50 UK Delivery or free UK delivery if order is over £35
(click here for international delivery rates)

Order within the next 7 hours, 4 minutes to get your order processed the next working day!

The Sea Warriors is the true story of the great frigate captains of the Nelsonic Royal Navy who spent long and arduous years away from their homes fighting for king and country, to win and hold control of the seas.

Richard Woodman skilfully dissects the events of the war years, focussing on the cruiser war, that war between opposing frigates which entailed the blockade of enemy ports, the interception of enemy trade and the protection of Britain's merchant ships. The whole magnificent sweep of this great struggle is set against its political background of the Napoleonic wars and the sea war with America.

With this narrative come an extraordinary array of young, daring and hugely skilled frigate captains whose ability to grasp the chances offered by war made them household names in this savage age. Some, like Warren, Pellew, Cochrane and Collingwood, are still renowned; others are here rescued from under the shadow of Nelson as the author recounts their brave and brilliant exploits.

As well as the thrilling accounts of sea battles and single-ship actions, the author describes the darker side to life at sea – the constant danger and harsh discipline, the wearying monotony of sea-keeping, the scourges of disease and the occasional outbreaks of mutiny. All this is brought together in a stirring narrative by one of the country's finest naval writers.

An exciting read... The decision to include the War of 1812 is an excellent one, giving a more complete picture of the experiences of the frigates during the period.

By focusing on the smaller vessels Woodman frees himself from the shadows of political considerations. His captains were those favoured few who were entrusted with private cruises, free from the ponderous constraints of fleet manoeuvres. The book is free from the stiffness of cabinet rooms in London, and instead is suffused with the tang of salt water and the acrid bite of gunsmoke.
As a master mariner, Woodman can and does bring alive to the reader the importance of sea conditions, prevailing winds, proximity of shore and tidal conditions. He also brings alive the importance of the personality of the captain.

A very 'good read' both for those who habitually read naval fiction and those interested in the ships and naval history of the period.