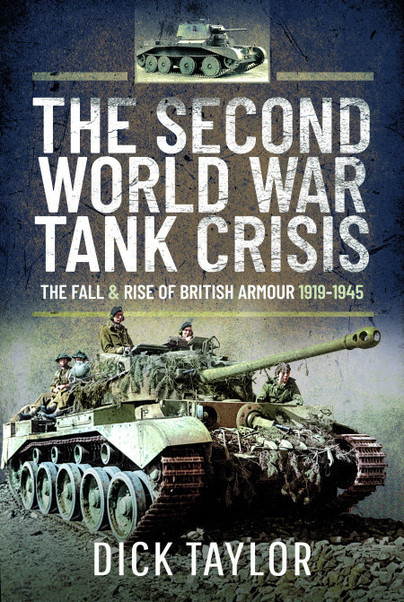 Click here for help on how to download our eBooks
Add to Basket
Add to Wishlist
You'll be £4.99 closer to your next £10.00 credit when you purchase The Second World War Tank Crisis. What's this?
Need a currency converter? Check XE.com for live rates

This book about British tanks is a good addition to any tank lover's bookshelf.

An interesting book for anyone interested in the history of tanks, not just WW2.

I love a book where you’re going to learn something new, and from this book, I learnt a whole lot of new knowledge. I mean I never knew Britain had not done very well at building tanks, it had crossed my mind how we didn’t seem to do well in the ‘tank stakes’, but I hadn’t thought much more about it. But it turns out at the beginning we were doing very well, but things have slowly gone down ever since, a bit like the British car industry. This book is very well written, and it’s been written for the ordinary reader, it looks at design, money, influence and development both by machine and politically. The author Dick Taylor has written such a good and balanced book that would please those that know all the technical details to someone like me who is still learning about the life of tanks. I very much enjoyed the detail and thoughts of Taylor, who clearly knows what he talks about. The book was so enjoyable it made me want to read a book similar to this that looks at both the development of tanks, planes and ships and to compare the difference between the three in the 20th century. A great book to read and recommend.

The book strikes an excellent balance between technical detail (such as the complexities of deep welding), jargon and wider principles while maintain readability throughout. The author, who is also the official historian of the Royal Armoured Corps wonderfully combines abundant expertise, the ability to explain complicated things in laymen’s terms and clear, engaging prose.

An interesting and informative book that analyses the big picture concerning tank development and tactics before and during WW2. It rightly describes the later emergence of better quality British tanks but I did not quite get the sense of the American tanks (Sherman etc) being low cost high volume but therefore ‘disposable’ whilst filling the gap until better British tanks became available. Perhaps that is one of the myths that the book sought to deal with. Generally though an enjoyable read.

Dick Taylor started his service in the British army at the tender age of sixteen as a Junior Trooper at the Junior Leaders Regiment Royal Armoured Corps in Bovington. After completing training he served with 3RTR and 2RTR. As well as being a tank commander, he was a specialist in tank gunnery. He was commissioned as a captain in 2000 into 1RTRand left the regular army as a lieutenant colonel in 2013, although he has since been mobilized for operational service three times for tours overseas. During his long career he completed fifteen operational deployments to various hot spots including three tours of Afghanistan, two to Iraq, as well as Northern Ireland, Bosnia, Kosovo, Sierra Leone and South Sudan. He remains in the Army Reserve. He is the official historian of the Royal Armoured Corps, has an avid interest in modern and military history and writes military history books for a hobby.