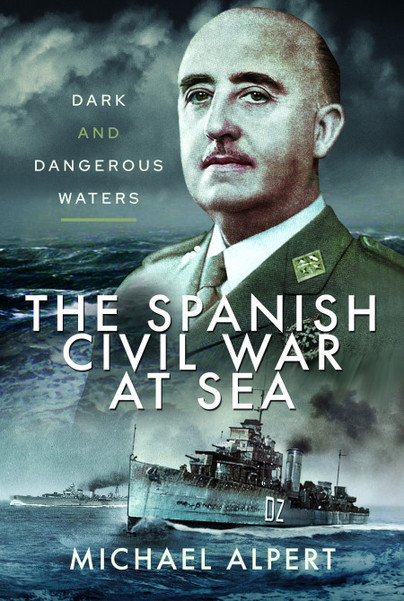 Click here for help on how to download our eBooks
Add to Basket
Add to Wishlist
You'll be £4.99 closer to your next £10.00 credit when you purchase The Spanish Civil War at Sea. What's this?
Need a currency converter? Check XE.com for live rates

The Spanish Civil War of 1936-1939 underlined the importance of the sea as the supply route to both General Franco's insurgents and the Spanish Republic. There were attempted blockades by Franco as well as attacks by his Italian and German allies against legitimate neutral, largely British, merchant shipping bound for Spanish Republican ports and challenges to the Royal Navy, which was obliged to maintain a heavy presence in the area. The conflict provoked splits in British public opinion. Events at sea both created and reflected the international tensions of the latter 1930s, when the policy of appeasement of Germany and Italy dissuaded Britain from taking action against those countries’ activities in Spain, except to participate in a largely ineffective naval patrol to try to prevent the supply of war material to both sides. The book is based on original documentary sources in both Britain and Spain and is intended for the general reader as well as students and academics interested in the history of the 1930s, in naval matters and in the Spanish Civil War.

"...an excellent treatment of the largest sea war between the world wars."

With the sub-title: Dark and Dangerous Waters the book is based on original documentary sources in both Britain and Spain and is intended for the general reader as well as students and academics interested in the history of the 1930s, in naval matters and in the Spanish Civil War.

'The book is hugely informative, straightforwardly written, often enthralling. It is an essential contribution to Civil War literature and a ‘must read’ for those interested in the Spanish war, in naval warfare, or even in British diplomacy at the time.’

"A very valuable contribution to the record of European naval history."

"Highly recommended to those who wish to learn more about this civil war."

The Spanish Civil War at Sea is an important book, providing as it does a useful account of what happened off the coast of Spain. It was often a story of relatively small-scale actions involving individual Insurgent and Republican ships, Royal Navy, German, and Italian warships, and numerous merchant ships. Michael Alpert supplies a brisk, detailed history of events between 1936 and 1939.

"The book is worth reading merely as an account of a neglected aspect of the Spanish Civil War."

Alpert uses just the right amount of primary sources, enough to make it interesting and engaging, but not too much so it distracts. I like the book a lot and I would highly recommend it to anyone who wants to know more about the Spanish civil war, but also who might want to see the politics of the 1930s Europe from a different perspective.