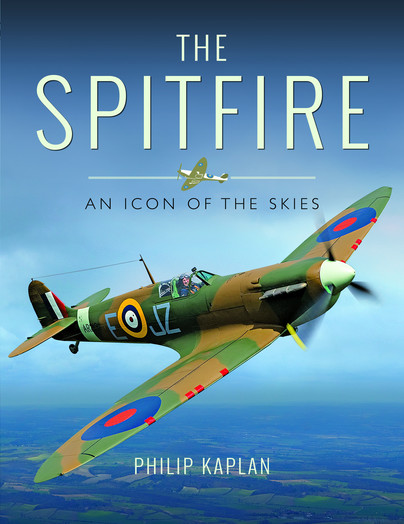 An Icon of the Skies

As recommended by the Daily Mail in their Christmas 2017 feature: Picture perfect – What better gift than a feast for the eyes? The best illustrated books to buy this Christmas

You'll be £30.00 closer to your next £10.00 credit when you purchase The Spitfire. What's this?
+£4.50 UK Delivery or free UK delivery if order is over £35
(click here for international delivery rates)

The magnificent Vickers Supermarine Spitfire, together with its able partner the Hawker Hurricane, saved Britain from Nazi invasion in the summer of 1940 and irrevocably changed the course of the Second World War. This new book from Philip Kaplan celebrates one of history's most important weapons in a glorious new light. A British national icon, the Spitfire is the best-known symbol of the war years for generations of Britons. From the deep, haunting growl of its Rolls-Royce engine, to the elegant style of its elliptical wing, it is perhaps the most famous and revered combat aeroplane ever built.

Kaplan investigates just what it is that fuels the Spitfire's compelling mystique. During wartime, it held an unrivalled reputation amongst Allied and Axis airmen. Today, it continues to hold aviation enthusiasts in thrall. Kaplan highlights the immeasurable contributions of Spitfire designers Reginald J. Mitchell and Joseph Smith, test pilots Jeffrey Quill, Mutt Summers and Alex Henshaw, and ace Spitfire pilots including Al Deere, Sailor Malan and Pierre Clostermann. All added to the legend of this lovely, but deadly, little fighter.

The origin and evolution of the plane are tracked, and the story of the marvellous Merlin engine that powered so many Spitfires through those challenging war years and beyond is brought to life. Kaplan considers the phenomenon of the burgeoning warbird movement, a worldwide effort to restore, preserve and display scores of Spitfires and many other military aircraft types for hundreds of thousands of air show visitors the world over.

There are only a few airworthy Mark I Spitfires today and this book centres round the Mk Ia AR213, whose total restoration to flying status was completed in 2008. Much of its colourful background is described, as is the experience of flying it, in the words of both Tony Bianchi and Jonathan Whaley, who have flown it for many years and, arguably, know it better than anyone.

In this, the eighth decade of Mitchell's brilliant fighter, Spitfire: An Icon of the Skies is dedicated to the craftsmen and women who built it.

A few months ago I was at the RAF Museum in Lincolnshire with lots of other sad middle-aged men, and as we turned a corner there was a splendid Spitfire.
And all those men simply sighed with pleasure. ‘Will it fly?’ we asked. Not today, said the guide, and I thought some of the men were going to cry. This glorious volume speaks of ‘the deep, haunting growl of its Rolls-Royce engine’ and ‘the elegant style of its elliptical wing’, and we are instantly lost in the imaginary dogfights of our childhoods.
Kaplan writes with such wide-eyed enthusiasm you begin to fear for his health. Be warned: his book contains more photographs of Spitfires than is entirely decent.

The volume can be considered a ‘Potted History’ of the Spitfire and its military and civilian service, with particular emphasis being placed on the restoration of AR213. On that basis it will probably appeal to Spitfire aficionados in particular and to aviation and war-bird enthusiasts in general. Aviation historians may find it worthy of their perusal, while ‘generalist’ military historians may also find it of interest. Pilots and ‘Aviation buffs’ of all persuasions may also find it worth a look. Aeromodellers specifically interested in the Spitfire (especially the early marks as exemplified by AR213) are also likely to find the colour images useful.

★★★★ The Supermarine Spitfire has an endless glamour due to the incommensurable beauty and an outstanding historical combat record. For this reason, Pen & Sword publisher dedicated this beautiful book to a true legend of aviation.

Author Kaplan traces in a dynamic and winning style not only the aeroplane in itself, but all the tesserae of a wide mosaic. These include the portraits of Reginald J. Mitchell, the history of Supermarine and RAF plus many other interesting aspects that put the incredible fighter in the correct perspective.

Another crucial theme of the book is the painstaking and perfect restore project of the Mk. Ia serial AR213, a truly teamwork effort (headed by “master of restore” Tony Bianchi) that produced one of the more genuine Spitfire.
Other interesting points of the text are the test pilots notes by Jeffrey Quill, Alex Henshaw, Ray Hannah and many others that make the reader understand the deep differences among the many Marks and give a wonderful taste of flight. Strictly recommended.

Possibly the most iconic of all of the WW2 fighter planes, this is an amazing tribute to the people who designed, built and flew it - a comprehensive history of one of the most beautiful aircraft ever manufactured.

This book is almost equally divided between text and photographs. The photographs are outstanding and most are in stunning full colour – Most Highly Recommended.