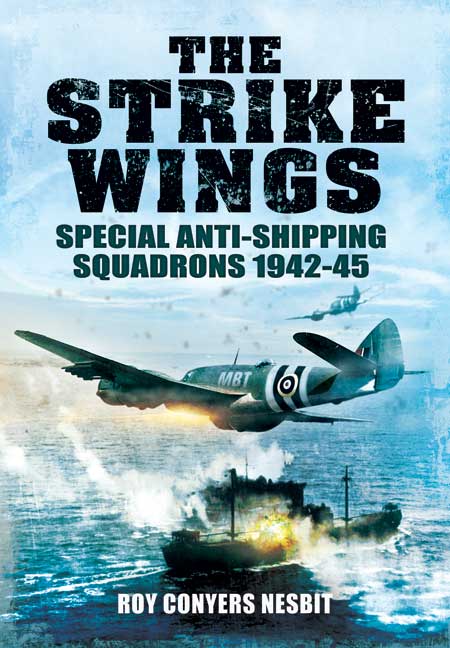 Click here for help on how to download our eBooks
Add to Basket
Add to Wishlist
You'll be £4.99 closer to your next £10.00 credit when you purchase The Strike Wings. What's this?
Need a currency converter? Check XE.com for live rates

In November 1942 the RAF formed special Strike Wings to attack the heavily defended and seemingly invulnerable convoys that brought Germany’s vital supplies of iron ore from Scandinavia down the coast of Europe to feed its war machine. The outcome was a series sea/air battles at close quarters, fought with increasing ferocity until the last days of the war. The Germans tried everything against the Beaufighters and Mosquitos of the Strike Wings – fighters, intense flak, parachute mines and even flame-throwers – and the casualties were appallingly heavy on both sides.

In this classic account of one of the neglected yet crucial theatres of the air war Roy Nesbit, himself a survivor of strike aircraft of Coastal Command, describes these complex battles from British and German records, assisted by first-hand accounts from some of the brave airmen who took part. He also analyzes the effects of the tactics employed on the German war economy, with some startling conclusions. The result is a fascinating, clearly written and vivid history of events that were little publicized during the war for reasons of security. rn His book includes detailed diagrams of some of the key attacks and features some astonishing photographs taken in action.

Coastal Command has never received the attention which has been lavished on the more famous branches of the Royal Air Force, and so the existence of the Strike Wings, formed in November 1942 to attack the heavily defended convoys carrying iron ore from Scandinavia to Germany, may be unknown to all but a few. In taking on these formidable targets, the Mosquito and Beaufighter squadrons suffered losses which were every bit as horrendous as those of Bomber Command, yet Roy Conyers Nesbit, himself a veteran of the Strike Wings, reveals that these anti-shipping sorties had a far more damaging effect on the German economy, sinking so many merchantmen that Hitler even considered stopping them altogether and relying on alternative means of supply. This is a superb book which not only explores the formation of the Strike Wings, the numerous sorties they carried out, and the weapons and tactics which they used, but it also sheds light on a vital yet much neglected chapter of the Second World War.

In this account of one of the least known yet crucial theatres of the air war the author, a survivor of Coastal Command strike aircraft, describes these complex battles using British and German records and first-hand accounts from some of the aircrews that took part. He also analyzes the effects of the tactics employed on the German war economy, with some startling conclusions. The result is a fascinating, clearly written and vivid history of events that were little publicized during the war for reasons of security. The book includes detailed diagrams of some of the key attacks and features some astonishing photographs which showed the ferocity and intensity of attacking German shipping at wave-top height. A brilliant read on what until now, was a relatively little-known aspect of World War Two RAF operations.