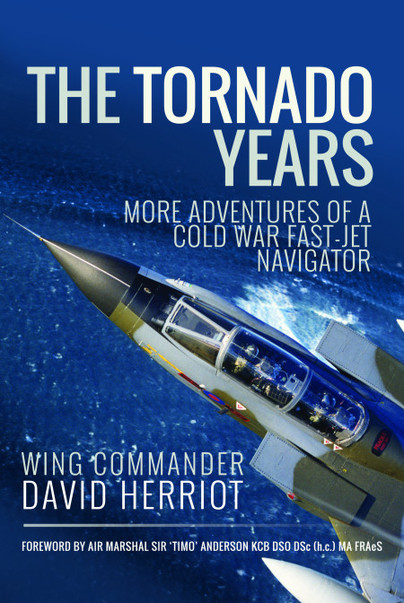 Click here for help on how to download our eBooks
Add to Basket
Add to Wishlist
You'll be £4.99 closer to your next £10.00 credit when you purchase The Tornado Years. What's this?
Need a currency converter? Check XE.com for live rates

Following the success of The Adventures of a Cold War Fast-Jet Navigator: The Buccaneer Years, which won the Aviation Enthusiasts’ Book Club’s coveted ‘Book of the Year’ award in 2018, Wing Commander David Herriot now explores that part of his RAF service which was intimately linked to the Panavia Tornado.

Whilst The Buccaneer Years introduced the reader to the life of an exuberant and boisterous young officer working hard to make his mark on four front-line fast-jet squadrons in both Germany and the United Kingdom, this book ushers in a much more sober and responsible officer. Qualified as a weapons instructor, and acknowledged as a skilled tactician and weapons expert, Herriot soon rose to the top on his first tour on Tornado. Subsequent promotions in rank found him with responsibility for all aspects of weapon delivery, and the formulation of tactics, for the four Tornado squadrons based at RAF Brüggen in Germany.

Later, in Whitehall, his career changed to that of a Ministry of Defence staff officer, assigned with the development of the weapons requirements for all air-to-surface delivery platforms in the RAF, but particularly Tornado. There followed a wartime deployment as the ‘Boss’ of an RAF support unit in Italy, for a squadron of Jaguars deployed on NATO operations in Kosovo, before his next appointment took him to the RAF College where he was, as the commanding officer of Cadet Wing, responsible for the training and guidance of the future officer corps of the RAF.

In the twilight of his career, and now acknowledged as ‘the man to give an operational project to’, he was tasked by the Air Force Board with analysing, defining and creating an ‘Air Warfare Training’ through-life learning package for all the officers and airmen/women of the RAF.

This is another epic adventure for the military aviation enthusiast, particularly those with affection for the Panavia Tornado. It is one that provides a rare insight into the ‘behind the scenes’ workings of a number of air force departments that are not often exposed, quite so candidly, in an unclassified document. Herriot’s open and easy style has been commended highly previously. He does not let his readers down with this one. This is a story well worth reading.


"The book is an enjoyable read, with readers quickly drawn into the fast pace of squadron life and the thrill of flying the Tornado at low level."

Sequel to his widely-acclaimed “The Adventures of a Cold War Fast-Jet Navigator: The Buccaneer Years”, award-winning author David Herriot brings us into the back seat of these remarkable British aircraft and provides insights unavailable until now. More than just an aviation book, Herriot is a skilled literary narrator, and his writing makes this short book a true gem.

The author began recounting his fast-jet Cold War career with “The Buccaneer Years” and this new book is another excellent instalment that will be eagerly read by professionals and enthusiasts. In this stage of his career as an air navigator in the RAF, he has transitioned from the Buccs to the multi-role Tornado and once more supports his text with two fine full colour photo-plate sections. – Most Highly Recommended.

If you’ve read about the author’s earlier years in the Royal Air Force, Adventures of a Cold War Fast-Jet Navigator: The Buccaneer Years, then you’ll want to read this follow-on book. It’s as interesting, entertaining, and informative as his first book, and I enjoyed it immensely. You can buy it as as a stand-alone volume, and you’ll have a wonderful insight into Tornado GR1 flying and life in the RAF outside the cockpit. Well done the author.

A belated review of a title I read last month when my signed copy arrived.

Following on from the excellent The Buccaneer Years I was looking forward to this book. It didn't disappoint.

After a recap of his career from joining the RAF on Buccaneers, the author takes us onto the next stage of his service.

After a tour in Whitehall on the considerable task of updating out of date weapons manuals, the author returns to the air.

This is via the multinational TTTE (with a real multinational spirit of cooperation) and the TWCU to the burgeoning Tornado force as it reaches its ultimate size.

The conversion from the Buccaneer to the all new Tornado makes for interesting reading. The quantum leap in terms of TFR, navigation and weapons systems as well as performance was significant.

Amusingly part of the author's return to flying also involves having to get his swimming certificate again.

Next we move to RAFG as the Tornado force builds up to its peak strength of 8 squadrons during the Cold War. With a mixture of new and experienced aircrew, the work hard/play hard ethos in the previous book is maintained.

Taking in the nuclear deterrent role, this chapter also covers the ever present TACEVALs and Red Flag participation as well as training in Canada, Italy and Cyprus.
Along the way the author also becomes a TACEVAL evaluator and weapons leader on the Tornado.

After coordinating the initial training for the response to the invasion of Kuwait, the author's career then takes a drastic turn.

On the verge of seeing action he is transferred to a staff post at the MOD.

This and the remaining chapters are no less interesting, taking in Staff College, Boscombe Down, weapons procurement, detachment commander in Italy during the 1997 Kosovo conflict and initial officer training at Cranwell to a deserved retirement after 38 years service.

As with the previous volume, this one contains many amusing stories and characters as well as an insight into the equally important planning and training roles. The spirit and camaraderie of the RAF shines throughout.

If any criticism could be levelled at David Herriot’s debut memoir, “The Buccaneer Years”, it might have been the impression it gave that everything in the 1970s Royal Air Force was washed down with lashings and lashings of stuff a lot stronger than ginger beer. With the author now also contemplating bars of the shoulder-mounted variety, “The Tornado Years” is perhaps a more sober (both philosophically and socially) account of the latter period of his career and is a tale told once more with much humour but also with humility and reflection. At times deeply personal, “The Tornado Years” gives an inkling not only to the stresses and strains of the fast jet cockpit but also those that military life can place on the families of those who serve.

Like all good things, a flying career must come to and end but the later chapters covering the author’s “mahogany bomber” days serve as no less revealing or entertaining glimpses of the complexities of managing offensive air operations, procuring defence equipment or training the servicemen and women of the future. All in all, “The Tornado Years” is a revealing read and as engaging a tale as the man who tells it.

I like this title, it’s well written, authoritative and has plenty of behind-the-scenes insight into Tornado tactics throughout the service life of the type that has, sadly been recently retired from Royal Air Force duties. In addition, it builds on the author’s earlier work: The Adventures of a Cold War Fast-Jet Navigator: The Buccaneer Years.

Following on from the excellent The Buccaneer Years I was looking forward to this book. It didn't disappoint... As with the previous volume, this one contains many amusing stories and characters as well as an insight into the equally important planning and training roles. The spirit and camaraderie of the RAF shines throughout.

If you've read Adventures of a Cold War Fast-Jet Navigator: The Buccaneer Years then this book is for you. But if you haven't read the prequel, then the author has very helpfully included a summary of his 'career to date' in the first chapter of this, the sequel. The Tornado Years: More Adventures of a Cold War Fast-Jet Navigator covers the latter half of David Herriot's career in the RAF with 2 tours on the Tornado and a number of subsequent command and staff tours, the latter mainly in MOD in London. He writes in the most easiest of styles allowing his reader ample opportunity to get to know him and enjoy, almost as if he and his reader were linked at the hip, the life he lead in those almost 20 years of the latter half of hiis career. Both his memoirs are peppered with humorous tales (some laugh out loud hilarious) that one often finds hard to believe could have happened in this now PC-moderated life that we lead in the 21st century. These were different days, however, and David Herriot lived each and every one to the full. I cannot strongly recommend this book enough. If you are into aviation - it's a YES! If you are into military aviation - it's a YES! If you are into military lifestyles - it's a YES! If you like a jolly good laugh - it's a YES!

This is a follow on book about the authors later years in the RAF flying the amazing tornado.
It had me gripped from the start and takes the reader on a journey through the conversion to tornados and what it was like to fly from a cockpit perspective.
Anyone who enjoys a real flying book will kot be disappointed with this rare gem.

Wing Commander DAVID HERRIOT served in the RAF for thirty-eight years as a navigator and qualified weapons instructor both on the Buccaneer S2 and the Tornado GR1. Born and brought up in Glasgow, he was a keen amateur genealogist who researched his family history back to the 17th Century in and around Edinburgh and the Scottish Borders. Wing Commander Herriot passed away in 2020.