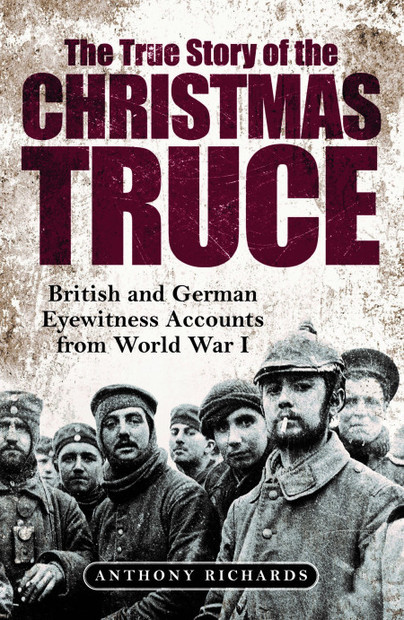 The True Story of the Christmas Truce (Kindle)

You'll be £4.99 closer to your next £10.00 credit when you purchase The True Story of the Christmas Truce. What's this?
Need a currency converter? Check XE.com for live rates

"Richards does a fine job of weaving analysis into the interesting firsthand recollections. His use of German sources also enhances the historical significance of the book."

Thanks to its creditable and carefully selected collection of accounts, even owners of multiple books on the subject will find in it a useful springboard for further research.

Richards book has added yet another important facet to this special story, and has further separated fact from fiction in terms of the myth that has built up over the years.  As he states, ‘while the Some and Ypres will always be associated with the massive casualty figures suffered by both sides as, as a result of the fighting in those sectors, the Christmas Truce is unique for being remembered as a moment of peace within the wider conflict”.

This book was amazing. It had me hooked from the very start. It is truly awe inspiring book. I just loved the authors style of writing keeping the book light and following. Without packing it tight with facts that make it heavy reading. I just breezed on through it while learning so much. You could tell from the start that it was well researched. It was fantastic reading the eyewitness accounts of the truces and the fraternization between enemies on minute, friends the next then vice versa . I really enjoyed learning about how the officers and Higher up dealt with this. It was so factual and well layed out into nice easy chapters. I especially loved reading about one soldiers account of the truce from the Manchester regiment. Which is my home town, so I felt even more connected with the book.
I can't wait to read more from this author as he is one to look out for.
So much praise goes out to the author and publishing team for bringing a truly stunning accounts of the truces during the first World War in such a fascinating style.

As featured in: '1914 Trice: Tommies were our brothers'

These events that took place during the early portion of WWI helps to replenish your faith in humanity, which while never, repeated makes for an interesting historical event. I do not believe that any of those that were involved in these events are still alive, and so these words provided by the people make for a unique reference and insight into the front line on the Western front during Christmas 1914.

In his book, historian Anthony Richards has brought together hundreds of first-hand reminiscences from those who were there – including previously unpublished German accounts – to cast fresh light on this extraordinary episode.

The Christmas Truce of World War One is one of those stories that has been mixed and confused over time, even to the point that some people would argue whether it happened or not. What this book does through looking at British and German soldier accounts from the time is that there was a Christmas Truce, but it wasn’t one big truce it was various small Christmas truces that took part in certain parts along the WWI trenches. Some had a kickabout, some repaired trenches and others exchanged gifts. You see the reason was that soldiers were fed up with fighting and it was cold, wet and this was a war that people had been saying wouldn’t last long. Plus the truce in places lasted longer than just Christmas, but if you think about it when nobody is fighting you can bury dead bodies, sit and eat or simply just get out of muddy holes in the ground. This was a very good read, one I thoroughly enjoyed and it was well written. For once it was nice to read about a war where there were some lighter moments and a bit of humanity being shown, even if a couple of days later they had to go back to fighting.

An amazing account of the Christmas truce - it doesn't get better than this.

"This readable and thoroughly researched book is a welcome volume to the historiography of the First World War."

There have been several books written in the past twenty years on this subject, each of which has added something to the discussion. Unfortunately to a greater or lesser degree they have been anchored on the ‘miracle’ of the truce and intentionally or otherwise support the overly simplistic view trotted out in the popular press almost every year. This book tries to be more objective and draws on more resources from the German side of the line. Inevitably if one has studied the subject in depth there are compromises and omissions in the narrative but these are generally minor such as the 6th Cheshires being in the line under instruction from the Norfolks; where are the accounts from the Norfolks? My colleague Steve Smith who is expert on the Norfolks could no doubt add more in that context. However such comment is at the margins. The book is an advance on the existing books on the subject and deserves to be read.