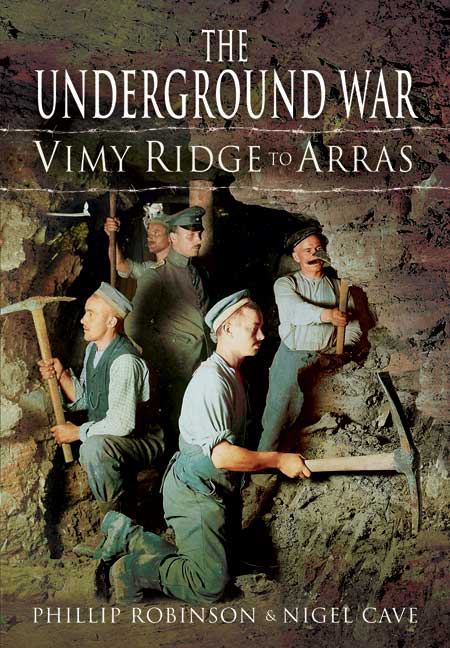 Click here for help on how to download our eBooks
Add to Basket
Add to Wishlist
You'll be £4.99 closer to your next £10.00 credit when you purchase The Underground War. What's this?
Need a currency converter? Check XE.com for live rates

This is the first part of a planned four-volume series focusing on a hitherto largely neglected aspect of the Great War on the Western Front - the war underground. The subject has fascinated visitors to the battlefields from the very beginning of battlefield pilgrimages in the years immediately after the Armistice, and locations such as Hill 60 and the Grange Subway at Vimy have always been popular stops on such tours. Three other volumes will follow, covering the Somme, Ypres and French Flanders. Each book in the series has a short description of the formation and development of Tunnelling Companies in the BEF and a glossary of technical terms.

This volume looks mainly at the central Artois, the environs of the whole line of the Vimy Ridge to the River Scarpe and Arras. It does not aim to be a complete treatment of the intensive mining operations along this front. It concentrates on mining, in the area of Vimy Ridge, in Arras itself and at the use of ancient underground quarries, taking Roeux as a good example. There are extensive descriptions of mining on and around Vimy Ridge, including photography and explanations of systems that have been accessed recently but are closed to the public, such as the Goodman Subway.

The narrative draws on French and German archival material and personal descriptions. The text is illustrated with numerous diagrams and maps, in particular from the British and German records, and there is an exhaustive guide to the Grange Subway. Other sites open to the public, in particular the Wellington Cave, are also explained and put into context.

"BBC History - Archaeologists are beginning the most detailed ever study of a Western Front battlefield, an untouched site where 28 British tunnellers lie entombed after dying during brutal underground warfare. For WWI historians, it's the "holy grail"."

There are many illustrations and maps to aid the reader - the Tours section is extremely well provided for and can be easily followed by the armchair tourist as well as being on the ground. This is an excellent account of the underground war, the result of meticulous and detailed research with first-rate maps and illustrations. If you are planning a trip to the Vimy Ridge to Arras sector your visit will be greatly enhanced by reading and taking this book with you. Highly recommended.

THIS book is about underground warfare on the Western Front in the First World War, from Vimy Ridge to Arras. The story of heroic men who tunnelled and mined for supremacy underground, men who never received the recognition they deserved.

It is a superb account of the development of tunnelling techniques and contains vivid personal descriptions of a different kind of warfare. Phillip Robinson and Nigel Cave are writing three further books on tunnelling – the Somme, Ypres and French Flanders.

The Underground War is a fascinating read.

It provides a comprehensive entry point into what is a whole sub-genre of the Western Front experience. There are a large number of interesting diagrams and maps, plus many photos that I suspect may be seeing publication for the first time. These alone make the book a good investment.

Despite the summaries contained at its start, this book is not really for those new to the First World War or military history. Its value can be best appreciated by readers who have some knowledge already of military operations on the Western Front and who are looking to expand their understanding of same.

It should be an essential requirement for anyone planning a visit to the battlefields of Vimy and Arras – in my view, don’t leave home without a copy (already well-thumbed) in your rucksack.

I look forward with anticipation to the second volume.

The research is very good, drawing from German and French archival material. Illustratioins and diagrams are good throughout, which is very important in a book like this.

The Underground War is that rare combination of a deeply researched and very detailed book that is also very well-written and engages both historian and layman alike. It is enlived by many first-hand accounts from the soldiers and tunnellers and excellent photographs and maps which vividly bring to life that grim, yet invisible subterranean war….Robinson and Cave look not only at the technical nature of the tunnelling and mining, but also the existing topography and they include a fascinating section on touring the relevant battlefield, that enables visitors to find what still remains, and visit sites open to the public. If you have any interest at all in the First World War, then this book comes highly recommended.

This profusely illustrated volume is based on research in British, French and German archived giving details mining in the Vimy Ridge – Arras zone. There are many photographs of the men who undertook this dangerous and claustrophobic work.

This first book in the series details the extensive mining operation along Vimy Ridge to Arras. The authors explain the background to the mining operations and they provide comprehensive maps of the network of runnels that covered this stretch of the front. Helpfully, the authors, Phillip and Nigel, have included a number of tours of accessible sites associated with the underground war.