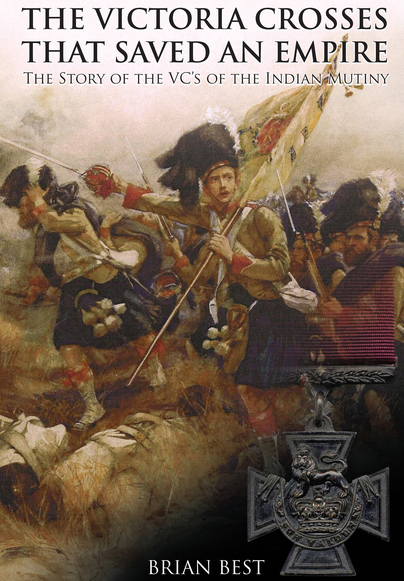 The Victoria Crosses that Saved an Empire (Kindle)

The Story of the VCs of the Indian Mutiny

Click here for help on how to download our eBooks
Add to Basket
Add to Wishlist
You'll be £4.99 closer to your next £10.00 credit when you purchase The Victoria Crosses that Saved an Empire. What's this?
Need a currency converter? Check XE.com for live rates

The Indian Mutiny struck at the very heart of the British Empire. If India was lost the whole edifice of British domination across its colonies was in jeopardy. Everything was at stake, Britain’s leading role in the word, its international commerce and the reputation of its armed forces.

Across the globe Britain ruled only through the compliance of the subordinate nations – but if India could throw off the imperialist yolk others might also rebel. The very fate of the Empire hung in the balance.
The situation was considered to be so serious that the British authorities extended the warrant of the newly-created Victoria Cross to include anyone, even civil servants, who performed prodigious acts of valour to save India, and save the Empire.

A total 182 VCs were awarded during the Mutiny, the same number as in the whole of the Second World War, climaxing in one day at Lucknow when twenty-four men displayed extraordinary valour to raise the siege – the most VCs ever won in a single day.

This is the story of those few months between May 1857 and June 1858 when the world turned its gaze upon the jewel in Victoria’s crown and 182 men – soldier, sailor and civilian – wrote their names into the history books.

This is a most readable account of a well-known Victorian incident and is an excellent effort and certainly recommended.

This is the story of those few months between May 1857 and June 1858 when the world turned its gaze upon the jewel in Victoria's crown and 182 men wrote their names into the history books.

Brian Best's eleven chapter book chronicles each major battle, beginning with The Siege of Delhi from May to September 1957, through to the conclusion at Lucknow from November 1857 to June 1958.

A very well-presented book, broken up by eight pages of colour plates in the centre, this is a must for a VC enthusiast and those interested in the many wars and battles which took place during Queen Victoria's long reign.