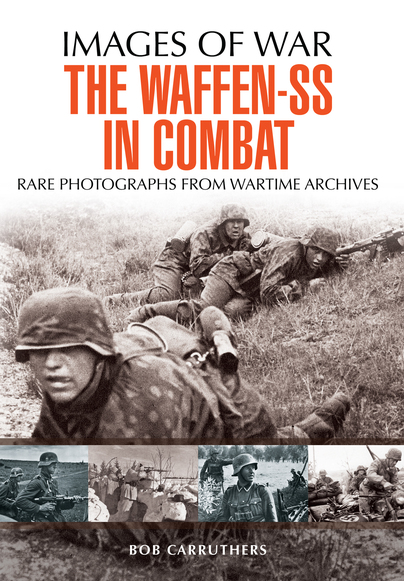 The Waffen SS in Combat (Kindle)

Click here for help on how to download our eBooks
Add to Basket
Add to Wishlist
You'll be £4.99 closer to your next £10.00 credit when you purchase The Waffen SS in Combat. What's this?
Need a currency converter? Check XE.com for live rates

This is the photographic history of the Waffen-SS in combat on all fronts. The short six year history of the Waffen SS spanned triumph and disaster, and their story can be traced through these powerful images, which clearly document the reality of combat from 1940 to 1945.

These rare images span the combat history of the Waffen-SS from the optimism of the opening phases of the war in the west through the challenges of Barbarossa and the long and bloody retreat against a numerically far superior enemy in both the east and the west. This powerful photographic record is essential reading for anyone with an interest in the course of the war from the German perspective and clearly demonstrates the scale of the task undertaken by the Waffen-SS on all fronts.

As a modeller who has come to appreciate period visual references this is another title as part of Images of War from Pen and Sword that will get well thumbed during my time. The captions are well written and provide decent levels of information for the viewer to pick up on and utilise. Three images that struck me are of SS soldiers with full smiles on their faces something I cannot recall having seen before as they are nearly always steely faced images. Another great title in the series that is very affordable and offers great visual details.

Another IoW series addition with the now expected
outstanding and rare images. This is the comprehensive view of Waffen-SS activities filmed through the war, much recommended.

This collection of b&w historical photos from WWII showcases photos taken by
the Germans for propaganda purposes and published in newspapers, magazines,
and books between 1940 and 1945. Many of the photos come from the
Kriegsberichter Kompanie(Waffen-SS War Reporters Company), led by
Gunter d’Alquen, which recorded actions of platoons. The photos are grouped in
three sections on the activities of the Waffen-SS in the west in 1940, in the
east in 1941-1943, and in combat and defeat 1943-1945. Each section begins with
an introduction giving context on the origins of the photos and the
photographers and crews involved. There is also background on the units,
platoons, and divisions photographed.

A new title in the publisher’s Images of War series using rare photographs from wartime archives, this is photographic history of the Waffen-SS in combat on all fronts. After a short introduction, the rest of this 160 softback is taken up with an interesting wide selection of contemporary images of men and equipment.
These photographs demonstrate the scale of the tasks undertaken by the Waffen-SS, ranging from the optimism of the opening phases of the war in the west, through the challenges of Operation Barbarossa and the long retreat against a numerically superior enemy in both east and west.

The collection of photos is most certainly impressive and of interest to those looking for information on what the SS soldiers looked like... The book is valuable for the many photos, especially for WW2 buffs and scale modellers.

Pen and Sword’s “Images of War” is a well known series of books that publish, often for the first time, rare photographs from wartime archives. “The Waffen-SS in combat” is a photographic history of some of the most elite of German’s armed forces as they fought on all fronts during World War II. The 160 page soft cover book traces all of the major campaigns and reflects the triumph and ultimate defeat of the troops that were formed originally as the Nazi Schutzstaffel (SS, "Protective Squadron")

There are three chapters that cover the Waffen-SS in the West -1940; the Waffen-SS in the East -1941-1943; and the Waffen-SS in Combat 1943-1945. Each chapter has a short but comprehensive narrative that sets the scene, followed by a series of black and white photograph accompanied by a short caption. The majority of photographs are of Waffen-SS infantry both at rest and in combat, but there are also numerous photographs of armoured fighting vehicles. Some have been published before but the vast majority are previously unseen. The pictures have been well selected and virtually every page has something to offer the model maker either as a close up study of individual soldiers or a longer shot that will serve as a source of inspiration for diorama builders.

One of the interesting aspects of the book is that the photographs reflect how the war went from the German triumph in the west and in the early stages of the war in the east to eventual bitter defeat on all fronts. Both triumph and disaster reflected in the faces of the troops as we progress through the book. In the first chapter with the triumphal sweep through France and the Low Countries the troops look fresh and enthusiastic. In chapter two we see the early signs of the strain resulting from fighting in the atrocious conditions on the Eastern front and by chapter three we see exhausted and demoralised soldiers.

Bob Carruther’s narrative outlines that whilst the Waffen-SS were the elite troops of Germany they were a pivotal part of Hitler’s inhuman political philosophy and were responsible for many of the worst atrocities of the Second World War. The narrative outlines in the final chapter that whilst troops of the Waffen-SS fought bravely against increasingly overwhelming odds, this must be balanced against the utter ruthlessness that some of the soldiers demonstrated against Jews, Soviets and the Poles during the Warsaw Uprising.

In conclusion-another winner from Pen and Sword. There have been many books written about the Waffen-SS from a variety of angles. This is an authoritative volume on the topic that will prove of use to model makers and Second World War historians who will find many new photographs here. Highly recommended for all interested in Second World War German troops. Many thanks to Pen and Sword for the review copy.

After a brief one or two page introduction to each chapter “setting the stage” as it were, the book is mostly photographs BUT the photographs have captions that show why Carruthers is a leading military historian. The captions though short are thorough and descriptive and let you know what is going on in the photograph and also what is the surrounding result or the time frame of the war at the time the photograph(s) were taken.

The subject of the Waffen-SS can attract some differing views but books on the topics are always popular... Good value as ever and another addition to the popular Images of War series.