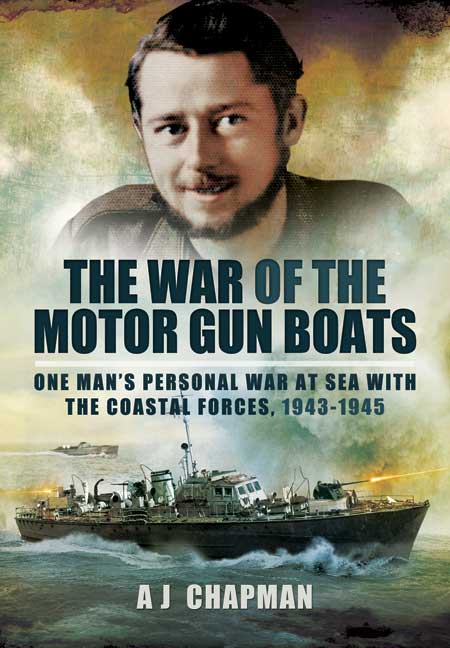 The War of the Motor Gun Boats (Hardback)

Add to Basket
Add to Wishlist
You'll be £19.99 closer to your next £10.00 credit when you purchase The War of the Motor Gun Boats. What's this?
+£4.50 UK Delivery or free UK delivery if order is over £35
(click here for international delivery rates)

Tony Chapman was born in Southampton in 1924. Aged 16 he watched with horror as the historic High Street of Southampton burnt to the ground in a firestorm caused by a heavy German bombing raid on the night of 30 November 1940. He vowed to join up and fight back. Tony joined the Navy.

Within hours of being posted to his first Motor Gun Boat, Telegraphist Tony Chapman was involved in an epic Coastal Forces engagement when his flotilla took on a force of thirty E-boats. Although their unit of two MGBs sank three E-Boats, it was at a high cost. Half of Tony's shipmates were killed or injured.

This was the start of an eventful and dramatic wartime service with these little warships. Tony's flotilla operated in the Mediterranean and Aegean where the Motor Gun Boats played a key role in this important but often neglected theatre.rnDaily life on these small ships is vividly described. The flotilla had a busy time showing the flag in the Levant and on combined operations in the Aegean with the Greek Sacred Regiment of Commandos. The culmination of their efforts was when Tony's boat, ML838, took the surrender of the Island of Kos in 1945.rnrnWritten from the perspective of one of the “other ranks”, War of the Motor Gun Boats fills an important gap in the literature of the Second World War.

As featured in the North Devon Journal and Exmoor Magazine.

He writes with humility, counting himself lucky to have missed service on the Murmansk Run or the Malta convoys. But most of all he gives a sense of a life lived joyfully...Engagingly written memoirs of a lower-deck telegraphist...He writes fluently and with a nicely self-deprecating wit which make this an enthralling but easy read.

This is one man's personal war at sea with the Coastal Forces 1943-1945. His account of his introduction to war in the English Channel and later a more in depth escapades in the Mediterranean and Aegean make this a very enjoyable read.

A most enjoyable book and any 'Ton' man, especially those who served on Inshore Sweepers, will relate to the description of living on board small ships and the camaraderie that lives to this day.

This is the personal story of a Telegraphist serving in RN Motor Launches and Motor Gunboats at home and in the Mediterranean from 1943 to 1945. Chapman gives us a vivid matelot’s picture of life on the Lower Deck and how he and his like certainly earned their Hard Lying money.

Chapman writes well, with no little wit, and indeed, as well as the grisly bits, beautifully captures the farce that bubbles up from naval life. Besides his at times gripping narrative there is a fascinating selection of photographs, particularly those showing his shipmates, to a man Jack the Lad with their caps flat-aback and their cap tally bow over the nose. The certainly earned their hard-lying money.

His new book is the culmination of more than a decade of memory bank-minding.
Recalled in vivid detail in The War of the Motor Gunboats as well as the everyday lifestyle.
I thoroughly recommend this very readable memoir of a patriot who was happy to do his bit defending this country during the war.

About A J Chapman

Tony Chapman was born in Southampton in 1924. Aged 16 he watched with horror as the historic High Street of Southampton burnt to the ground in a firestorm caused by a heavy German bombing raid on the night of 30 November 1940. He vowed to join up and fight back. Tony joined the Navy. The War of the Motor Gun Boats can only be published because Tony wrote a letter to the local paper in 2005 expressing his gratitude to Roger Lightoller for saving his life. This stirred the embers and led him to consider publication in rememberance of the time and the people.