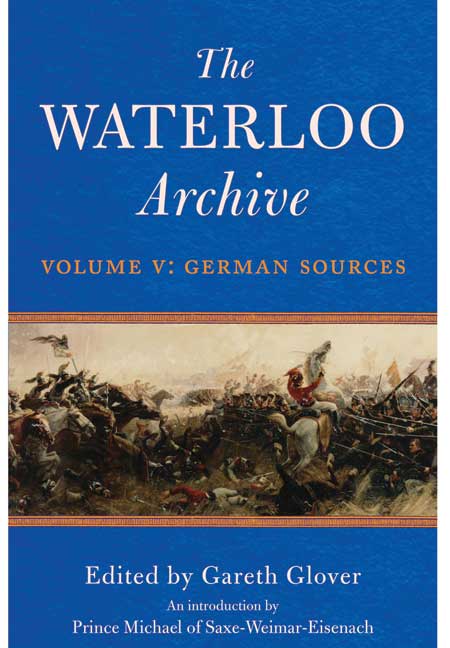 Click here for help on how to download our eBooks
Add to Basket
Add to Wishlist
You'll be £4.99 closer to your next £10.00 credit when you purchase The Waterloo Archive: Volume V. What's this?
Need a currency converter? Check XE.com for live rates

Much of the material available to readers in the English language interested in the exploits of the troops of Hanover, Brunswick and Nassau is in the form of dry official reports which stick to the basic facts and avoid all sentimentality and emotion. However, unbeknown to virtually anyone in the English speaking world interested in the more human aspects of these 'foreign' troops fighting alongside the British at Waterloo, there are a number of memoirs and sets of letters which have been published in Germany over the last two centuries.

Until now, these had never been translated into English and so have been inaccessible to the vast majority. This volume seeks to put this right and to bring to life the human story of these German troops – their trials and tribulations, their sufferings and their emotions – and to finally reveal their views on the battle which many entered with mixed emotions.

Highlights include an account of the confusion in the final 'great advance' at Waterloo; eyewitness recollections of the defence of La Haye Sainte; rare battle reports by the Duke of Wellington; and a fascinating series of letters explaining the whereabouts of a number of 'missing' Hanoverian regimental and staff surgeons and subsequent court martials.

Another superb book in this series.

This volume seeks to bring to life the human story of these German Troops – their trials and tribulations, their sufferings and their emotions – and to finally reveal their views on the battle which many entered with mixed emotions.

Excellent. Covers a good range of participants, and includes accounts of the days after the great battle.

This is a marvellous addition to our understanding of the campaign, the army and the era in general.

An incredible collection of primary sources.

Historians and students of the 1815 campaign will find fresh items of real value in these books.

The book works through the various north German Contingents, adding a Prussian account at the end just to be exotic.
With the reservation that you have to be very into Waterloo, this is a fine book, to be highly recommended.
It is the most surprising and most enjoyable volume of the Waterloo Archive so far.

‘A superb collection of material that will absorb the knowledgeable and the newcomer alike.’

‘The sheer depth and richness of personal accounts and other documentation associated with the battle of Waterloo is demonstrated by this collection of sources about the campaign.’

‘A great addition to our Napoleonic knowledge.’

‘The Waterloo Archive is going to be one of the most valuable sources of information available on the campaign of 1815, as Gareth Glover brings into the public domain much of the hitherto unpublished archival material written by the various nationalities who took part in Volume I brought us material from the British Participants: this second volume presents a wealth of material from the German perspective of the campaign - Hanoverian Kings German Legion, Brunswick and Nassau, that provides an important non-British version of events.’