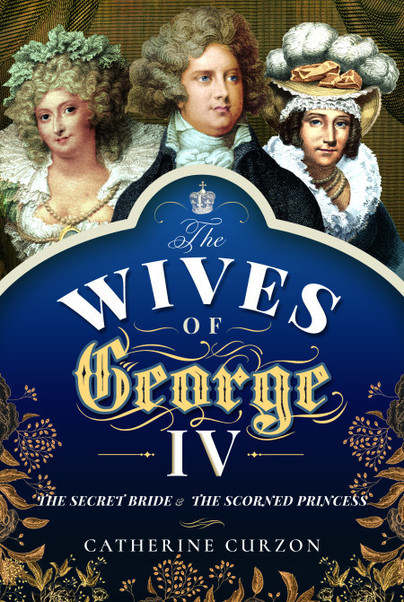 The Wives of George IV (Kindle)

The Secret Bride and the Scorned Princess

Click here for help on how to download our eBooks
Add to Basket
Add to Wishlist
You'll be £1.99 closer to your next £10.00 credit when you purchase The Wives of George IV. What's this?
Need a currency converter? Check XE.com for live rates

In Georgian England, few men were more fashionable or more eligible than George, Prince of Wales. Wild, glamorous, and with a penchant for beautiful women, the heir to George III’s throne was a very good catch – or so it seemed.

The two women who married him might beg to differ. Maria Fitzherbert was a twice-widowed Roman Catholic with a natural aversion to trouble. When she married the prince in a secret ceremony conducted in her Mayfair sitting room, she opened the door on three decades of heartbreak. Cast aside by her husband one minute, pursued tirelessly by him the next, Maria’s clandestine marriage was anything but blissful. It was also the worst kept secret in England.

Caroline of Brunswick was George’s official bride. Little did she know that her husband was marrying for money and when she reached her new home in England, she found him so drunk that he couldn’t even walk to the altar. Caroline might not have her husband’s love, but the public adored her. In a world where radicalism was stirring, it was a recipe for disaster.

In The Wives of George IV: The Secret Bride & the Scorned Princess, Maria and Caroline navigate the choppy waters of marriage to a capricious, womanising king-in-waiting. With a queen on trial for adultery and the succession itself in the balance, Britain had never seen scandal like it.

I already knew I'd like this book as I've read a few by the author and I was not let down. She is such a master of the Georgian period and this was no exception.

This was a book that tells the stories of two very different women in the life of George IV, Maria Fitzherbert and Caroline Brunswick. In what I shall describe as quite varied and lets’ say emotional love life, George IV certainly knew how to pick them. The book is a really enjoyable read and very well written book by Catherine Curzon, while having read a previous book of hers pays a lot of attention to detail and thought. I must say admittedly having not had a great knowledge of the relationship of this particular royal family, I have learnt so much from the author’s books and found them to be an entertaining read.

Wow this was one amazing book! Once I started I couldn’t stop.

I would recommend this biography to fans of British History. While I’m not completely unfamiliar with the Regency era, since I am a fan of Austen, I’ve not been reading up on the monarchy in this time period so there was a lot of learn and enjoy in this book.

I've always been a British Monarchy Sucker, and even more so a lover of the 18th century so this was right up.my alley. I knew a bit about Caroline, and even less about Maria, but I learned so much about both from this book.

It can be hard to find history books that aren't dull and dry like a textbook, and this book was the exact opposite. It was very entertaining and easy to follow and I enjoyed it very much!

I've always enjoyed Catherine Curzon's biographies, and this one was no different. Her writing style is very easy to digest, and she lays out the facts in a way that is very entertaining. I liked how she divided the chapters between Maria and Caroline, and I really loved her take on them both. She didn't pit them against each other or made out one was better, but showed them in a very sympathetic light, especially with Caroline. I also liked how there was a touch of humor in the writing, and there were a few times that I couldn't help from laughing. Definitely learned a lot from this book and would recommend to anyone interested in the Georgian period.

The turbulent and generally unhappy love life of the onetime Prince Regent and later George IV is tackled here in this readable and informative account by prolific history author, Catherine Curzon. A notorious womaniser, the oldest son of George III, first 'married' widow and renowned society beauty, Maria Fitzherbert after winning her over following an intense campaign of harassment, letter writing and threats of suicide. The marriage was, in fact, invalid under the terms of the Royal Marriages Act, as she was a Roman Catholic. His marriage to Caroline of Brunswick meanwhile was imposed upon him and was a disaster. On first meeting his future wife, the Prince immediately demanded a brandy as meeting her made him ill, a practice he continued at the Royal Wedding which he was drunk throughout. Although not entirely blameless herself, Caroline was fiercely mistreated by George and won lots of public support but the marriage ended in a bitter and messy divorce. An enjoyable account of two very different women who never met but who both played a small but significant part in British history.

The book is well researched and relies heavily on sources from the time, which brought each character to life.

Never a dull moment with George IV and his marital woes! It's actually a lot of fun to navigate through the emotional mess this unscrupulous man has selfishly created around his ever growing girth during his eventful and self-centered existence.
Stuck between a doomed morganatic union to a demure and submissive Catholic woman who deserved sainthood and a royal marriage with his first cousin, a fat and slovenly moron hailing from dreary Brunswick, the Teutonic wrecking ball who took great pleasure in making her dear husband's life an absolute hell, it's simply very entertaining to see him squirm, rage, bitch and getting very close to an apoplectic state every time that devious and obnoxious Caroline decides to misbehave! It's just fantastic😂😂

As usual Catherine Curzon as given us a masterful dual portrait of two very different women and a rollicking tapestry of Regency England. A treat to be enjoyed without any moderation whatsoever 👍👍

I had read something recently about Maria Fitzherbert so when I saw this come up on Net Galley I jumped at the chance of reading it. And I'm glad I did. If you love to discover more about our kings and queens and how they lived you'll love this. What I actually discovered was that things haven't changed much. The scandals, the slanders, the rumours, and the lies are all there in this brilliantly observed and well-researched manuscript. There were no dry paragraphs, but I was astonished to read the letters sent between them all, particularly the letters from Caroline of Brunswick when she was pleading her case to see her daughter who she only allowed to see occasionally. The letters from 'Priny' as George was know were a revelation in how grasping he was.
George, the Prince of Wales was a truly unpleasant character, greedy, his corpulence attested to it, self-centred and needy, he expected the women in his life to jump to his every whim. Both women had ultimately sad lives thanks to him, their reputations besmirched by their association with him. Neither found true love. One loved him dearly and the other dearly wanted to. One wonders why!