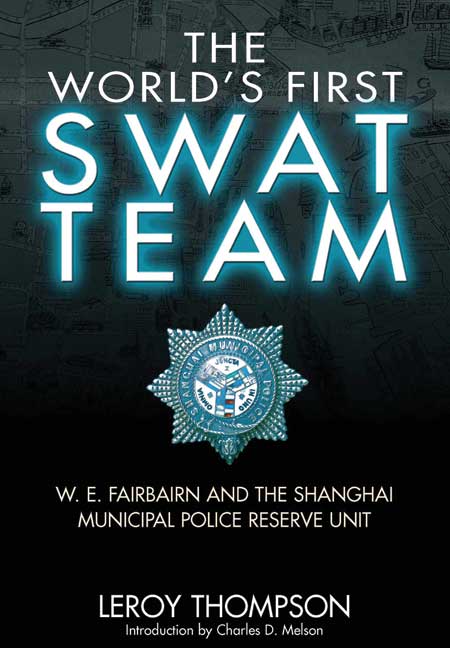 Click here for help on how to download our eBooks
Add to Basket
Add to Wishlist
You'll be £4.99 closer to your next £10.00 credit when you purchase The World's First SWAT Team. What's this?
Need a currency converter? Check XE.com for live rates

In turbulent Shanghai in the years between the world wars, the International Settlement was a mercantile powerhouse that faced unrest from Communist labour unions, criminal gangs, spies, political agitators, armed kidnappers and assassins. Adjoining the Settlement were the French Concession and the Chinese city, both hotbeds of intrigue and crime themselves. Called the most sinful in the world, the Settlement relied on its police: the Shanghai Municipal Police, one of the most advanced forces in the world.

After an incident in 1926 when the police fired upon demonstrators, which resulted in unrest and strikes, W. E. Fairbairn was charged with forming a specialised unit to deal with riots and armed encounters. The resulting Reserve Unit became the prototype for future SWAT teams, as it developed tactics for using snipers in barricade and hostage incidents, techniques for use of the sub-machine gun during raids, hostage rescue tactics, aggressive riot-dispersal tactics and various other tactical innovations.

Out of the experiences of the unit came many of the techniques later taught by W. E. Fairbairn, E. A. Sykes, Pat O'Neill and others to the Commandos, Rangers, SOE, OSS, 1st Special Service Force and other Second World War elite units. Those same techniques still resonate today with special forces and police tactical units.

Like Joseph, this book has a coat of many colours. It is by turn a history book, a travel guide and a social circular. It then progresses down a lively path of pen portraiture, offers pistol instruction, it is a martial arts guide and a ballistics reference. All this wrapped up in crime reports as a kind of police gazette. My son would call it Blue Peter for adults and if you asked me to provide a wants list for my ideal history book then this would pretty much be it. We don’t as yet give out stars, Amazon style, at WHO; but if we did this excellent book would get all five with one more for luck.
Leroy Thompson’s great skill is to tread lightly with such serious stuff as deadly martial arts and close quarter pistol shooting and as an expert in these policing matters he manages to leave his anorak at home before it gets too much. American books can sometimes be very serious in tone and I often find I am being lectured in the style of the minister in The Simpsons, but not in this book. He understands the international flavour of things and a lot of authors from all corners of the globe could learn from this. I love it. www.warhistoryonline.com

The book paints a vivid picture of life in Shanghai at a time when civil unrest, crime and the influence of Japan posed a growing challenge. The author, an American, is an authority on modern police and Special Forces techniques and goes into great detail on equipment and tactics. He also highlights the historical importance of experience gained from contact with Fairbairn by the United States Marine Corps units who served in Shanghai.

This book is also illustrated with many original pictures, some previously unpublished. Extremely well written I could not put this book down until finished. I would certainly recommend it. Do not miss this book.