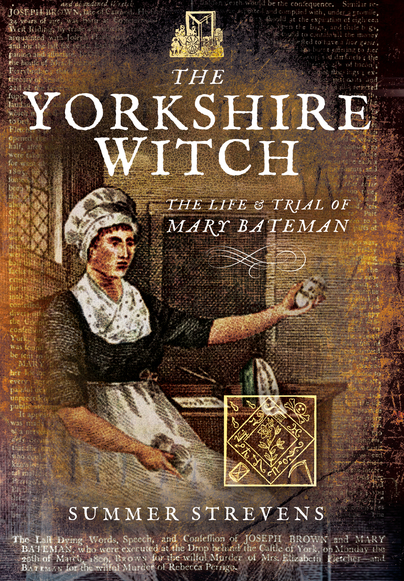 The Life and Trial of Mary Bateman

Click here for help on how to download our eBooks
Add to Basket
Add to Wishlist
You'll be £4.99 closer to your next £10.00 credit when you purchase The Yorkshire Witch. What's this?
Need a currency converter? Check XE.com for live rates

On the morning of 20 March 1809, the woman who had earned herself the title of The Yorkshire Witch was hanged upon Yorks New Drop gallows before an estimated crowd of 20,000 people. Some of those who came to see Mary Bateman die had travelled all the way from Leeds, many of them on foot, and many of them were doubtless the victims of her hoaxes and extortions. A consummate con-artist, Mary was extremely adept at identifying the psychological weaknesses of the desperate and poor who populated the growing industrial metropolis of Leeds at the turn of the nineteenth century. Exploiting their fears and terror of witchcraft, Mary Bateman was well placed to rob them of all their worldly goods, yet she did much more than cause misery and penury; though tried and convicted on a single murder charge, the contemporary branding of Bateman as a serial killer is doubtless accurate. Meticulously researched, this accessible, and at times shocking retelling of Mary Batemans life, and indeed her death, is the first since the publication chronicling her criminal career appeared in print in 1811, two years after her execution. Not only focusing on the details of her felonies and the consequences to her victims, it also examines the macabre legacy of her mortal remains, a bone of contention (literally you might say!) with the continuous public display of her skeleton in the Thackray Medical Museum until the recent removal of this controversial exhibit.

I enjoyed how Strevens’ put this book together, it read well as a nonfiction and had enough creativity to keep me reading. I particularly liked how the time period was described, this added to my reading experience in a positive way. The centre of the book has glossy photos which always gets bonus points from me in a nonfiction read!... I’d recommend to British history enthusiasts, particularly folk who have lived in and around Leeds and York. A lot of settings would be familiar to folk who dwell in these parts!

The book is well researched, and the information is presented in an easy to follow narrative. This is a good reference book for anyone that likes historical non-fiction. There are many photos and drawings included in the book.

The great strength of this book is its wealth of social history that puts Mary’s life and actions in context. There are details about the lives of servants; housing conditions in the growing industrial centres; the rise in religious fervour and millenarianism; and the prevalence of superstitious beliefs. These help the reader understand how Mary’s victims saw the world and why they were duped by her. There are also interesting accounts of early toxicology; how crimes were prosecuted; the treatment of female convicts; and public executions.

Exploiting the vulnerable and deceiving the desperate were skills Mary Bateman excelled at. Known as the ‘Yorkshire Witch’ many believed that Mary Bateman did indeed possess powers to communicate with spirits and have the abilities to banish evil. Those targeted by Bateman handed over their possessions and their money for her services and moving from place to place ensured this was a woman who could evade the discovery that she was a fraud. That was until she became too confident and used her so-called healing potions to poison unsuspecting victims resulting in their deaths. Only charged and convicted for one murder it is widely believed Mary Bateman was responsible for at least four, with possibly more victims not known about. Summer Strevens has written a well-researched book on the Yorkshire Witch that is enjoyable to read and not only informs of the criminal life of Mary Bateman but of the historical era she operated in. A very informative read which leaves no stone unturned when exploring Bateman's activities and her character right up to her very public execution in 1809 and it's aftermath.

In short, this is a very readable and well-researched account not only of one woman's life, but also the society she lived in.

A factual and genuinely interesting book, I had never heard of Mary Bateman, and the author managed to keep my interest up to the read.

Summer Strevens delves deep into the archives for this one - a fascinating tale of witchcraft and skulduggery in darkest Yorkshire in the early 19th century. Mary Bateman may have been one of the earliest serial killers, even though she was only convicted and found guilty of the one murder, enough to secure her sentence - hanging. An extraordinary story, brilliantly told.

I really enjoyed this book, as I grew up in Lancashire and near Lancaster castle where the famous Pendle witches were hung it was of special interest.. Not that you need this local knowledge as this book is easy to read and informative.

This work of nonfiction reads more like a fiction story which makes it much more enjoyable as non-fiction usually tends to be a lot dryer. I found Mary Bateman to be a fascinating subject especially for someone who studied psychology. This is well written and well researched very interesting read!

Mary Bateman was what the Americans in the Old West called a "Snake Oil Salesman", but much more.
At the time this book was set there were no doctors, social services or anyone whose job it was to look after the populace. She was persuasive. She knew how to influence and manipulate local people, who were simple folk, willing to grasp anything to make things better.
Quite rightly she was tried for her heinous crimes and hanged in York, where throngs of people came from all over to watch the execution, treated it as a day out. Evil Mary Bateman got the justice she deserved. There were numerous women and men who did the same, but "got away with it". A fascinating read and very highly recommended.

The Yorkshire Witch:The Life and Trial of Mary Bateman by Summer Strevens is a fascinating journey guided by facts, documents and suppositions about the life and times of a skilled, deliberate, calculating con woman and killer. I feel the tome would have been enhanced if the illustrations and photographs including A Yard in High Court Lane where Mary lived and the display of Mary Bateman's skeleton were interspersed within the text instead of being relegated to the book's ending. A thoroughly researched and informative read.

This is the story Of Mary Bateman and boy she was resourceful! I really enjoyed this read, I like forensics science and this book gave me a good idea about how things were done in the early times.

I really enjoyed this book. Boy was mary evil. I love reading about these times especially forensic. I loved the pictures too. Highly recommended. 5*

I have to say I really like The Yorkshire Witch. Summer Stevens does a wonderful job telling the story of Mary Bateman. Living as we do today, I love reading about the forensics of this time. There is no doubt that Mary was an evil person but she was definitely not a witch. This is easier for us in the present but at the time of her crimes it is easy to say why people believed it.