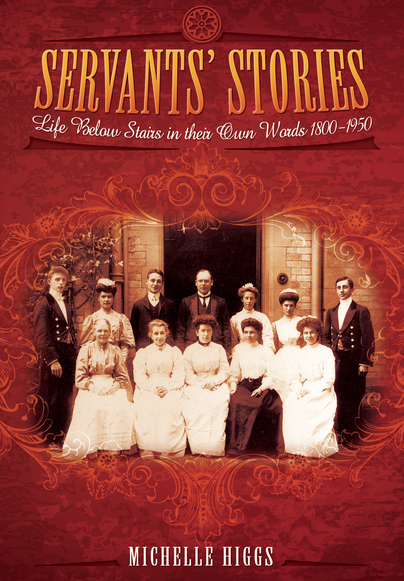 I can highly recommend her new book... Click me too to read the full article on Angela Buckleys blog

You'll be £12.99 closer to your next £10.00 credit when you purchase Servants' Stories. What's this?
+£4.50 UK Delivery or free UK delivery if order is over £35
(click here for international delivery rates)

Step into the world of domestic service and discover what life was really like for these unsung heroines (and heroes) of society. Between 1800 and 1950, the role of servants changed dramatically but they remained the people without whom the upper and middle classes could not function.
Through oral histories, diaries, newspaper reports and never before seen testimonies, domestic servants tell their stories, warts and all - Downton it isn't!
• Revenge on a mistress with a box of beetles
• The despair and loneliness of a 14 year old maid
• The adventure of moving to London to go into service
• An escape from an unhappy home life
Find out about the 'servant problem' and how servants found work; how National Insurance began to improve their lot; the impact WW1 had on domestic service; and what was done to try to make the occupation appealing to a new generation.
Praise for Michelle Higgs
'A delightful layman's guide for tourists from 2014, where you'll glean plenty of juicy detail to paint a more accurate picture of your ancestors' lives.'
Family Tree (for A Visitor's Guide to Victorian England)
'An enjoyable and well-written social history, helpfully revealing more about what life would have been like 'below stairs'.
Who Do You Think You Are? (for Tracing Your Servant Ancestors)
'Daily life is recounted with both historical detail and sympathy, aided by numerous first-person accounts.'
Your Family Tree (for Life in the Victorian and Edwardian Workhouse)
'A lively text which should do much to open up the world of the Victorian prison to the general reader.'
Who Do You Think You Are? (for Prison Life in Victorian England)

Discover real life below stairs as Michelle Higgs explores the lot of the domestic servant between 1800-1950. With stories sourced from oral histories, diaries, autobiographies, letters, memoirs and newspaper reports, the authentic voices of individual servants shine through, while the more general social history chapters place their experiences in context. These are the lesser-known 'warts 'n' all' stories of ordinary folk in service in the smaller homes of the middle classes, which is sure to enhance understanding of your own ancestors' daily lives in domestic service.

This is more than a mere anthology, interesting though that would be: Higgs provides useful background to explore a variety of issues around the subject.
It would be hard to find so may first hand accounts on this subject in one place elsewhere, and this is an excellent blend of social and oral history.

Extremely informative and features snippets from books, newspapers, and servants' accounts. The Personal accounts are often both intensely personal and very moving.
Reading this has given me a whole new understanding of the lives of my ancestors who worked as domestic servants.

How Hard They Worked!
Servants are the stars of the evocative look at life below stairs from the Regency era until the mid-twentieth century. Many of these Servants’ Stories are previously unpublished. Mary Ann Ashford was only thirteen when she began work as a maidservant, and it’s hardly surprising she was exploited by several employers. William Tayler, a footman, kept a diary which gives a fascinating insight into life working for the gentry in the 1830s. One young girl, Amy Grace Rose, left a good situation because her mother found her another place, and almost died from overwork. It was also very difficult for servants to ‘better themselves’ through education, as they rarely had a moment they could call their own. You’ll find yourself wanting to cheer on the rare occasions when a servant was able to turn the tables on an over-exacting employer. I thoroughly enjoyed reading these stories, some of which were extremely moving.
This book is essential reading whether your ancestor was a domestic servant, or if you are just interested in the world of domestic service and the real heroes and heroines who kept homes running like clockwork, often at the cost of their own health.

Michelle Higgs is a freelance feature writer, copywriter and author who has written a number of books on social history, particularly around the Victorian era. Michelle’s latest book Servants’ Stories: Life Below Stairs in Their Own Words, is a collection of oral histories, memoirs and biographies from servants covering the period 1800 to 1950, and it includes some great articles found in the British Newspaper Archive.