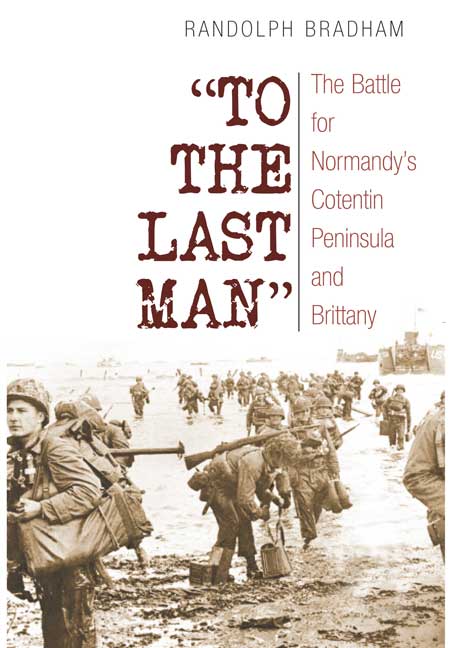 To the Last Man (Kindle)

Click here for help on how to download our eBooks
Add to Basket
Add to Wishlist
You'll be £4.99 closer to your next £10.00 credit when you purchase To the Last Man. What's this?
Need a currency converter? Check XE.com for live rates

Through thoughtfully constructed research, Bradham vividly presents the battle for Normandy's Cotentin Peninsula – one of the most important and yet understudied operations of the World War II.

This book provides a detailed overview of the battles that make up the Cotentin Peninsula Campaign, an important part of the invasion of Normandy. While historians often cite specific examples of the fighting that took place on the peninsula, most treat the battles as individual events or singular parts of the overall Normandy campaign. In this work Bradham takes a different approach, focusing on the unique set of battles that had to be fought in order for the Allies to secure their foothold on Normandy.

Bradham not only discusses the strategy used to secure the peninsula, but also gives detailed accounts of the major battles and tactical doctrine that was developed to fight them. Along the way he provides biographical information on the main actors, explaining how key personality traits along with personal relationships influenced their conduct while in battle. In doing so, the author outlines the effect of the campaign on the overall conduct of the war.