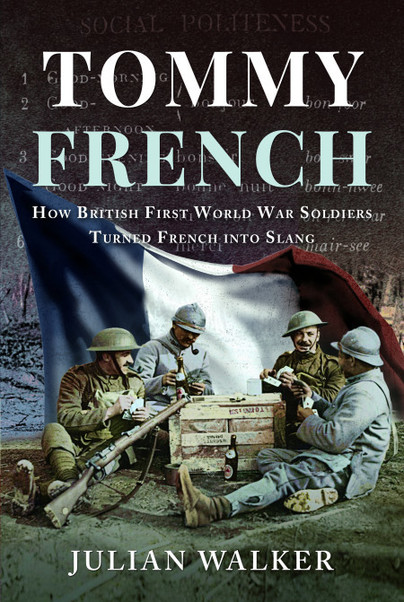 You'll be £8.99 closer to your next £10.00 credit when you purchase Tommy French. What's this?
Need a currency converter? Check XE.com for live rates

Having grown up on military camps you often find that the armed forces have their own lingo or language both those in the forces and their families. Even now I could have a conversation with my wife and kids and they wouldn’t know what I was going on about. So when I was offered the chance to review Tommy French I gladly took it. When men from different nations come together there has to be some way of getting along and the job done. This book clearly illustrates this well, in that whilst you have french and english one can’t dominate the other, so you have this fudge or formation of some sort where the two marry together. The author Julian Walker does a great job of illustrating the words and amalgamations, and it’s often great to see how these words are often still around in use even today in some way. I really enjoyed this book a lot mainly because I love words, sayings and books I would certainly recommend this to others.

To be read alongside Brophy and Patridge's 'The Long, Long Trail' and Martin Pegler's 'Songs and Slang of the Great War', this is a entertaining look at how Tommy Atkins made sense of the French language and then made it his own.

The British Army had plenty of practice in this matter, having spent years in India anglicizing Hindi. As Rudyard Kipling noted in 'Route Marchin'' in the 1890s, "Kiko kissywarsti don't you hamsher argy jow?" Kipling gets a couple of mentions and Brophy and Partridge are referenced multiple times, as they rightly should be, but this book is a welcome new take on soldier slang or the more polite 'Tommy French' as the title of the book tells us.

Well referenced and well indexed, Julian Walker's book draws on multiple sources and is also well illustrated. Thankfully, Pen & Sword issued this as a hardback. It is just as well, as a paperback could soon become very dog-eared.

For Centuries the British and the French fought each other off and on, in varying alliances of other parties. But WW I brought about something for which both sides were unprepared. The men of the two countries were allies in the trenches where they fought cheek by jowl together. Since the trenches blighted the landscape of France, both on the field and on leave, the soldiers were faced with a large challenge. How to communicate with the other side when you do not have any knowledge of their language.

So the British Tommy, with necessity being the mother of invention, created a new language that seemed to bridge the gap. They took French words and anglicized them as much a possible and turned them into slang. Some of the words have been passed down and are still in use today. It was a creative solution to a thorny problem as orders between troops and the interpretation of orders between allies was pretty important if you wanted to fight a battle in tandem. Moreover, just trying to purchase a good or service from the locals required the ability to understand and be understood.

Certainly some achieved greater success than others as it was unusual for someone not of a certain class to have taken any French at school. And as anyone who has taken a foreign language can attest, school book language is far different from local patter. But somehow for the duration they managed to muddle through and this book gives a detailed account, often in the first person, of the trials and tribulations that come from creating something that could be understood by most.

A Fascinating piece of social history.