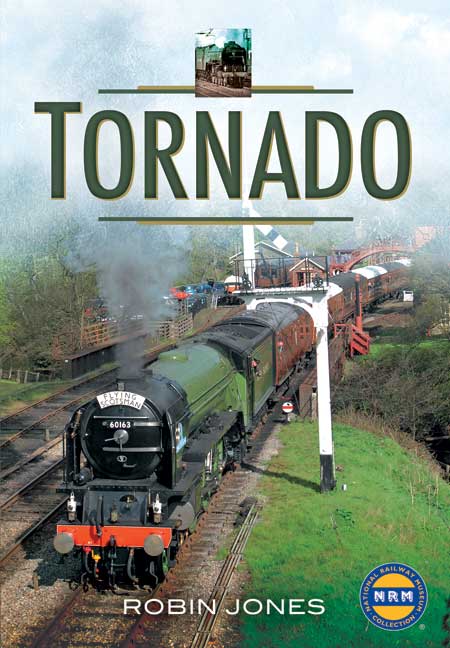 Add to Basket
Add to Wishlist
You'll be £19.99 closer to your next £10.00 credit when you purchase Tornado. What's this?
+£4.50 UK Delivery or free UK delivery if order is over £35
(click here for international delivery rates)

Officially endorsed by the A1 Steam locomotive trust, Tornado is the official account of the building of Britain's first main line steam locomotive for 50 years, how it took a team of volunteers 18 years to raise more than £2-million to build it and its international headline-grabbing debut on the main line, with a royal visit thrown in for good measure.

The book looks at the history of the A1 class and the East Coast Main Line which they were built to run on, the man who designed them, Arthur H Peppercorn, the preservation movement which evolved from a handful of volunteers saving a cash-strapped steam railway in central Wales in 1949 to the point where it could build a main line express passenger locomotive, and how the dream of building Tornado came to fruition stage by stage at Darlington.

Tornado is lavishly illustrated with both archive and contemporary photographs bringing the story up to date.

There is a wealth of photographs previously unpublished unpublished archive shots plus many modern colour views which have been specially commissioned for the book. This style of book permits an eclectic mix of interesting facts which might otherwise be quite difficult for the enthusiast to assemble.

The compelling story of the new build A1 is also told in equal depth but with slightly different emphasis in Tornado by well known railway author Robin Jones.

Tornado is both the journey of how a small group of people, completed an engineering feat of Herculean magnitude, and the history of the other great trains of the 1940's that inspired the Tornado to be built. The self proclaimed 'railway book like no other tells the story' of the Tornado, an idea that began in 1990 of building a locomotive steam engine from scratch and 19 years and 3 million pounds later turned it into a reality. The book hails the creation of the Tornado as a great technological achievement, bringing steam trains back onto British rails after 50 years of inactivity. The book presents the creation of the Tornado from beginning to end giving detailed descriptions and pictures of the 1940's trains that inspired its creation and the publicity and media attention that came during the publics support of the project and its final completion in 2009. The book reveals the full story of how the Tornado team came together to form the A1 steam locomotive trust, which prevents old steam engines being thrown into the scrap heap, the mammoth fund-raising task and the building of the locomotive. Robin Jones tells an inspirational story of the creation of the Tornado and the authors enthusiasm for the project is easy to see in the book. Tornado gives an interesting and inspirational account of a dream realised and is essential for train lovers across the country.