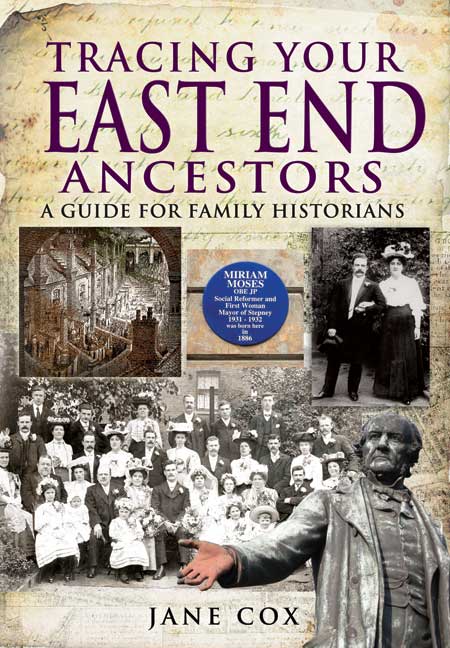 Click here for help on how to download our eBooks
Add to Basket
Add to Wishlist
You'll be £4.99 closer to your next £10.00 credit when you purchase Tracing Your East End Ancestors. What's this?
Need a currency converter? Check XE.com for live rates

‘East Enders are a very special breed and tracing your East End ancestry is going to be tremendous fun. Everyone has got some East End ancestors - and if they haven’t they invent them, rollicking chaps, larky and resourceful, talking a funny language to keep “them” guessing, eating at eel and pie shops, shouting out their wares in clattering, colourful markets. Their wives and masters (“ ‘er in doors”) are brazen lassies, smart as paint, tough as their men folk, presiding over an undoubted matriarchal society where Mum rules OK? The good tales are of bright little kids, unshod and street-wise, rising above their origins and making a mint. The bad ones are of indescribable horror - children dying in diseased heaps, infant sex for sale and gangs of armed bandits terrorising the neighbourhood.’

As author Jane Cox writes in the preface, the East End of our great grandparents’ days was another world, and her fascinating and accessible guide to East End ancestry will help you find out about it. She takes readers through the maze of courts and alleys that was the home of their ancestors, bringing to life that vibrant, polyglot society, and describing the many sources researchers can consult – archives, records, books, the internet – in order to discover the lives of individuals who lived in the area or passed through it.

The tight geographical focus of this book makes a real difference to its contents. Most books in this series look at a topic that isn't limited geographically, but is some other way such as service in a British tank regiment. As a result much of their material is quite general as the people bring studies could have come from just about anywhere.

“Overall, the volume provides a vibrant overview of the research possibilities in an area regarded as difficult by family historians.”

Cox explores the usual major sources available to family historians, and what specifics they offer for East End research. She also takes in records for immigrant groups, various religious denominations, and Poor Law records. A useful occupational chapter considers the most common of trades of people in the East End, from dockers to match girls and prostitutes – even the latter sometimes left a paper trail.

This is an excellent guide not just to the East End, but also to the vast majority of Londoners who were poor. A large proportion of family historians will come up with the need to research in London sooner or later, and while it is difficult, it is immensely easier than it used to be (especially from a distance) due to the proliferation of electronic resources.

All the major and a range of minor sources are described accurately yet succinctly (as you would expect from a former archivist at The National Archives). Cox uses examples from her own research to show how records can be used in practise, not just to build a dry family tree of names, dates and places but also to help you to understand your East End ancestors to real people.

Perhaps the best sections of the book are the appendices detailing parish and non-parochial records and resources of Tower Hamlets Local history Library, too often ignored by researchers.
The range of records that are available online are also well-described, although inevitably there have been some changes even during the time that the book has taken to reach the shelves! The bibliography is slightly odd, in that it includes some sources that are far too little known, rather than mentioning some that are all too familiar. This will no doubt prove welcome to more experienced researchers, but may be somewhat less helpful to beginners. However, the work benefits from not only a detailed list of contents but a full index.

Altogether, Tracing your East End Ancestors is a must for all genealogists researching family in this area of the country.

Who Do You Think You Are Magazine, July 2011

This starts with a case study of Tower Hamlets, before discussing research and sources, and the varied groups that made up the East End;s population. Again, this will probably be most use to family historians who have finished or are part way through their family history, and have traced a connection with the East End, even though their family has not lived there for many generations.

People love to boast about their east end ancestors whether they actually existed or not and perhaps until recently there weren't many ways to tell if they actually did. Tracing Your East End Ancestors allows this information to be uncovered, delving into the world of cheeky chaps, eel pies and pie shops. The book describes everything from the good such as stories of kids from nothing rising to riches to the bad such as child prostitution and disease ridden houses. Through clever bullet points and amazing images including ones of letters, the book is able to inform yet entertain the reader by detailing the many aspects of the east end and what their ancestors may have experienced. Through archives,records and books, Jane Cox utilises her twenty five years experience at The National Archives well and creates a comprehensive guide so useful maybe even a few northerners would dare to pick a copy up.

Jane Cox has already written a book on East End history, and she is an experienced genealogist. Her new book covers the area of the modern borough of Tower Hamlets, and the title page helpfully lists the parishes and hamlets involved. The author gives us a lively and authoritative history of the area, then guides us through its many sources for family history. The East End brims with history - medieval manors, pilgrim fathers, shipwrights and tailors, social reformers, strikes, workhouses, wave after wave of immigrants, the Blitz - and Jane Cox knows it all intimately.
She also has an encyclopaedic knowledge of the relevant records and where to find them, from the marvellous collections in the Tower Hamlets Local History Library and Archive to the ever expanding internet and national sources such as TNA, where the author used to work. The result is a pleasure to read. In any book like this, there are always going to be long sections of bare facts, but Jane Cox has a habit at just the right moment of enlivening her text with a moving story or quirky gravestone inscription.
Overall this is a marvellous book, one which will serve any East End researcher well for years to come.