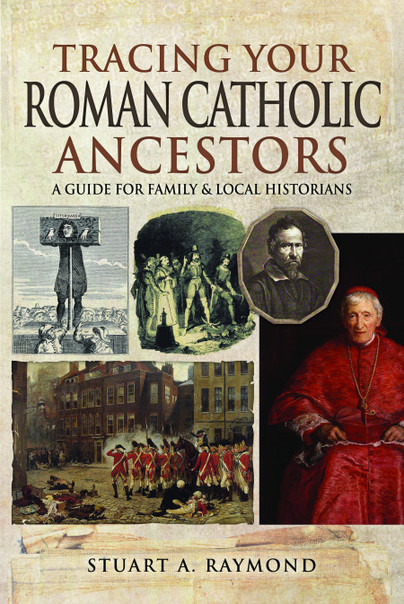 Click here for help on how to download our eBooks
Add to Basket
Add to Wishlist
You'll be £4.99 closer to your next £10.00 credit when you purchase Tracing Your Roman Catholic Ancestors. What's this?
Need a currency converter? Check XE.com for live rates

Tracing Your Roman Catholic Ancestors is the ideal handbook for readers and researchers who are keen to find out about their Roman Catholic ancestors and for anyone who wants an introduction to Roman Catholic history in general. Stuart Raymond provides a brief historical account covering the Roman Catholics from the sixteenth to the twentieth centuries, then goes on to identify the available sources, explaining their strengths and weaknesses. His accessible and authoritative book will be an essential source of insight and reference for anyone who is starting to explore this fascinating subject.

The Catholic church's structure is described, as are the various repositories where relevant archives and books can be found. Chapters are devoted to specific sources and what they can reveal about the church and those who were members of it. Much information concerning Catholicism is to be found in the records of repression. The records of Quarter Sessions and the Anglican ecclesiastical courts, together with central government sources, tell us much about our Roman Catholic ancestors, and are fully described. So are the records of Roman Catholic baptisms, marriages and burials. Other Roman Catholic records, such as confirmation lists, are also covered, as are records relating to Roman Catholic clergy and religious orders.

Stuart Raymond's handbook opens up the history of the Roman Catholic Church for researchers who want to gain an understanding of the religious lives of their ancestors and for those who have a wider interest in the history of religion.

As featured in: 'Registering Catholic Estates'

Not only does this book fill a long-felt gap in the market, but its appearance could hardly be more well-timed.

Raymond has managed to combine a luminously clear introduction to a complex subject with cornucopia of possibilities for more advanced researchers. This is now the essential tool for anyone interested in the subject.

This is a long overdue book supplying a much-needed resource, as so many people in England have Catholic ancestors...

... The book is an essential buy that should be in every family historian's library.

This is a good handbook for those researching their Catholic ancestors as well as anyone wanting a wider introduction to the history of Roman Catholicism.