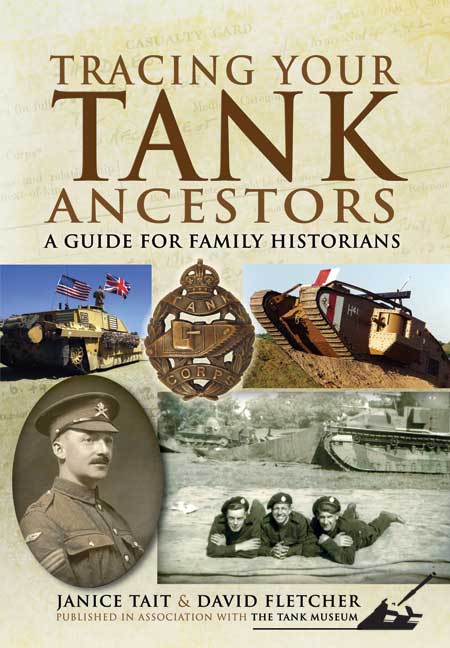 Family History Tanks By Industry/Profession Ancestors in the Armed Forces

Click here for help on how to download our eBooks
Add to Basket
Add to Wishlist
You'll be £4.99 closer to your next £10.00 credit when you purchase Tracing Your Tank Ancestors. What's this?
Need a currency converter? Check XE.com for live rates

If you want to find out about the career of a soldier who served in tanks, are researching medals awarded to a tank crew member or just want to know more about a particular regiment squadron or operation, this book will point you in the right direction.

Assuming that the reader has little prior knowledge of the history of British armoured forces, Janice Tait and David Fletcher trace their development from their formation during the First World War, through the Second World War and on to their role as an essential part of the British army of the present day. Most important, they demonstrate how you can explore this history for yourself. They describe the records that are available and show how they can help you to reconstruct the career of a soldier who served in tanks or was connected with them. They also describe the kind of work the soldiers did, the armoured vehicles they worked with, and the men and women they served alongside.

This accessible, information-packed introduction to the history of British armoured forces will be essential reading and reference for anyone who is researching this aspect of military history.

This work focuses solely on those who have served in tanks and not least of its recommendations is David Fletcher’s authorship. His expertise as historian of the Bovington Tank Museum’s is unquestionable, and in this work he is ably assisted by Janice Tait, the museum’s librarian and a keen family historian.
Certainly this work helps tape the route and mark the minefields for those seeking information about the men who served in tanks through eight decades in seven usefully illustrated chapters.

The Western Front Association, Stand To! No 94

“…it begins by looking at why the tank was needed and its development through both wars and up to the present day, It gives a comprehensive history of the battles where it featured and where to find the records as well as advice to researching the personnel who took part. A wealth of information for those with this particular interest.

You might be forgiven for thinking that none of your ancestors were ‘tanks’, but all teasing about this book’s title aside, this is of course a guide to learning about the careers of soldiers who serviced in the Tank Corps. It is produced in association with the Tank museum in Dorset, where both of the co-authors work.
Tracing your Tank Ancestors is useful if you want to know more about a particular tank squadron, regiment or operation. As such, it includes advice on researching the various medals awarded to tank crew members.

The historical element is useful in its own right, tracing the evolution of British armoured units from their naval origins, through the expansion during the First World War, the restricted inter-war years and the even greater expansion of the Second World War.
The family history element comes at the end of each chapter, and covered the same time period. The book has been produced in association with the Tank Museum at Bovington, and so its authors really know their stuff. A wide range of resources are discussed, from original documents, through published histories and on to the increasingly important websites.
This is a nicely focused work on family history, and also a useful guide to the evolution of British armoured forces.

“This latest guide from Pen and Sword’s sries specifically for family historians offer a concise history of British armoured units alongside advice on how to trace the careers of soldiers who served in tanks. It contains essential information on major archives, museums, websites and other sources for tracing your tank serviceman.”

“Copiously illustrated with photographs from the collection at the Tank Museum, the guide also features a useful appendix that lists all the regiments that served in the RAC in the Second World War. This book is sure to become the prime source for genealogists researching tank ancestors, as well as being a worthy addition to the bookshelves of anyone who has a wider interest in the subject.”

If you want to find out about the career of a soldier who served in tanks are researching medals awarded to a tank crew member or just want to know more about a particular regiment, squadron or operation, this book will point you in the right direction.

This accessible, information packed introduction to the history of British armoured forces will be essential reading and reference for anyone who is researching this aspect of military history.

If you want to find out about the career of a soldier who served in tanks, are researching medals awarded to a tank crew member, or want to know more about a particular unit or operation, this book, written by a pair of authors with unparalleled knowledge, ill point you in the right direction

Family history research is bringing people face to face with military history for the first time,” David said. “But as the memories of two world wars fade, the average family history researcher often has very little to go on – other than that they served in `the tanks`. This book has allowed us to deal with a lot of the questions we are frequently asked, and explain to readers exactly how to go about tracing their tank ancestors.”

”What makes tracing an ancestor’s military heritage so difficult is the terminology – which to the ordinary citizen is all but impenetrable. The difference between battalions, regiments, divisions and corps can be difficult for the casual researcher to unpick; and what can be even more confusing is the changing nomenclature of the tank arm along with the many regimental mechanisations and amalgamations that have taken place since World War One,” he added.

The new book promises to explain, clarify and demystify the subject for the ordinary family historian. It contains practical guidance and provides a flavour of what tank warfare was like in times past by including some stories and accounts from individuals – the kind of things that others tracing their family history have discovered

… I applaud Pen and Sword for collaborating with the Tank Museum. It makes sense, in ters of accessing unparalleled expertise, and also gaining access to an unrivalled collection of photographs. This book will be of interest to all military historians, not just in terms of family history – I can imagine it coming in handy when researching any tank-servicemen. It’s going to stay on my bookshelf that’s for sure

David Fletcher is the historian at the Tank Museum. He is one of the foremost experts on the history of British tanks and armoured vehicles. Among his many books are The British Tanks 1915-19, Tanks and Trenches: First Hand Accounts of Tank Warfare in the First World War and a series of studies of the key tanks of the two world wars

Janice Tait is the librarian at the Tank Museum, responsible for the archive. Having a keen interest family history research, Janice handles the many family history enquiries that arrive in the archive almost on a daily basis.