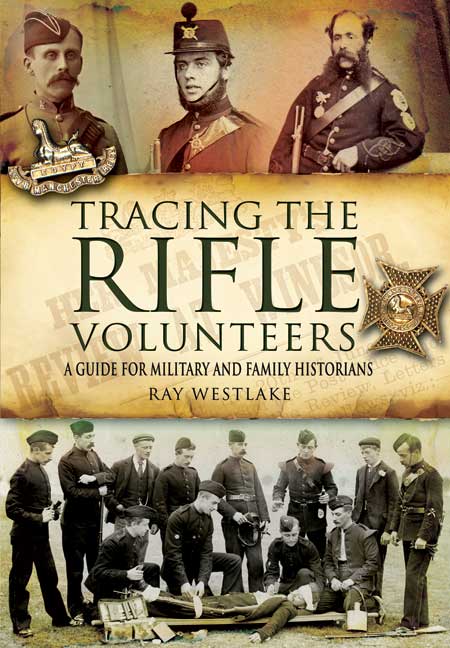 Family History Types of Records Ancestors in the Armed Forces

Click here for help on how to download our eBooks
Add to Basket
Add to Wishlist
You'll be £4.99 closer to your next £10.00 credit when you purchase Tracing the Rifle Volunteers. What's this?
Need a currency converter? Check XE.com for live rates

From 1859 to 1908 the Rifle Volunteers played an essential role in Britain’s national defence, yet their history has been sadly neglected. Little information is available on these dedicated, amateur soldiers who were recruited into the ranks of a military organization that flourished across the country. But now, in this invaluable book, Ray Westlake, a leading authority on the military history of Victorian and Edwardian Britain, provides a concise, accessible introduction to the Rifle Volunteers and a comprehensive directory of the units raised in each county and each town.

The main content of the book consists of the lists of units and companies across the country, with a brief history of each one. The key leading officers are names, as well as the backgrounds of the men who joined the Volunteers. Overall, the directory part of the book contains a massive amount of detailed information, on these part-time ‘amateur’ soldiers as the Government of the day saw them.
This volume provides an essential historical source of great value to any family historian with ancestors into eh Rifle Volunteers, as well as to military historians generally.

The latest military guide provides a detailed breakdown of the establishment and composition of every Rifle Volunteer corps established in England, Scotland and Wales following the movement's creation in 1859 and until its eventual demise when replaced by the Territorial Force in 1908.

The book begins with a brief introduction on the establishment of the movement, created following concerns raised by the Duke of Wellington that Britain was unprepared for civil defence. The book then breaks down which corps were raised on a county by county basis, with details of their establishment, and in some cases providing some useful social context, such as a particular corps which recruited heavily from local collieries, or areas where training took place etc.

The book is some 267 pages long, so it is a little disappointing that an actual guide for locating relevant records is a page only in length, nevertheless this book will be an indispensable guide for those with Rifle Volunteer ancestors.

The Volunteer units are listed by county, a manner which the majority of researchers will find the most convenient. Ray has tackled the often complex task of following the formation, progression and designation of the Corps very well.

This new book from military historian Ray Westlake is a comprehensive guide to the Rifle Volunteer Corps, forerunner of the Territorial Army. It provides the entire history of the Corps from 1859 to 1908, which played an essential role in Britain's national defence. It features detailed accounts of Rifle Volunteer units in each county and town and gives background information on the communities from which the men came.

Those of our ancestors who served in the military either as Regulars, Volunteers or Cadets did so in locally raised formations. This book gives us clues as to how locally formed units were variously amalgamated and disbanded. In particular, it gives the details of the way the Rifle Volunteers were organised between 1859 to 1908.
The Rifle Volunteers were the Infantry component of the volunteer army, the forerunners of the later 'Volunteer Force' from 1859 and in turn the Territorial Army.
For family historians, this work will provide a reference text for the unit formation history of the Volunteer Rifle Battalions, its principal characters, significant dates and actions in which they served. There are additional details covering uniforms and the background of the communities they were drawn from.
The book is usefully organised by county, with details of local companies formed in towns and villages from local men. For Lancastrians, Companies were formed from Lytham to Burnley, and Ulverston to Wigan. Cadet Battalions and Officer Training Corps (OTC) are also included. Many of the units described were the forerunners of instantly recognisable Infantry Battalions - The Kings Own (Royal Lancaster Regiment), The Kings (Liverpool Regiment), The Manchester Regiment, East Lancashire Regiment, and many more.
The book includes photographic plates and engravings of the period, and attempts to give a little of the historical context by relating the formations to significant events of the period. Reviewed by Mike Coyle

The Rifle Volunteers were a group of dedicated, amateur soldiers who played a vital role in Britain's national defence from 1859 to 1908. This book is the first to provide a history of these brave but sadly-neglected soldiers and is therefore an important and original work. Comprising an exhaustive directory of the units raised in each British county and town, we discover how this part-time army originated and how it performed as a vital support for the regular army. We also discover how the volunteers were recruited and trained as well as being given details of the equipment and weapons they used. Conveniently presented as a county-by-county account of the history of each unit, this book draws in the reader, bringing out a fascinating human-interest angle through painting in background information of the communities that the volunteers came from. Ray Westlake's invaluable and unique book is essential to anyone with an interest in military, British or family history.

The Rifle Volunteers were the infantry component of a large volunteer army that existed in Victorian England, Wales and Scotland, coming into existence in 1858 and surviving until the creation of the Territorial Force in 1908.

This refernce work provides brief histories of each of the hundreds of Volunteer Corps (mostly of company size) that existing for some or all of this period. Some counties produced a huge number of Corps - Middlesex reaching 50!

In each case we get details of the Corps's formation, eventual fate and any reorganisation that came in-between. In many cases we also get the names of the original officers or the person or formed the unit, as well as the location of the Corps' headquarters and the number of volunteers.

This will be a useful reference work for anyone studying the Victorian army, and it will also be of interest to the family historian who had discovered an ancestor who served in the Rifle Volunteers.

BY THE MID 1800s the general consensus of the Government in Great Britain was that the British mainland was secure from attack. Since victory at the Battle of Trafalgar the threat posed from Europe was almost nonexistent and current military campaigns were being fought on distant shores, negating the need for the formation of additional forces to defend the homeland.
In 1847, in a letter to Sir John Burgoyne, the Duke of Wellington expressed his concern at the situation, believing that the nation was resting on a false sense of security. He said It was time to make provisions for the defence of the country and to take precautions against invasion.'
At the time of the letter, only two voluntary infantry units were in existence: the Honourable Artillery Company and the Royal Victoria Rifles. After pressure, the government relented in its initial opposition to create a part-time army and on 12 May 1859 the War Office sanctioned the formation of Volunteer Corps throughout the country.
These amateur hard-working soldiers were recruited into locally based companies of between 60 and 100 effective men, officered by a captain, a lieutenant and an ensign.
Little information is available on these Volunteer Corps who, between 1859 and 1908, provided dedicated and vital support to the regular army.
Ray Westlake's Tracing The Rifle Volunteers aims to change this. The book offers a fascinating and in-depth insight into not only the history of these Volunteer Corps but also a comprehensive directory of all the units raised in each county and town of Great Britain.
The book is clearly divided into different sections, each with its own aims of giving the reader an easy introduction into the history of the Rifle Volunteers. It starts by telling the history behind the formation of the Volunteer Corps and how they were organized as well as covering the recruitment, training, equipment, weapons and drills.
The books main strength is the comprehensive county by county account of each unit. The key officers from each unit are identified as well as the trades and professions of the volunteers. Each unit is traced through the various reorganisations throughout the Rifle Volunteers’ history. The local background of the units is also highlighted, giving the reader a sense of the community from whence they came.
The book is an invaluable resource and is essential reading for anyone interested in this often neglected part of Britain’s military history.

The Rifle Volunteers were formed May 12, 1859 as a defence force of part-time citizen soldiers. Ray Westlake has done extensive research for his book and has produced a comprehensive history of all the units with details of recruitment, dress, training, weapons and drill. He has written a missing part of history.

In this invaluable book Ray Westlake, a leading authority on the military history of Victorian and Edwardian Britain, provides a concise, accessible introduction to the Rifle Volunteers and a comprehensive directory of the units raised in each country and each town.