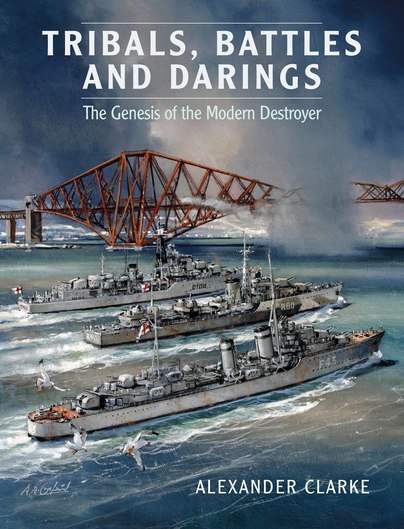 Add to Basket
Add to Wishlist
You'll be £21.00 closer to your next £10.00 credit when you purchase Tribals, Battles & Darings. What's this?
+£4.50 UK Delivery or free UK delivery if order is over £35
(click here for international delivery rates)

I found this a really interesting read, with not just the stories of the actions they were involved in, but the context of the period they were designed in, balancing capability with cost. Sound familiar? These were good looking ships that gave excellent service to the Royal Navy and I learnt a lot from reading this book.

A fitting tribute to the men and ships of the Royal Navy's elite destroyer forces from the 1930s to the 1960s - four mushroom heads, only missing out on five due to the esoteric nature of the subject.

The narrative flows and is most readable, the photographs, of high quality, are many and varied and the whole is supported by a set of notes and a very extensive bibliography.
A super read which we highly recommend.

This publication has been a pleasure to read for many differing reasons.

I served in the Royal Navy during the 1950s and 60s therefore most of the ships mention are known to me either due to them still being in commission and serving on the same station as my posting or due to their well know exploits during and after WWII.

However the book isn’t just a list of ships and their exploits. He tells of their reason for being, their commanding officers and crews, their victories and sad losses, their construction, armaments, refits and so much more. Their claim to fame is legion and many commanding officers went on to become senior officers at the Admiralty as it was known in those days. Probably the most famous WWII Destroyer is HMS Cossack who entered Norwegian waters to rescue captured British Seamen from the German ship Altmark. Other destroyers carried out many non-fighting functions during their commissions. For example, recuing injured civilians during the Spanish civil war, transporting Royalty from war torn Europe, entertaining foreign dignitaries and attempting to impress foreign powers who might be contemplating trouble that could adversely affect British interests. The classes of destroyers may not have been what some senior officers wanted during the Second World War but they certainly proved their worth. To have served on these ships was something to be proud of that, with the camaraderie generated, remains to this day, and is witnessed in the Royal Navy’s small ships.

On a personal note I was pleased to see a small paragraph which told of HMS Diana acting as escort to Britain’s last battleship HMS Vanguard. I was serving on the Vanguard at this time and my elder brother on the Diana.

"The book’s emphasis on the Tribals and their wartime exploits is an interesting read."

Previous books have covered the Tribals and Darings in great detail, but the Battles less so. But this is the first book to examine the thinking behind the development of the three classes, and how this was influenced by the perceived operational requirements in the future. The book achieves this by looking at how the RN needed to reduce costs but keep a sizeable fleet around the world that pushed it towards building ships that could cross boundaries between classes. This thinking produced the Tribals, which in theory could double up in some circumstances as small cruisers if required due to their heavy gun armament.

The book is lavishly illustrated with superb photographs, of which many have not been published before. The quality of reproduction is enhanced by the use of gloss paper. It is also extremely thoroughly referenced illustrating the many sources used by the author.

With numerous well captioned photographs and a fascinating and stimulating history that covers every aspect of these ships, this book is a real gem. It is far more than just a book listing technical details of the classes, this is a history of the design rationale and development of 3 ship classes of ships that were powerful and graceful – the ultimate destroyers of their day. A superb read for both the ship enthusiast and the naval historian. Very highly recommended.

This book is excellent - it is wonderfully written in a very engaging style that is full of energy.

The content quickly orientates one to the world the destroyers were created in to give context and then offers stories that give details as examples with the right balance of detail and brevity to appeal to the academic or amateur, expert or merely curious.

The book is a story of people and ships as living things, not a technical manual, and is all the better for that.