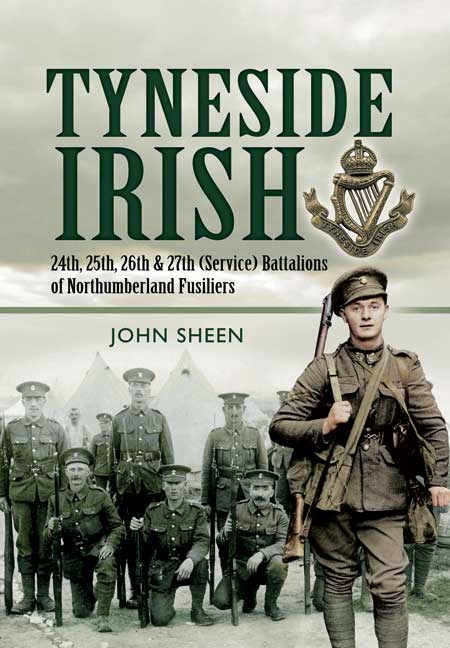 Click here for help on how to download our eBooks
Add to Basket
Add to Wishlist
You'll be £4.99 closer to your next £10.00 credit when you purchase Tyneside Irish. What's this?
Need a currency converter? Check XE.com for live rates

The 'Pals” battalions were a phenomenon of the Great War. Local communities raised (and initially often paid for) entire battalions for service on the Western Front. Their experience was all too frequently tragic, and they encountered the fury of battle on the Somme in July 1916. Yet their spirit and fighting qualities have gone down into history.
This is a comprehensive history of the Tyneside Irish Brigade raised in the North East. It covers their raising, training and active service as well as the aftermath of the war and how it affected their community.

John Sheen knows Durham and the north east well and has also co-authored a book on the Tyneside Scottish. This is a thoroughly researched tribute to the men of the 24th, 25th, 26th and 27th Northumberland Fusiliers which charts these battalions' evolution and formation through to active service and the all too familiar tale of young lives lost in the face of German machine guns and barbed wire. Profusely illustrated and benefiting from vignettes and portraits of many of the participants as well this book would be well worth the investment on this basis alone. That it also include seven extremely useful appendices listing gallantry awards and nominal rolls for all four battalions (and the 30th, Reserve, Battalion) is a fantastic added bonus. If your ancestor was an original member of these battalions he should be named here.

The Tyneside Irish Brigade was one of the 'Pals' Battalions formed under Lord Derby's scheme in response to Kitchener's famous call for a million volunteers. This battalion's history has been written by John Sheen, a local man dedicated to the military history of the North East. This comprehensive book covers the raising of the battalion, its training and active service as well as the aftermath of the war and how deeply the local community was affected.

'Pals' battalions, such as those of the Tyneside Irish Brigade, were a phenomenon of the Great War, never repeated since. This comprehensive history of the brigade is a lasting tribute to a group of men whose contribution to the war effort has been in danger of being lost.

This detailed and well-illustrated book includes a very useful and extensive nominal roll- a brilliant resource for family historians with well known connections to the Tyneside Irish.

Beautifully illustrated, clearly written and well-researched, this is a book that certainly deserves to be reissued.