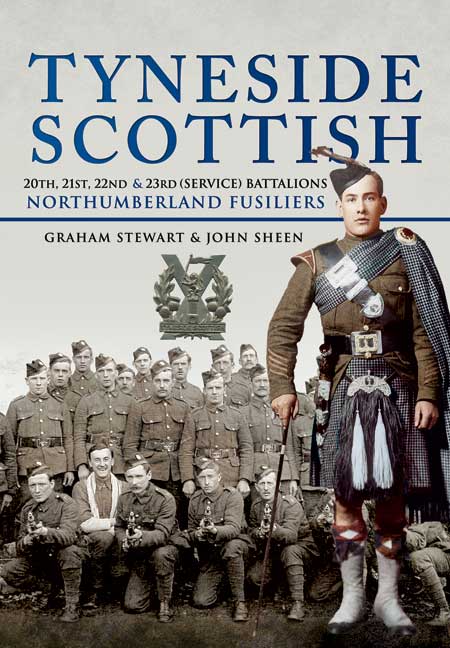 Click here for help on how to download our eBooks
Add to Basket
Add to Wishlist
Get Tyneside Scottish (Kindle) for FREE when you purchase 2 other eBooks.
Need a currency converter? Check XE.com for live rates

Although called the Tyneside Scottish, very few of the men who made up this Brigade were of Scottish descent. Many came from local villages or were from the Northumberland pits. They saw action at the Battle of the Somme and after it were allowed to put tartan behind their cap badges because of their bravery.

As featured in The Shields Gazette.

A detailed account of the Tyneside Scottish Brigade, formed in response to Kitchener's c all for a new army, made up of local men from around Newcastle, few of whom were Scots

This is a very interesting story, with many fine images through the text. ... This is a fine piece of research that will be enjoyed particularly by enthusiasts and those with family in or from Northumberland.

This remarkable product of much research includes lists of those who received gallantry awards and of officers and other ranks.
It is an informative book which will be of great help to anyone researching the Tyneside Scottish during WWI and which will also act as a keepsake for those who have a particular interest in the regiments.

As seen in The Shields Gazette.

The book tells the story of the formation and, in some cases, the decimation of the 20th, 21st, 22nd and 23rd Battalions of the Northumberland Fusiliers, better known simply as The Tyneside Scottish. The story is told, as is usual (and sensible) in this series in chronological order so that we get some background on the area the men came from, the recruiting, training and finally service overseas. There's a very interesting appendix on some of the physical defects encountered in the men on, or shortly after, attestation, and as with all the books in this series, the pages are well illustrated.

... This is a great book and an essential addition to those books, many of these published in recent years, which have brought Britain's volunteer army of 1914 back to life.