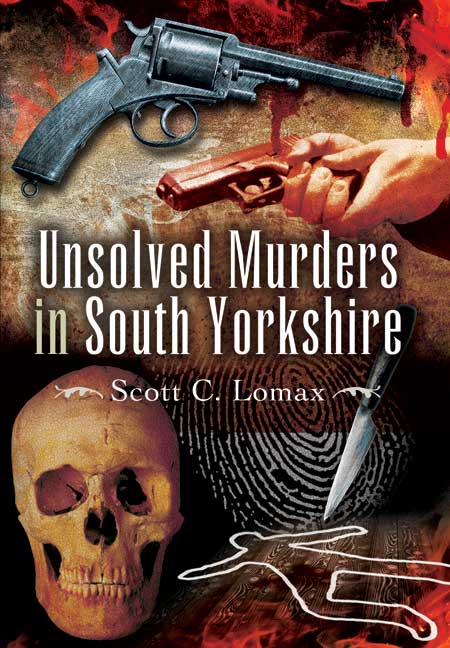 Click here for help on how to download our eBooks
Add to Basket
Add to Wishlist
You'll be £4.99 closer to your next £10.00 credit when you purchase Unsolved Murders in South Yorkshire. What's this?
Need a currency converter? Check XE.com for live rates

Whilst the passage of time can and has uncovered many secrets, killers could get away with their crimes in 1596 when Shakespeare penned these words and this is certainly the case in more recent times as Unsolved Murders in South Yorkshire clearly demonstrate.

The early chapters include cases of historic interest where killers certainly went to the grave in the knowledge they had got away with murder. Cases include suspicious deaths which left detectives in South Yorkshire baffled, but which were, it would seem, acts of callous murder which were not recognised as such due to dubious police opinions and practices. There are also cases of clear murder such as a man shot in the head during the Victorian period, whose killer was never identified.

The later chapters, however, feature more recent cold cases where there is still the possibility that the wicked men or women who were responsible for such acts of inhumanity may remain within our society.

Cases include a man murdered for less than £70 in a city centre multi storey car park, a teenage girl abducted, sexually assaulted and left dead on a dung hill, a young mother who entered prostitution and died at the hands of a man with more than sex on his mind, a pregnant woman who left home one day to go shopping but was found days later dead in a ditch with her throat cut and a disabled woman who was strangled in her home which was then set ablaze.

For some of these cases there is the chance that someone has information which, despite the passage of decades, could lead to one or more individuals standing trial for murder. Justice can still prevail.


The killer of young Rotherham girl Ann Dunwell escaped justice 50 years ago due to primitive police techniques, according to the author o a new book.

The disturbing case features in Unsolved Murders in South Yorkshire.

Unsolved crimes hold a fascination and with the advancement of technology and DNA, this is particularly true of the modern age.

Television has promoted our interest in factual crimes and fictional ones, so this book should appeal to many, particularly those people who live in South Yorkshire and indeed the whole county.

The author has taken 10 real-life cold cases of the 19th and 20th centuries and examined all the facts carefully leaving us to make our own conclusions.

The later chapters in this book are cold cases where there is still the possibility of catching the criminals involved. The text is written in an interesting manner that weighs up the possibilities of solution, while the author has provided many of the photographs himself. Perhaps this book will help to bring justice for the victims and families of some unsolved murders in South Yorkshire.

MURDERERS in Barnsley who were never brought to justice feature in a new book.

"For some of these cases there is the chance that someone has information,'' said its author. ''Despite decades passing, the later ones could lead to one or more individuals standing trial."

Early chapters include cases of historic interest where killers went to their graves knowing they had got away with murder.

Cases also include suspicious deaths which left detectives in South Yorkshire baffled, but which were, Scott says, acts of callous murder not recognised as such due to police opinions and practices in those days.

''By raising awareness of some of these awful crimes it is my hope that people may come forward with new information,'' Scott added.

Scott on the trial of brutal killers. They are murders most horrid, and most mysterious too.

Step forward, Scott C Lomax – architect by day, writer by night and seeker of truth and justice by his own appointment. He's just released a book, Unsolved Murders In South Yorkshire, charting the regions most notorious cold cases. And, while the blood, guts and police cock-ups come thick and fast, he hopes it will be more than just an interesting read for fans of true crime.

I enjoyed this book, it has old and more recent cases. The reports are detailed enough for interest but are not too long whereby they become dull. As I enjoy true crime and live in Yorkshire I knew a bit about most of the cases but not all of them. I can recommend this book.