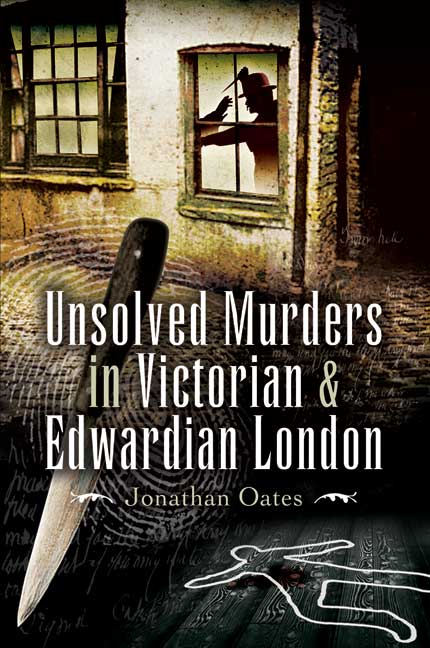 Add to Basket
Add to Wishlist
You'll be £12.99 closer to your next £10.00 credit when you purchase Unsolved Murders in Victorian & Edwardian London. What's this?
+£4.50 UK Delivery or free UK delivery if order is over £40
(click here for international delivery rates)

Unsolved crimes have a particular fascination, none more so than unsolved murders. The horror of the crime itself, the mystery surrounding it, the notion of a killer on the loose, the insight into primitive police work, the chance to speculate about the identity of the killer after so many years have passed – all these aspects of unsolved murder cases make them compelling reading. For this collection Jonathan Oates has selected over 20 varied and intriguing cases from the late 1830s to just before the Great War. Among them are the headless body found in a bag at Waterloo Bridge, the pregnant maid who was bludgeoned to death, the blackmailer whose corpse was discovered in the gutter, the shooting of the night watchman at the Cafè Royal, the barmaid whose corpse rode the train from Hounslow to Waterloo, the dead girl packed in a parcel, and the enigmatic case of Frances Coles, the Whitechapel prostitute who may have been Jack the Ripper's ultimate victim. Each of these case histories is recounted in precise, sometimes shocking detail. The inadequacy of the detection and forensic techniques employed over a century ago is revealed, as is the corrupt and brutal side of life in the Victorian city.

Given the limitation of too many cased and not enough detail this is a useful and interesting book for the general reader.

Oates, a local history librarian in London, describes the circumstances surrounding twenty-five unsolved murders committed in London between 1830 and the First World War. First published in 2007, the volume relies on police files, witness statements, physician statements, and press clippings to chart the course of the investigations and offer theories as to who may have been responsible. Early policing and forensics methods are discussed, as well as life in Victorian and Edwardian London. The work contains numerous historic photographs as well as a list of other unsolved London murders from the same time period. This work will appeal to fans of true crime and general readers interested in nineteenth century British police work.