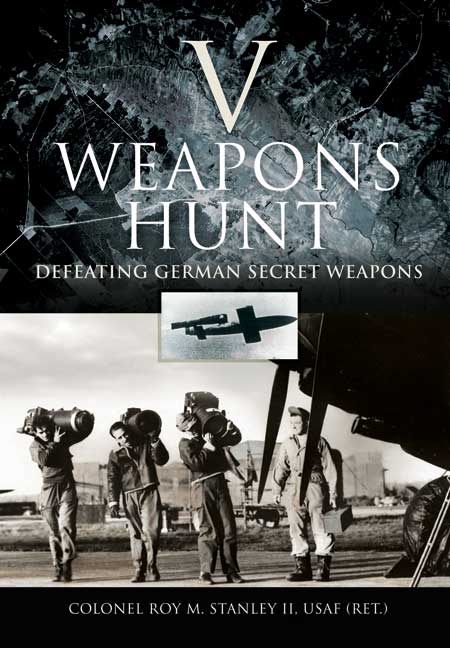 Click here for help on how to download our eBooks
Add to Basket
Add to Wishlist
You'll be £4.99 closer to your next £10.00 credit when you purchase V Weapons Hunt. What's this?
Need a currency converter? Check XE.com for live rates

The V-1 and much larger V-2 rockets added a terrifying extra dimension to the Second World War. Once launched there was little that could stop the V-1s and nothing to prevent the V-2s reaching their targets. Both were indiscriminate and struck with little or no warning. Their destructive power was awesome but it was their psychological impact on the defenceless civil population that posed such a threat to morale.

This remarkable book tells, through words and images, the story of the Allied discovery, understanding and campaign against the Vengeance weapons. Written by a trained intelligence analyst and aerial photo interpreter, the book picks out the air photographs that found the break-through in this vital campaign. The reader sees the first sighting of a V-1 flying bomb at the Peenemunde research facility, weapon launch sites, production facilities as well as the damage caused by Allied raids.

This is a scholarly and authoritative work which lifts the lid on how Allied intelligence provided the information to defeat this insidious threat before it caused not only massive destruction but the delay of the Normandy invasion.

This is an utterly fascinating look at the role that photographic reconnaissance, and in particular photographic interpretation, played in the hunt for German secret weapons, especially the V-1 and V-2. The author is a retired photo-interpreter himself, and his expertise frequently shows through (although he is also understandably biased in favour of the photo-interpreters when discussing any of the controversies that developed between P-Is and other figures about who found what first).

The book starts with a detailed explanation of the methods used by British and Allied photo-interpreters during the Second World War, and the equipment that was available to them. He then moves on to look at each aspect of the hunt, starting with the prolonged attempts to understand what was going in at Penemunde, then moving on to the second major development centre in Poland, and three chapters looking at the different types of launch sites set up for the V-Weapons, from the massive but ultimately futile concrete bunkers on the coast facing London, to the simple motorised launch equipment for the V-2. These chapters are copiously illustrated with the aerial photographs that were being used by the P-Is at the time, and a key strength of the book is Stanley's ability to use his own experience to explain what is visible on each picture.

Another key strength of the book is the care that the author had taken not to use hindsight in his judgements, but instead to look at what evidence was available to the P-Is when they were originally looking at the photographs. The result is a compelling and involving account of the process involved in turning raw photographic data into usable intelligence, and the use that was made of that intelligence once it had been gathered.

I have just bought your new book V Weapons Hunt. I am absolutely delighted that you have produced such an interesting and comprehensive account of the PI effort. I think that Constance would have been delighted by your work.

Colonel Roy Stanley USAF (retired) became an Aerial Photo Interpreter in 1959 and went on to assignments with the Defense Intelligence Agency, the Air Staff and in Japan, Thailand and Vietnam.

Now retired after 27 years service he lives near Fredericksburg, Virgina.