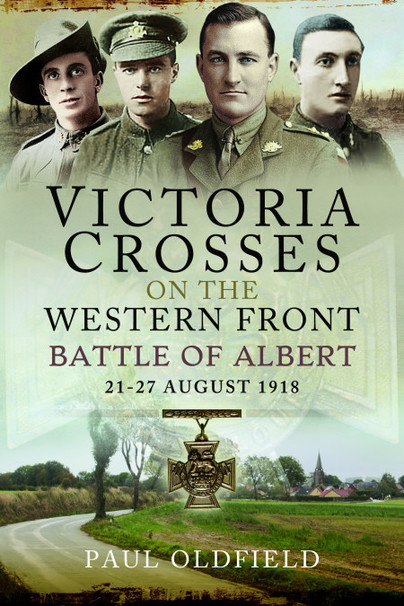 Victoria Crosses on the Western Front – Battle of Albert (Kindle)

Click here for help on how to download our eBooks
Add to Basket
Add to Wishlist
You'll be £4.99 closer to your next £10.00 credit when you purchase Victoria Crosses on the Western Front – Battle of Albert. What's this?
Need a currency converter? Check XE.com for live rates

Victoria Crosses on the Western Front: Battle of Albert, is designed for the battlefield visitor as much as the armchair reader. A thorough account of each VC action is set within the wider strategic and tactical context. Detailed sketch maps show the area today, together with the battle-lines and movements of the combatants. It will allow visitors to stand upon the spot, or very close to, where each VC was won. Photographs of the battle sites richly illustrate the accounts. There is also a comprehensive biography for each recipient, covering every aspect of their lives warts and all: parents and siblings, education, civilian employment, military career, wife and children, death and burial/commemoration. A host of other information, much of it published for the first time, reveals some fascinating characters, with numerous links to many famous people and events.

The stories give the reader so much about the kind of men who served and also obtained the Victoria Cross. It is a reminder that there is no ‘definition’ of a type of man that obtained the VC. What is continually clear from this, and all Paul Oldfield’s tremendous work, is that these men were just ordinary people who managed to do extraordinary things.

Paul Oldfield's new book on Western Front Victoria Crosses, and in particular those awarded at the Battle of Albert in 1918, is a testament to the bravery of the men who took part in the action, as well as a superb account of the various skirmishes and engagements for which the VCs were awarded. Essential reading for anyone contemplating a visit to a place where a loved one fought and died.

These books are fast becoming a favourite of mine, despite being surprised by the format before reading a previous copy. Let’s just say the format has grown on me. These books are great in that you get the story of the battle and the major incidents, you then get the story of the person beyond the award. It’s not just the basic info you could find elsewhere but it has the in depth story and the full story of the man who has won the award. Credit must go to the author Paul Oldfield, who writes a great book and who must have to do so much research for them. These books are really good and I would happily recommend them to anyone, they are so important so that these events and stories are not forgotten.

Paul Oldfield continues his thoughtful accounts of the men, the battle and the ground on which they won the Victoria Cross. The format is excellent and continues the author’s excellent work on the subject.