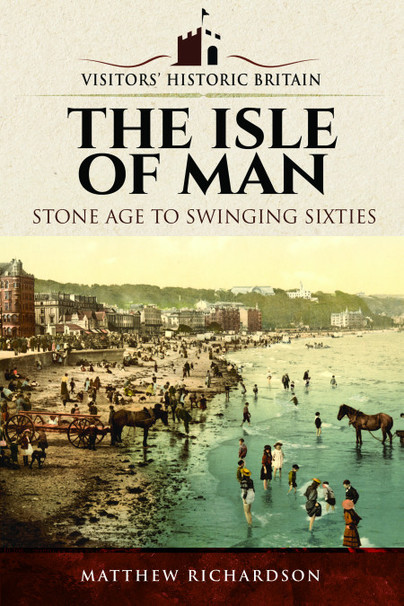 Click here for help on how to download our eBooks
Add to Basket
Add to Wishlist
You'll be £4.99 closer to your next £10.00 credit when you purchase Visitors' Historic Britain: The Isle of Man. What's this?
Need a currency converter? Check XE.com for live rates

The reader will perhaps be surprised to learn that the tiny Isle of Man, midway between the coasts of Lancashire and Northern Ireland, is one of the richest historic landscapes in Europe. Packed into its 225 square miles are dramatic stories of Bronze Age conflict, Viking warriors, Medieval kings, smugglers, maritime and railway history, wartime airfields and even a pirate radio station. Add to that the Island's unique motorsport heritage (on two, three and four wheels), and you have a combination unrivalled anywhere in the British Isles.

Whatever your passion, or whichever historical period appeals to you, the Isle of Man will have something fascinating to offer. Packed with illustrations, and using first-hand accounts to enhance the narrative, this book takes the reader on a chronological journey through the island's history, before offering a series of guided tours which pick up the highlights of each district.

From Bronze Age hill forts, to Medieval castles. From heritage railways, to historic quaysides. From award-winning museums, to country mansions, the Isle of Man has it all. Let this book be your guide to historic Britain's best-kept secret, as you explore a place untouched by the hectic pace of 21st century life, where heritage is, quite literally, to be found around every corner.

A great read especially if you love the Isle of Man.

Well researched and indexed. If you have been or intend to go to the Isle of Man this book is for you.

If you are planning a future trip to the Isle of Man, this publication has plenty of ideas to inspire your travels, and is well worth taking with you when you go.

A really good overview of the history of the isle of man in Britain. Full of information and facts you feel like you have been there when you finish the book.

I spent many many hours as a child on holiday in the Isle of Man and have nothing but wonderful memories of the place. I therefore jumped at the chance to read this book about probably my favourite place in the world.

This is a well researched and beautifully written treasure trove of information about the Isle of Man, presented and written in an engaging way, as far from a dry historic guide as you can get. I learned a multitude of new things about the Isle of Man, past and present, as well as being reminded of things I had forgotten and places that bring back such warm memories. For those intending to visit there are suggested tour routes plus contact info for various places to help you organise your stay.

Whether you have been to the Isle of Man before or hope to in the future, I heartily recommend this book which definitely provides great insight, both historic and useful, into the magical little island nestled in the Irish Sea.

Having family on the Isle of Man made this an insightful read and one I’ll come back to when I visit. Perfect for those with an interest in the island or history of GB in general.

I’ve just finished reading this excellent guide to the Isle of Man by Matthew Richardson, published by Pen & Sword. Richardson is a social historian and curator at the Manx Museum on the Isle of Man. Although he’s written several books, this is the first one I’ve had the opportunity to review. I’ve travelled to the island many times over the last twenty years and I love it. It’s got lots of history and, apart from TT fortnight, is uncrowded and very easy to get around. It’s a brilliant place for a long weekend, being far less than an hour’s flight from Liverpool or Manchester and not much more than that from London City or Gatwick.

The book is sub-titled “Stone Age to the Swinging Sixties” and the first two thirds of the book cover that history in chronological order. I expected it to be fairly dry and was very pleasantly surprised at how readable the book is. Although the history is covered fairly briskly, lots of interesting facts are tossed in. Did you know that Manx women were allowed to vote from 1881 onwards? It took the UK until 1918 to grant the same privilege.

We’re all aware of the “pits” used during Formula One races but how many people know these were originally the hollows at the side of the road on the IOM TT course?

The wonderful Amadeus Quartet was originally formed by internees on the IOM during WWII.

You think “anorak” was a term derived from trainspotting nerds? Wrong. It was used as a disparaging term for sightseers who came to look at Radio Caroline when it was moored in the Irish Sea in the 1960s.

The organ in St George’s Church, Douglas, was acquired from the Dublin Assembly Hall. It’s the organ upon which Handel conducted the first performance of the Messiah.

The last third of the book comprises four tour routes: a walking tour of Douglas and then three car routes from Douglas to Ramsey, Peel and Castletown. The next time I’m over on the island, I’ll persuade a friendly driver to take me the tours – and I’ll be taking this book with me, for sure.

The Isle of Man has always been a place that I want to visit so I was really keen to find out more about the history and the places to visit.

I found the book to be really informative and I really enjoyed it. I did like the images that were used in the book, but my only suggestion would be that there was a few more added as some of the chapters have quite a lot of text.

I enjoyed the way that the book was set out and the facts and detail added. The author has added in details of the sites (where possible) and the addresses/contact numbers so you can make your own arrangements. There are also four tours you can do in the book, one on foot and three by car to explore some of the different areas. There is a strong focus on the TT as you would expect and it was fun to go round the circuit with the author.

Very much a history book with the tourist in mind, this really hits the spot. Starting with prehistory, we see the Isle of Man's growth right up until the 1960s, in a natural chronological order, but in a manner that always nods us towards where we can go and see the places and remains mentioned, and at the perfect level of detail for the interested traveller. So this is neither one of the bitty, narrative-free guide books, nor is it a story of past times that fails to nudge us out of our armchair and get us to see the things mentioned. I could see many of the places I'd explored myself, from the Laxey Wheel to Cregneash, on these pages. We do also get routine travel writing, however – we've already had a virtual lap of the whole TT circuit across the island, but we close with extensive description of a walk round Douglas, and a few well-done day drives for the car hirer or ferry-user taking their own vehicle across. You might think them flawed for not getting us up the mountains at all, but we'll have already covered the railway networks necessary before then. A sterling success.

As with all books by Matthew Richardson this book is well written and researched, easy to read and accessible.