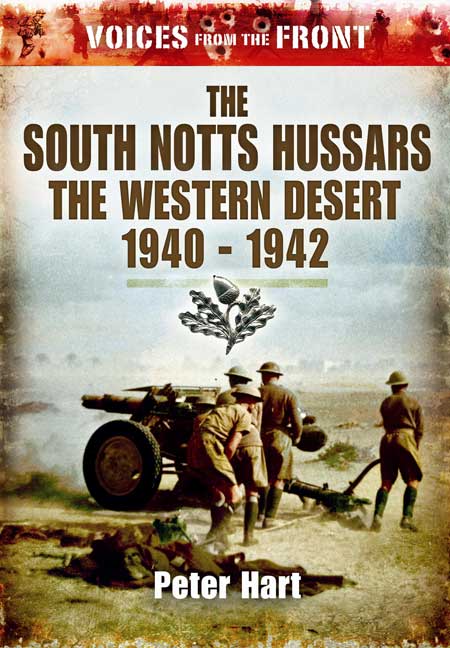 Click here for help on how to download our eBooks
Add to Basket
Add to Wishlist
You'll be £4.99 closer to your next £10.00 credit when you purchase Voices from the Front: The South Notts Hussars: The Western Desert, 1940 - 1942. What's this?
Need a currency converter? Check XE.com for live rates

The South Notts Hussars were the pride of Nottingham. A territorial artillery unit made up of a strange mixture of miners from Hucknall, the clerical classes working in Nottingham and some of the richest families in Nottinghamshire. They went to war as a widely disparate group. Their service in North Africa was dramatic in the extreme. Trapped in Tobruk for six months their 25-pounder guns helped keep Rommel's panzers at bay. By the time they moved forward to take up their positions at Knightsbridge in the Gazala Lines in the Spring of 1942 they had been welded into a real band of brothers proud of their proven fighting ability. Caught without infantry or tank support in the Cauldron they were ordered to fight to the last round. This is their story.

This is a superb book about a Yeomanry Regiment going off to World War 2. It is a ‘Voices from the Front’ book, in paperback format with a lot of photographs throughout. The book is expertly brought together by Peter Hart, Oral Historian at the Imperial War Museum, and the story is told using the words of those that were there.

The South Notts Hussars (SNH) had been raised in 1794 to defend the county following the rise of the French Revolution and the thought that it may spread to England. The Regiment was raised from Gentlemen and Yeomen of the County, and this is something that continued, especially in the selection of its officers. As Yeomanry they were in effect mounted infantry and remained in that role in one form or another until after World War 1 when, following the restructuring of the army and TA they became an Artillery unit but were permitted to retain their regimental title. Hart gives a very good description of the equipment and training that the SNH undertook to re-trade as gunners in the 1920’s/30’s.


The book is really their story told in three parts: forming for war in September 1939 and the phony period following that declaration; early war in the Western Desert leading to being sent to Tobruck to hold the town behind Axis lines to be a thorn in Rommel’s side – The Rats of Tobruck; and lastly the Battle of The Cauldron where the Regiment were told to fight to the last man/round until they were overrun.

Peter Hart has expertly brought together the life and death of an artillery unit in WW2, using the voices of the participants rather than the dry historical facts. Battles may have been fought over huge areas of North Africa, but this story is about the ones fought by this Unit. It is an excellent book which would be of interest of Gunners, anyone with an interest in the war in the Western Desert and WW2 in general. It is a great compliment to the men who served in this proud Yeomanry Regiment.

For me the VOICES FROM THE FRONT series is the one that really brings home the horrors of war. I suppose it's the equivalent of Jeremy Bowen talking to and interviewing the combatants in the Libyan desert right now on BBC TV. Only back then we didn't have the instant communications or the means to record first-hand the experiences of the people involved, although reading what those men had to say about what they were facing is still both poignant and harrowing.