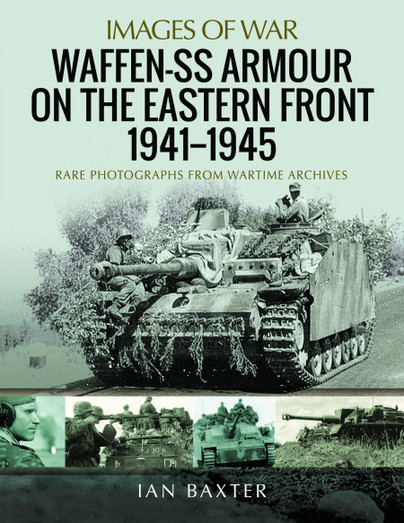 Click here for help on how to download our eBooks
Add to Basket
Add to Wishlist
You'll be £6.98 closer to your next £10.00 credit when you purchase Waffen-SS Armour on the Eastern Front 1941–1945. What's this?
Need a currency converter? Check XE.com for live rates

Hitler’s invasion of the Soviet Union, codename Operation Barbarossa, was arguably the pivotal moment of the Second World War. Initially the onslaught was staggeringly successful with, as the superb contemporary images in this book show, Waffen- SS armoured divisions leading the charge. But the Nazis had underestimated the Russians’ determination to defend their homeland and the logistical problems compounded by the extreme winter weather conditions.

After early victories such as the recapture of Kharkov in early 1943 and the Kursk offensive, commanders and crews of armoured vehicles such as Pz.Kpfw.I, II, III, IV, Panther, Tiger, King Tiger, assault and self-propelled guns had to adapt their tactics and equipment to what became a desperate defensive withdrawal eventually back across a scarred and devastated Eastern Front. Even during the last months of the war as the Panzers withdrew through Poland and into the Reich, these exhausted elite units, broken down into small battle groups or Kampfgruppen, fought to the bitter end.

With authoritative text supported by a plethora of rare fully captioned photographs, this classic Images of War book informs and inspires the reader revealing the key role played by Waffen-SS Panzer units in this most bitter campaign.

Another fantastic book and as you know already I would happily recommend all these Images of War books. I should also add there are always great appendices in the back of these books, which probably often get overlooked.

"The book is affordable and has some new photos."

This is an excellent book, for those wishing to learn more about the Eastern Front and see the German armour that was in use at the time.

The pictures are excellent references and show a great variety in their selection, and plenty of detail for modellers and inspiration for potential dioramas.