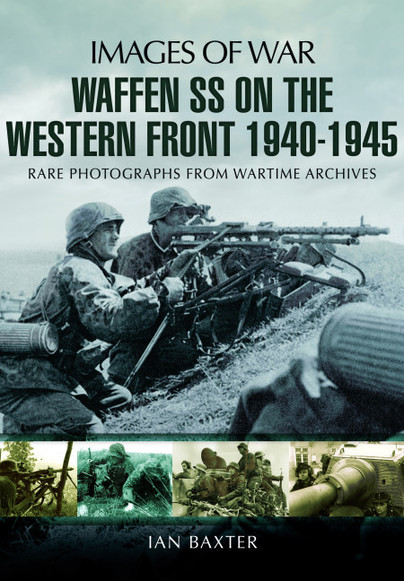 Click here for help on how to download our eBooks
Add to Basket
Add to Wishlist
You'll be £4.99 closer to your next £10.00 credit when you purchase Waffen SS on the Western Front. What's this?
Need a currency converter? Check XE.com for live rates

This book in the popular Images of War series covers the deeds of the Waffen-SS on the Western Front during the Second World War. With extensive text and in-depth captions with many rare and unpublished photographs it describes the fighting tactics, the uniforms, the battles and the different elements that went into making the Waffen-SS such an elite fighting unit.

It traces how the Waffen-SS carefully built up their assault forces utilising all available reserves and resources into a ruthlessly effective killing machine. It depicts how this awesome military formation grew to be used in offensive and then in defensive battles, and provides much historical information and facts about the weapons and all the components that fought on Western Front. The reader learns how the Waffen-SS battled their way through the Low Countries and the Balkans. After D-Day they played a key role in Normandy and fought at Arnhem, in the Ardennes and shifted from one disintegrating part of the front to another in a drastic attempt to stabilise the crumbling war effort.

The Waffen-SS on the Western Front 1940 – 1945 provides an excellent insight into one of the most effective fighting formations in military history.

The good photographs are worth studying and the captions are well written and informative.

This book provides a very graphic presentation of an elite force from its participation in the Blitz on the Low Countries and France, to the battles in Normandy after the D-Day Landings and the fighting retreat into Germany. Text and extended captions ably support a fine photo selection.