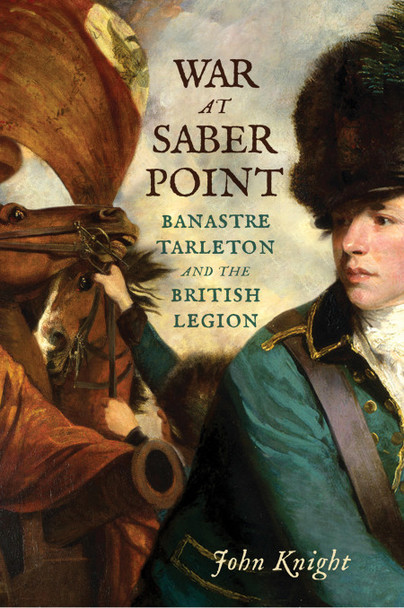 Banastre Tarleton and the British Legion

Add to Basket
Add to Wishlist
You'll be £25.00 closer to your next £10.00 credit when you purchase War at Saber Point. What's this?
+£4.50 UK Delivery or free UK delivery if order is over £35
(click here for international delivery rates)

The British Legion was one of the most remarkable regiments, not only of the American Revolution, but of any war. A corps made up of American Loyalists, it saw its first action in New York and then engaged in almost every key battle in the Southern colonies. Led by a twenty-four-year old libertine who purchased his commission to escape enormous gambling debts, the Legion gained notoriety for its hard-hitting tactics. Excelling in “special operations,” they frequently overwhelmed the Continental forces they fought, becoming the most feared British regiment of the war.

Banastre Tarleton and the Americans he led have always been characterized as brutal, immoral villains—most recently in the movie, The Patriot. But this study subverts our pre-conceived notions of patriotism during the American Revolution. The men who filled the Legion’s ranks were not weak-willed collaborators or treacherous renegades, but free men as motivated by conscience as the Patriots they battled. Few were wealthy. None had a vested stake in the British Government. Each believed that in defending the Crown, they were upholding the rule of law and preserving individual liberty.

These men followed Banastre Tarleton clear across America for years, sacrificing not only their families and homes but, in many instances, their lives. Self-interest could not have persuaded them to do this. Patriotism and fidelity did. Relying on first-hand accounts—letters, diaries, and journals—War at Saber Point: Banastre Tarleton and the British Legion is the enthralling story of those forgotten Americans and the young Englishman who led them.

JOHN KNIGHT earned a joint honors degree in American History and Politics from Warwick University. He was a fine-art appraiser for a number of London-based auction houses including Christie’s and Bonhams before taking up writing and lecturing full-time. A regular contributor to the Journal of the American Revolution, he splits his time between homes in Nottingham, England, and Dutchess County, New York.