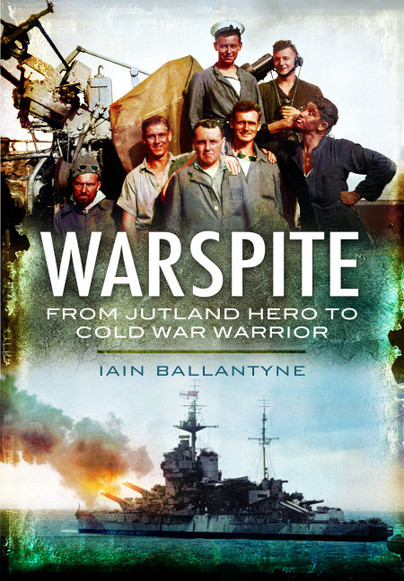 Click here for help on how to download our eBooks
Add to Basket
Add to Wishlist
You'll be £4.99 closer to your next £10.00 credit when you purchase Warspite. What's this?
Need a currency converter? Check XE.com for live rates

No warship name in British naval history has more battle honours than Warspite. While this book looks at the lives of all eight vessels to bear the name (between 1596 and the 1990s), it concentrates on the truly epic story of the seventh vessel, a super-dreadnought battleship, conceived as the ultimate answer to German naval power, during the arms race that helped cause WW1. Warspite fought off the entire German fleet at Jutland, survived a mutiny between the wars and then covered herself in glory in action from the Arctic to the Indian Ocean during WW2.

She was the flagship of Admiral Sir John Cunningham when he mastered the Italian Navy in the Mediterranean, her guns inflicting devastating damage on the enemy at Calabria in 1940 and Matapan in 1941. She narrowly avoided destruction by the Japanese carrier force that devastated Pearl Harbor. She provided crucial fire support for Allied landings in Sicily, Italy, Normandy and Walcheren. A lucky ship in battle, she survived dive-bombers off Crete and glider bomb hits off Salerno.

The 'Spite' had a reputation for being obtuse at unexpected moments, running aground and losing her steering several times; she broke free from her towropes on the way to the breakers and ending up beached at St Michael's Mount where it took a decade to dismantle her. She had fought to the end.

But this is not just the story of a warship. Wherever possible the voices of those men who fought aboard her speak directly to the reader about their experiences. The Warspite is also the story of a great naval nation which constructed her as the ultimate symbol of its imperial power and then scrapped her when the sun set on that empire.

Iain Ballantyne is a much published naval author. His books for Pen and Sword include Warspite, London and Victory in the Famous Ships of the British Navy series as well as Strike From the Sea. He is editor of Warships International.

As featured in Warships IFR Magazine.

This is a new edition of Iain Ballantyne's book on Warspite, first published in 2001 from his excellent, classic collection of famous ships of the Royal Navy. It is packed with many splendid illustrations, including quite a few specially commissioned paintings, unfortunately all in black and white, but that helps keep the price down to an affordable level. It i a slight distraction to cover more than one ship of the same name in one book but in this case the nuclear submarine Warspite (eigth to bear the name) forms a fitting short Epilogue. The book concentrates on the dramatic career of the Queen Elizabeth class super dreadnought, which fought with such distinction throughout two World Wars before being lost in a storm on the rocks off the Cornish coast. This famous battleship achieved so much in her life that she represented excellent value for money for the UK taxpayer. She fought at Jutland, as part of the Fifth Battle Squadron; she was at the Battle of Narvick and played a vital role in the decisive Mediterranean Campaign, annihilating three Italian heavy cruisers at the Battle of Matapan. It is a great story, strongly recommended.

This is a very successful work, combining a clear narrative with a good use of some very atmospheric first-hand accounts (as well as a large collection of photographs.

First published in 2001, here is a book that is more than deserving of a reprint. Its subtitle, From Jutland Hero to Cold War Warrior, neatly sums up the story of one of the best known and best loved British battleships of the last century...

There have been many different vessels by the name of Warspite from the first sailed by Sir Walter Raleigh to the last a nuclear submarine utilised in both the Cold War and the Falklands. However this book immortalises the seventh naval vessel to bear the name Warspite and according to history, fully lives up to her name. From Jutland Hero to Cold War Warrior follows Warspite from her early beginnings as a super dreadnought to her tragic end at Prussia Cove.With a beautiful selection of images and detailed maps, Iain Ballantyne's words tell the story with an enthusiasm and sentimentality that encourages the reader to continue reading page after page.

This book provides us with an amazing and fascinating history of the sixth Warspite.