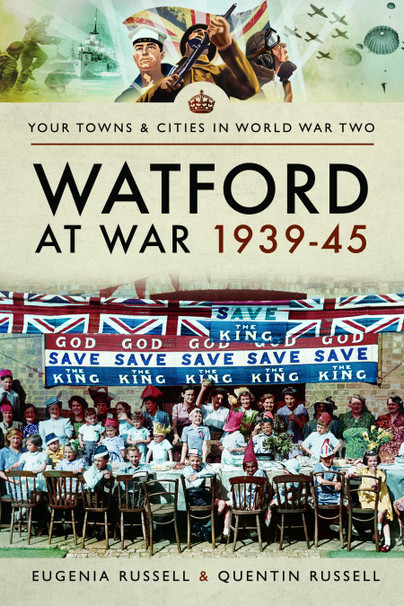 Click here for help on how to download our eBooks
Add to Basket
Add to Wishlist
You'll be £4.99 closer to your next £10.00 credit when you purchase Watford at War 1939–45. What's this?
Need a currency converter? Check XE.com for live rates

On the eve of the Second World War, Watford was a growing centre for light industry with close connections to London. These two facts would play an important role in how the ensuing conflict impacted on the lives of the people of the town and its neighbours in South-west Hertfordshire. This book puts into context local experiences by exploring how the dangers and sacrifices of war became everyday reality, and how the people responded through their involvement in the war effort as servicemen and women and as civilians.

The Second World War was total war. Every aspect of everyday life was a contribution to the war effort and every individual, from small children, to women and the elderly, joined those in active military service in propelling the nation to victory. The thorough exploration in this book of both civilian and military life in the area surrounding Watford brings the reader closer to the experiences of the local population during this time of unprecedented challenges. It is a reflection of the uniqueness of this war in being pervasive on everything individuals and communities engaged with.

Local regiments, the Home Guard, women volunteers, the involvement of schools and hospitals, evacuees, conscientious objectors, spies and prisoners of war, all come alive in these pages and tell the story of a town determined to make the most of life and contribute to the common good during the war years. Illustrated with archival and modern photographs, Watford at War 1939-45 is a fascinating read for everyone interested in the social history of the area, as well as readers looking specifically for material on the history of the Second World War at home.

As featured in: Recommended Reading

Article: 'Husband and wife write book on Watford at War' as featured by

Article: 'Husband and wife team from Bushey write history book about Watford during World War II' as featured by