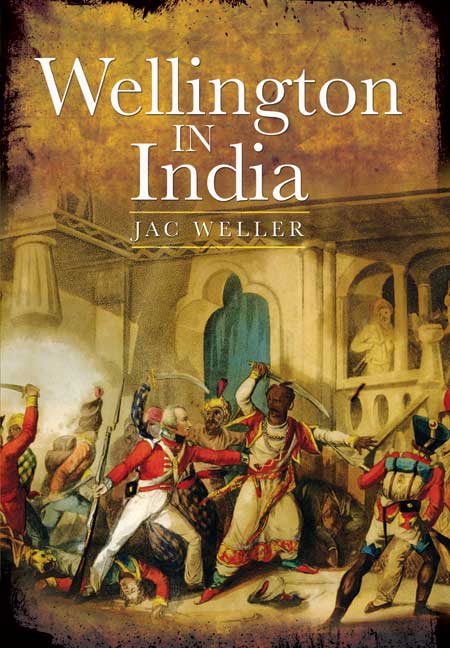 Add to Basket
Add to Wishlist
You'll be £13.29 closer to your next £10.00 credit when you purchase Wellington in India. What's this?
+£4.50 UK Delivery or free UK delivery if order is over £35
(click here for international delivery rates)

The third book in Jac Weller's trilogy concerns the period before the future Duke of Wellington faced Napoleon's armies, but during which he earned his spurs as a military commander. It was in India that he gained his experience of strategy and tactics which he would put to masterly effect against his most formidable opponent in years to come. Jac Weller gives a complete account of Wellington's career in India, the battles and sieges he undertook and the lessons he learned that prepared him for the campaigns he would later fight against the best European armies. In his characteristic clear and readable style, Weller explores the first major steps in Wellesley's career, steps that provided him with the experience to deal so expertly with the problems facing him when the future of Britain and the whole of Europe lay within his hands. Wellesley's triumphs in India set him on the road that would eventually lead to Napoleon's defeat at Waterloo.

Jac Weller was a distinguished military historian, and an expert on weaponry. Wellington In India is part of his famous trilogy on the Duke, together with Wellington at Waterloo and Wellington in the Peninsula

Listed in 'Further Reading' part of Siege of Seringapatam article

The author of this account, the late John 'Jac' Weller (1913-94), first won renown as an American football player for Princeton University in the mid-1930s. After graduating he went into business. At the same time he pursued his life-long interest in firearms and military history. His publications include Weapons and Tactics: Hastings to Berlin and a trilogy on Arthur Wellesley: Wellington in the Peninsula, 1808-1818, Wellington at Waterloo and finally this volume on his earlier campaigns in India. It is a mark of its readability that Wellington in India has been reprinted three times, most recently by Pen & Sword.
For the benefit of the armchair military enthusiast he included nearly fifty black-and-white photographs of sites, fortifications and weaponry. In addition he supported the text with helpful maps and informative appendices on such topics as ordnance and British military organisation and tactics.