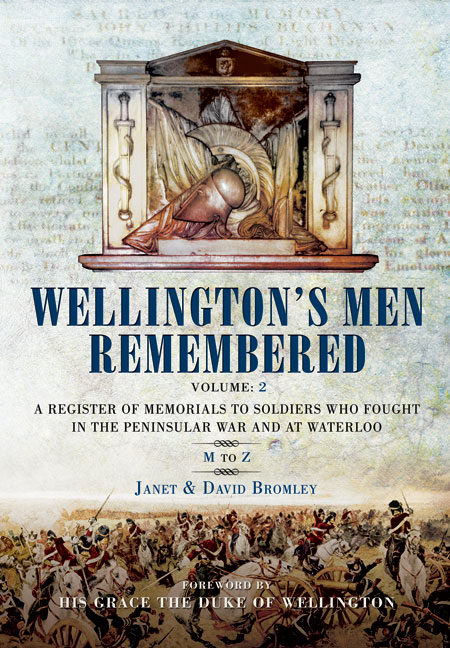 A Register of Memorials to Soldiers who Fought in the Peninsular War and at Waterloo - Vol II: M to Z

Click here for help on how to download our eBooks
Add to Basket
Add to Wishlist
You'll be £4.99 closer to your next £10.00 credit when you purchase Wellington's Men Remembered Vol. 2. What's this?
Need a currency converter? Check XE.com for live rates

Wellington's Men Remembered is a reference work which has been compiled on behalf of The Waterloo Association and contains over 3,000 memorials to soldiers who fought in the Peninsular War and at Waterloo between 1808 and 1815, together with 150 battlefield and regimental memorials in 24 countries worldwide.

An invaluable source for researchers and sumptuously illustrated with images of the memorials.

The two volumes contain 3,200 memorials to British and allied veterans who faught i the Peninsular war and at Waterloo 1808-1815 together with regimental and battlefield memorials. It will be of special interest to military historians and genealogists.

The project was initiated and supported by the Waterloo Association, and has been assisted by no fewer than 450 members.


The second volume of the dictionary listing the tombs and monuments (over 1350 for both volumes) and British military allies who served in the Iberian Peninsula and Waterloo. A useful complement to the Napoleon Guide. It is enriched with photographs of many of the monuments cited. A meticulous search of work and passion that will delight all fans.

This book has a clear objective, but will appeal to a potentially large additional readership for many different reasons. It is a work of scholarship and has been almost a lifetime's endeavour by the authors, continuing on into their retirement. It follows on from Volume I, covering M to Z. It is a heft volume and the cover price if not unreasonable for such a work.
Had the authors confine their efforts to just recordings to a list of names, together with the units that they served during the Peninsular War and/or Battle of Waterloo, it would have been a magnificent effort and of great value to historians, enthusiasts and the descendants of those recorded. However, they have done so much more. WE must salute the authors and appreciate the publisher. Strongly recommended.

Wellington's Men Remembered is a superb reference book and is worth every penny!