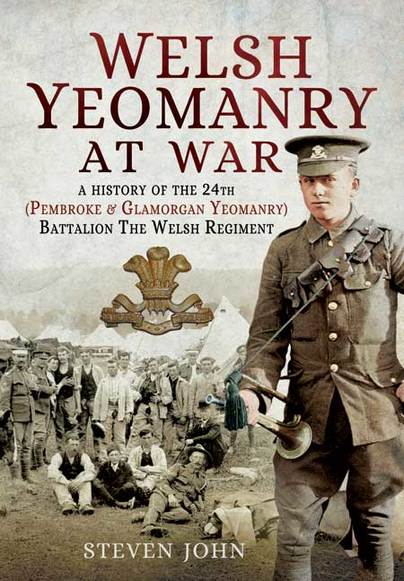 Click here for help on how to download our eBooks
Add to Basket
Add to Wishlist
You'll be £4.99 closer to your next £10.00 credit when you purchase Welsh Yeomanry at War. What's this?
Need a currency converter? Check XE.com for live rates

Soon after the outbreak of the Great War, following many years of part-time soldiering as cavalry troops on home defence duties, the members of various British Yeomanry regiments were asked to volunteer for overseas service. In 1916, officered by well-known members of the landed gentry, two of the Welsh Yeomanry regiments, the Pembroke Yeomanry and the Glamorgan Yeomanry, were amongst many who embarked for foreign service for the first time ever in their history. Spending the next twelve months in Egypt during the campaign against the Senussi tribesmen, the two regiments merged to form the 24th (Pembroke and Glamorgan Yeomanry) Battalion, Welsh Regiment, which joined the 74th (Yeomanry) Division to take part in the historic offensive into Palestine that ultimately led to the liberation of the Holy City of Jerusalem after 400 years of Ottoman rule. In May 1918, after two years of hard campaigning in the Palestinian deserts, the 24th Welsh embarked for France with the rest of the 74th Division, joining the Allied forces in the victorious 100-day offensive against the Germans.

Welsh Yeomanry at War sheds new light on the battalion's almost forgotten campaign in Palestine, which saw many of its troops killed and buried in the Holy Land, and also tells the enthralling story of its short but arduous period in France.

A fitting tribute to John's great-uncle and his comrades, who wen through so much, a hundred years ago.
Those interested in the history of Welsh soldiers in the war will find material here to enlighten them.

Steven's account of a mainly forgotten campaign from the first world war sees two Welsh regiments in their attempt to liberate Palestine from Ottoman rule, and then it was off to France during the final months of the conflict in Europe. A fascinating and enthralling account of their contribution to two quite separate conflicts.

Excellent history detailing the war of the 24th Battalion, The Welsh Regiment, the Pembroke and Glamorgan Yeomanry units which embarked for foreign service in 1916. They served for twelve months in Egypt during the campaign against the Senussi tribesmen, before merging to form the 24th Battalion and taking part in the Palestine offensive which led to the liberation of Jerusalem. In May 1918 the battalion embarked for France. This is a well written, concise and first-class unit history.

A fine and detailed account of the origins and life span of the Yeomanry makes for a very interesting reading for an area of the British Isles not often exposed to public focus.

A Journal written to fulfil interests for the military historian wishing to research battlefield detail and the logistics of movement of men and materials.

Overall, a book which will be useful to anybody and everybody with a love of the part of Wales.

For anyone with an interest in this particular unit this will be essential reading. There is a roll call of regimental dead, potted biographies of officers, and details of honours and awards. This, in addition to the main narrative, follows the well-worn pattern of regimental histories published in the 1920s and 30s. In addition though, and as exemplified here, today's historian has access to far more resources: newspapers, personal archives, service records published online by Ancestry and Findympast, not to mention the willing assistance of archivists and others. In this particular case that all comes together very well in this long overdue history of the 24th Welsh Regiment.

Steven John's new book 'Welsh Yeomanry at War: the History of the 24th Battalion, The Welsh Regiment', focuses on a largely neglected war, fought in Palestine's bleak deserts and places which still have a familiar ring today such as Gaza, Alamein; Hebron and Suez. While 'Lawrence of Arabia' led his camel mounted Arab army against the Turks: the '24th Welsh' faced soldiers from Turkey, Germany and Austria. They marched, built roads, dug trenches and fought hand to hand in fights were the bayonet was king. In March 1918 Battalion was withdrawn and transferred to Flanders in France were they were needed to replace the terrible losses suffered by British Army.

The majority of the 225 who were killed, died in France. This well indexed work containing personal stories also lists those who died but fatal casualties lists in any war are often the tip of the battle casualties.