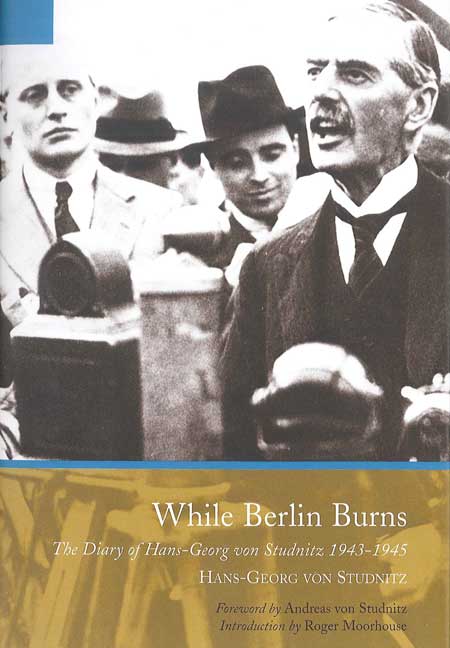 The Memoirs of Hans-Georg von Studnitz

Click here for help on how to download our eBooks
Add to Basket
Add to Wishlist
You'll be £4.99 closer to your next £10.00 credit when you purchase While Berlin Burns. What's this?
Need a currency converter? Check XE.com for live rates

Hans-Georg von Studnitz held a senior post in the German Foreign Office Press and Information Section in Berlin throughout the war. He also edited the official German Diplomatic,Correspondence, gaining a unique insight into events in Europe through his frequent contact with foreign diplomats and travels to France and Spain. His diaries chronicle the key events of the war from 1943-5 and are a fascinating exposé of the state of the German and foreign press during the war. The potentially provocative nature of his diaries meant that his secretary had to hide them every night in the office safe.

Von Studnitz's diaries describe vividly the bombing raids on Berlin and the terrible devastation and loss of life they incurred. Taking us on a tour of the ruins of the bombed out city, he describes the dignity and calm of Berliners in the face of disaster.

He also paints a sparkling portrait of the international set which he frequented. His diaries evoke a bygone era of diplomatic life and provide fascinating accounts of his meetings with key personalities such as the dashing Count Ciano, doomed Italian Minister of Foreign Affairs. As an insight into the life of a prominent figure of the German establishment during the war and an eyewitness account of the Battle of Berlin, von Studnitz's diaries are a rare and fascinating resource for the student and enthusiast

Well-written and engaging, the diary can also be read on several different levels, yielding as it does interesting information about issues ranging from Italo-German relations and the efficacy of propaganda devised by the British Political Warfare Executive, to the nature of Black Market trading in the Austrian and German capitals. An indispensable primary source.

Reviewed by Stephanie A. Jefford

Few Germans were in as good a position to watch, and describe, the collapse of the Nazi regime at the end of the war as Hans-Georg von Studnitz. While Berlin Burns is one of the best books I have read for some time.