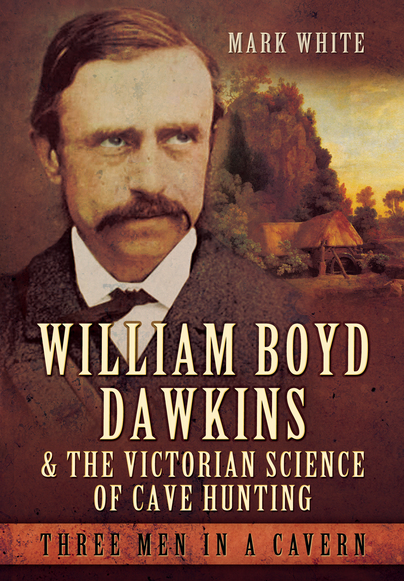 Three Men in a Cavern

Click here for help on how to download our eBooks
Add to Basket
Add to Wishlist
You'll be £4.99 closer to your next £10.00 credit when you purchase William Boyd Dawkins and the Victorian Science of Cave Hunting. What's this?
Need a currency converter? Check XE.com for live rates

William Boyd Dawkins was a controversial Victorian geologist, palaeontologist and archaeologist who has divided opinion as either a hero or villain. For some, he was a pioneer of Darwinian science as a member of the Lubbock-Evans network, while for others he was little more than a reckless vandal who destroyed irreplaceable evidence and left precious little for future generations to assess.

In this volume, Professor Mark White provides an unbiased archaeological and geological account of Boyd Dawkins’ career and legacy by drawing on almost twenty years of research as well as his archive of published and unpublished work which places him at the centre of Victorian Darwinian science and society. White examines his work in both the field and study to provide a critical yet balanced account of his achievements and standing in relation to the field today as well as among his peers.
At the heart of this book is a detailed study of the circumstances surrounding the Victorian excavations at Creswell Crags, where two celebrated finds became a cause celebre.

In Inventing the cave man: From Darwin to the Flintstones, Andrew Horrall provides an
exceptionally well-researched and thoroughly entertaining account of the ways in which the Victorians constructed the character of the cave man, which he defines as “a creature that fancifully incorporates palaeontological evidence, Classical depictions of hideclad, club-swinging wild men and broader Western artistic visions of the ancient past”. The word “fanciful” is of key importance here, for it denotes the cave man’s membership in the realm of popular culture rather than in that of science. Horrall argues that the cave man is a figure who served—and continues to serve—as a comical reflection of a nation’s culture and identity.

An exciting and stunningly detailed account of an important Victorian scientist who had hitherto received too little critical attention.

Overall, this book is well-researched and well-written. It is a detective story dealing with a series of interesting characters dominated by Boyd Dawkins and which, through the pen-portraits presented, generates different degrees of sympathy and annoyance in the reader. This book is an essential read for any researcher who is working on a site in which Boyd Dawkins has had a hand. It leaves the reader in little doubt that care and caution are required when using or referencing his publications.

This well researched telling of Dawson's career throws new light, with good illustrations, on the early struggle to understand ice age times, and in particular the important site at Creswell.

I found this an absolutely fascinating book. Mark White gives a comprehensive
account of the academic life and geological activities of one of the
most intriguing characters of 19th century Britain, as well as an insight
into the origins of Manchester Museum.
If you have an interest in early geology or archaeology, at £25, this
book is a bargain.

Prof Mark White unearths Boyd Dawkins’s life in great detail (except for his last years when he became an economic geologist of some note and worth, involved in the exploitation of the Kent Coalfield and the Victorian attempt at a Channel Tunnel) in a straightforward and neutral style, but makes the story, the man, Manchester and the intellectual times totally compelling. This is non-fiction ‘faction’ at its best.

This book is not always the easiest of reading, but it makes a significant and worthwhile contribution to our knowledge.

The author, Prof. Mark White hails from Durham University and has come to greatly appreciate Boyd Dawkins work. He has clearly had a great deal of material to trawl through in order to bring this book to a wider audience.

The book is copiously illustrated by modern and contemporary black and white photographs and lined drawings, which together illuminate the text and bring to life these very exciting Victorian escapades. It's almost as if these 'three men in a cavern' were like children out for their first bicycle ride! You'll enjoy reading about life of a very particular Victorian scientist and gentleman.

Down to Earth magazine, February 2017

In this first biography of this great force of Victorian science, Mark White provides a frank and fascinating discussion of Boyd Dawkins, his life, ideas, and place within the history of Quaternary science.

Although this book is an autobiography, the in-depth nature of its subject and the author’s academic writing style makes it likely to be more suited to university Palaeontology / Archaeology Departments or Libraries rather than the ordinary ‘Man in the street’. That detail notwithstanding, ‘Generalist’ historians with an interest in ‘Early Britain’ or ‘Cavemen’ could find it a useful addition to their shelves, while Public Libraries could include it in their ‘Prehistory’ section. Hobbyists interested in ‘British Pre-history’, Palaeontology or Pre-historic Archaeology may also find it of use as a reference.

In respect of the history it imparts, this volume is excellent.

Incredibly rich in research and yet eminently readable so that it draws you ever deeper to learn more, and with every fact comes a new question to be tackled... Simply read the story and enjoy the outcome, as with any good book.

Fascinating tale of the man who popularised the niche pastime of cave exploration. This is one "hobby" I'm quite content to let others partake in, I'll just wait to see the results on TV programmes - this book is a revelation!

Mark White is Professor of Palaeolithic Archaeology at the University of Durham and was previously a research fellow at Corpus Christi College, Cambridge. Mark specialises in the Lower and Middle Palaeolithic of Britain and in the History of Archaeology. He has published numerous articles and books as well as acting as a consultant to most counties in England, English Heritage and Natural England.